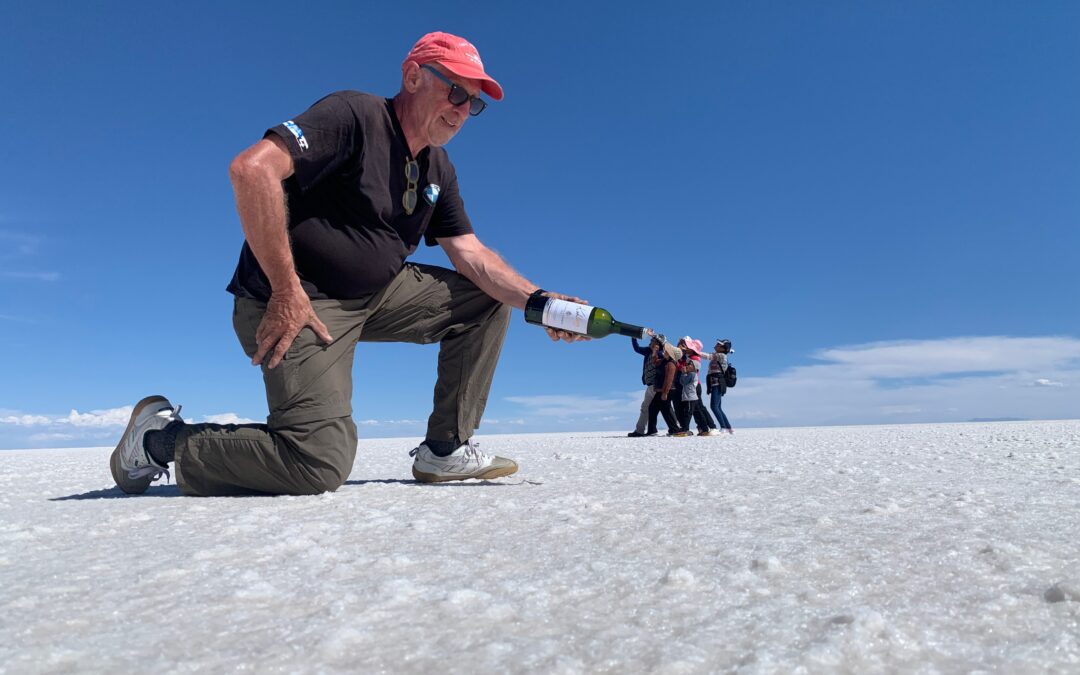 Uyuni is famous to outsiders for two things: its train cemetery and its ginormous salt flat — transport and minerals: the story of Bolivia, in so many ways.

The city’s main drag is called Avenida Ferroviaria and the raised median dividing the two directions of traffic is used to display bits of disused machinery related to the railways and/or to mining — including train engines small enough to run through mine tunnels and the ore-carrying buckets on wheels filled by the miners. There’s also a bright silver statue, very socialist realism in style, of a railway worker striding into the future, all muscles and confidence and wielding a monkey wrench, a train wheel beside him. I looked at it and thought, it could double as the Tomb of the Unknown Motorcycle Mechanic. Along much of the street, and in an elongated plaza off it, there are many restaurants and other outlets run by descendants of Chinese who came here, and to Peru, in the late 19th and early 20th centuries, lured by the promise of work in the mines or building the railways. A similar pattern of migration occurred in California. But the most common outlets — by far — are small tour operators, selling day trips to all there is to be seen. All the buildings are in the higgledy-piggledy regional style — that is half-finished: a single storey is followed by a five storey, is followed by a three storey, is followed by a single storey, is followed by a six storey, is followed by a two storey . . . and none of them remotely near completion above the ground level. Even then, “finished” may not be entirely accurate description.

Next morning, the street is knee deep in Toyota Land Cruisers, Nissan Patrols and other, similar four wheel drives, all with large roof racks and lashed down spare wheels and plastic drums containing extra fuel. You too can be an adventure tourist! For my day trip, I have been paired with a family from Oruro, a city about half way from here to La Paz. There’s Dad Freddy, an engineer I suspect partly retired, his wife Amelia, and their children, son Maurico (a student engineer) and daughters, Laura (an engineer) and Gabriella (a student engineer), and her son, Leonardo (an engineer-in-waiting, I suspect, and a right little chatterbox!). Our driver and guide for the day is Roger Copa. First stop is the Train Cemetery . . . 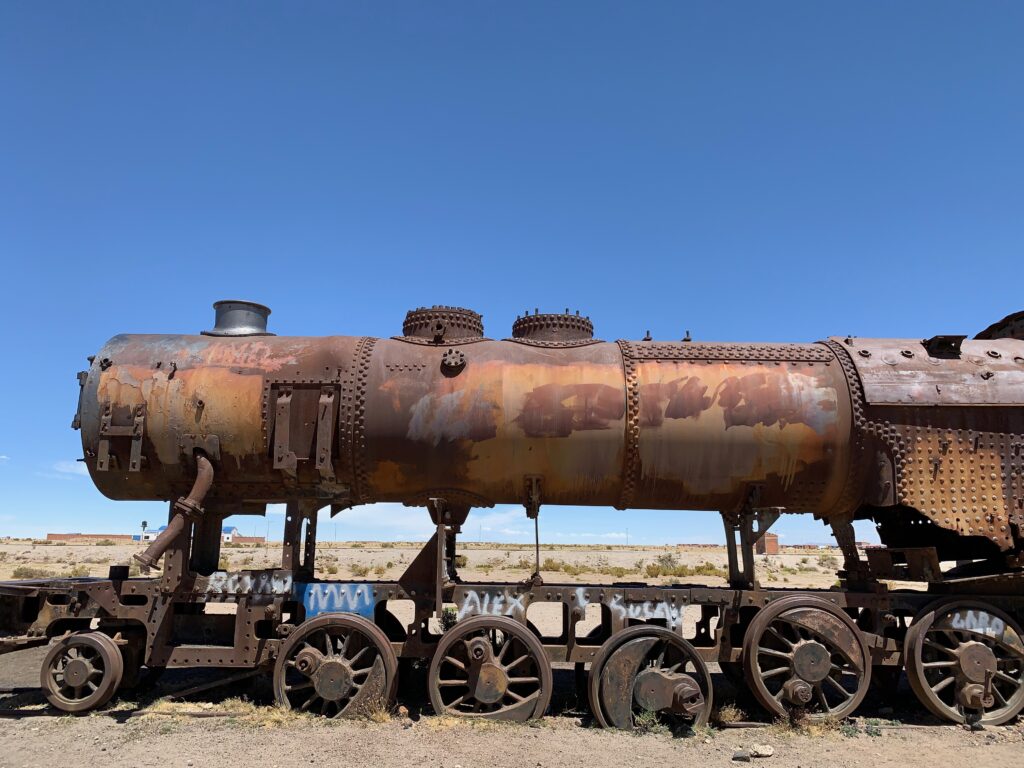 Once upon a time, there were great plans for Uyuni: it would be the hub of a trans-Bolivian rail network and a funneling point through which all goods in and out of the country would flow, via the Bolivian Atacama Desert. And then that war happened and Bolivia lost the Atacama to Chile while simultaneously, mining faltered and expansion plans were shelved. Uyuni tried to keep going, however, as a train maintenance hub but it all ground to a halt . . . leaving lots of trains, mostly European manufactured ones, high and dry as it were. And now they sit in the middle of the desert, right on the edge of Uyuni, slowing, very slowly, being eaten by the salty blowing wind off the nearby flats. They suffer the indignity of a million and one youngsters (and the not so young) clamouring atop them for pictures of themselves jumping up and, against a clear blue desert sky, getting their picture taken while making a V for victory sign. 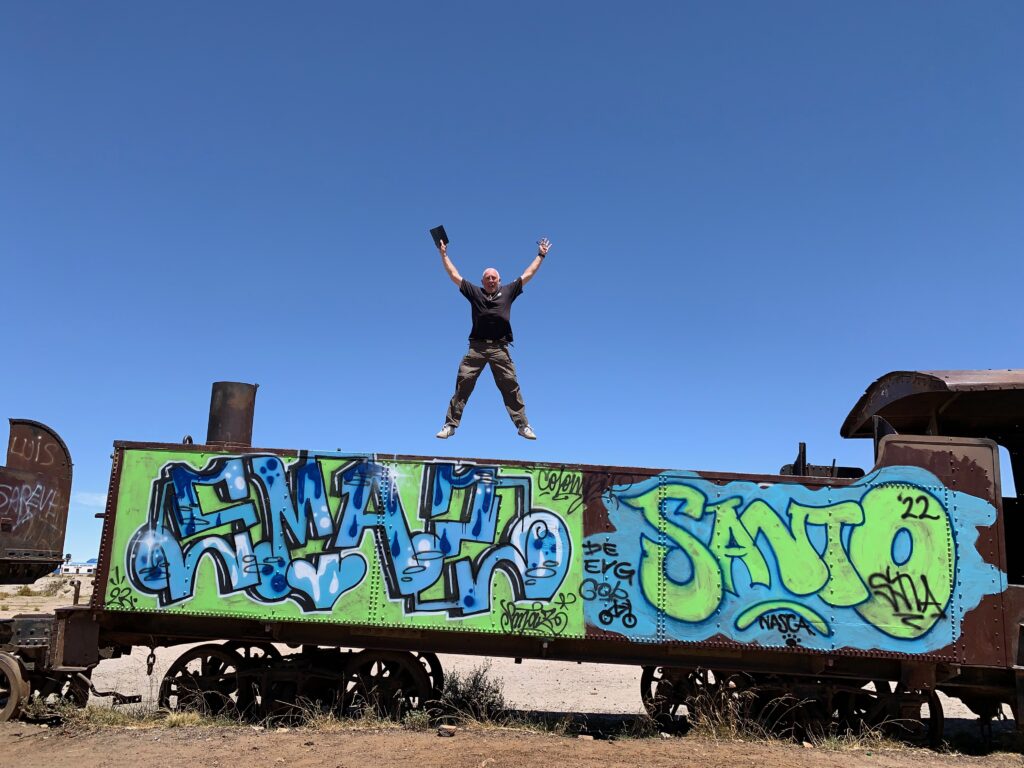 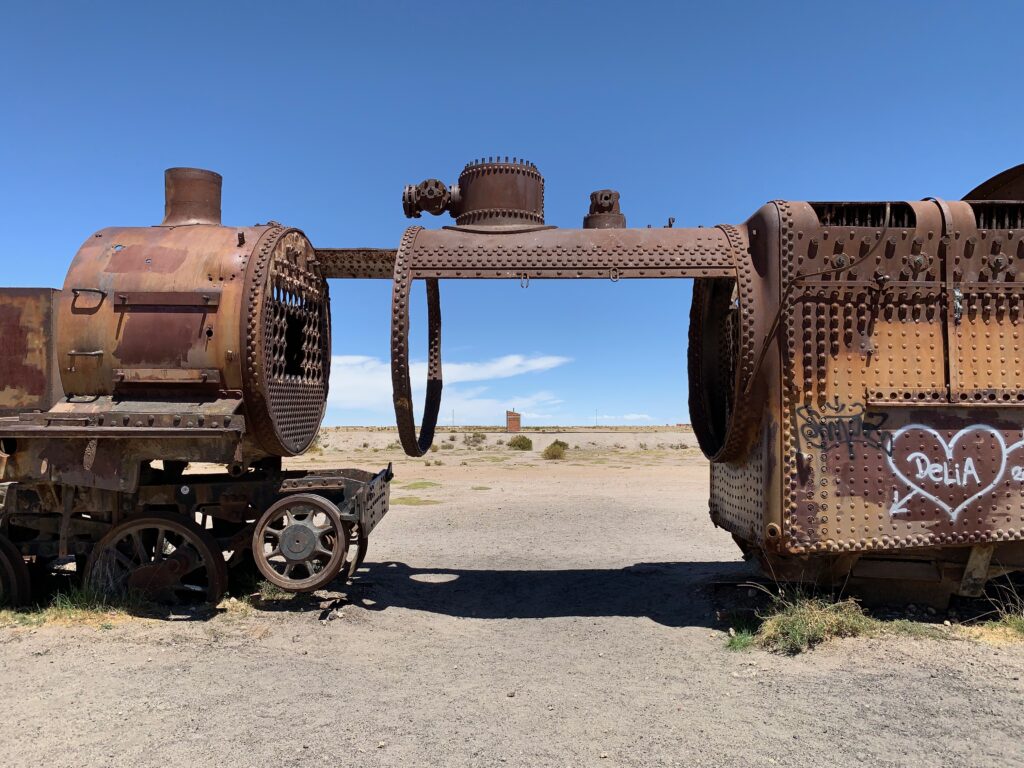 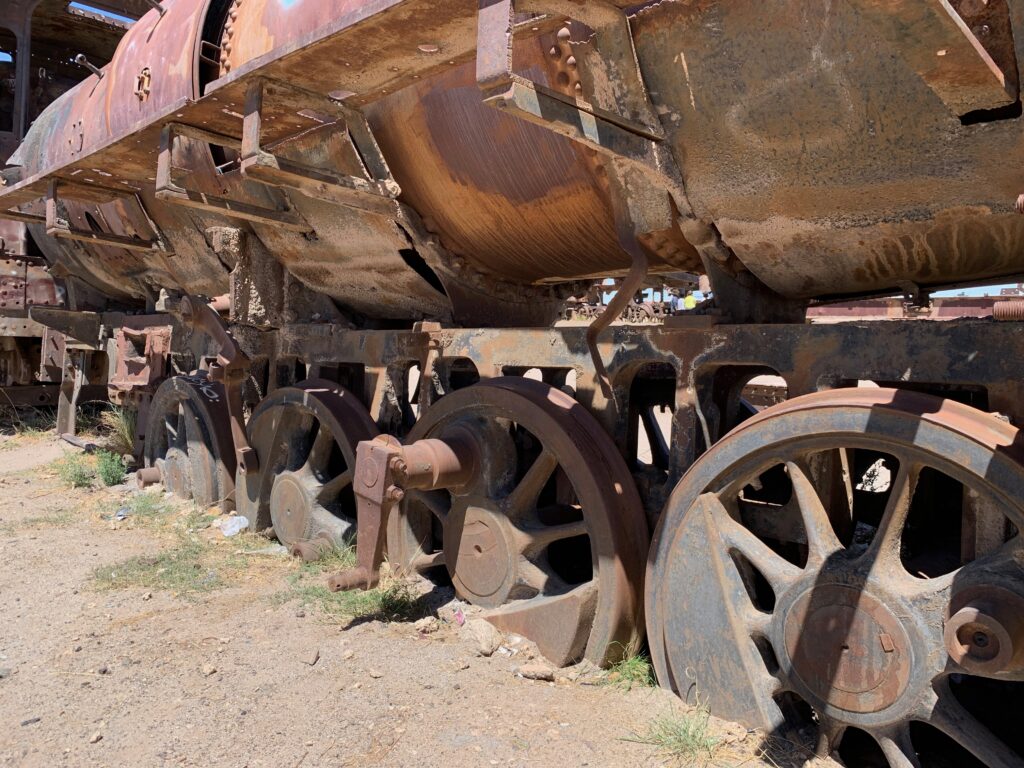 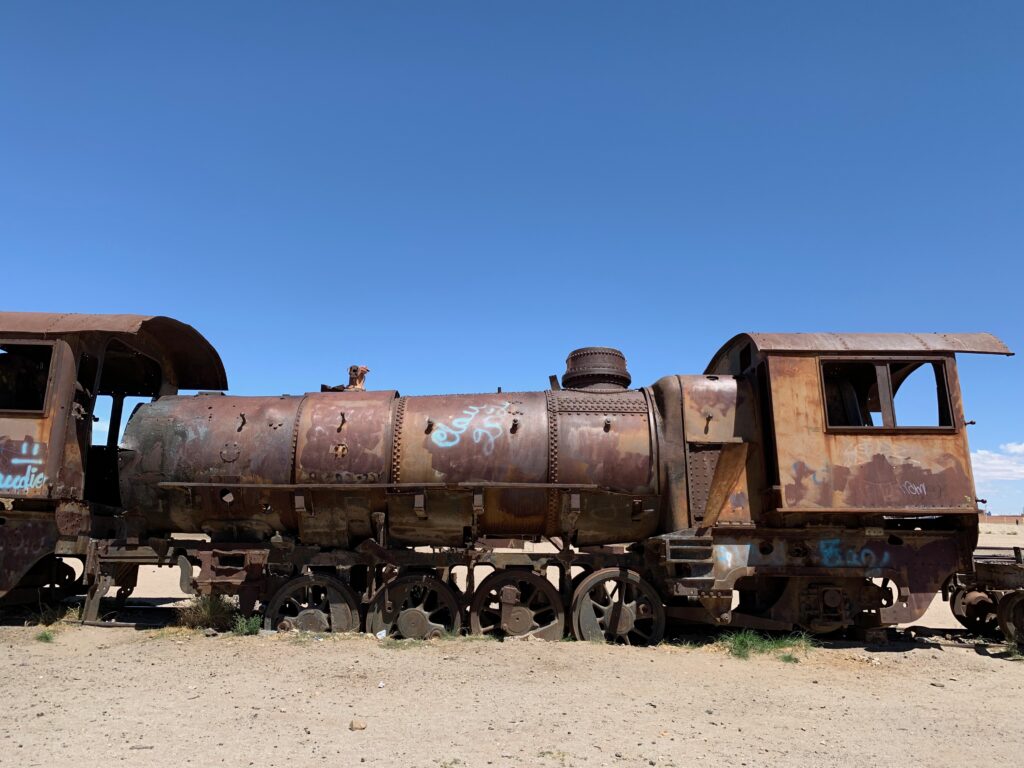 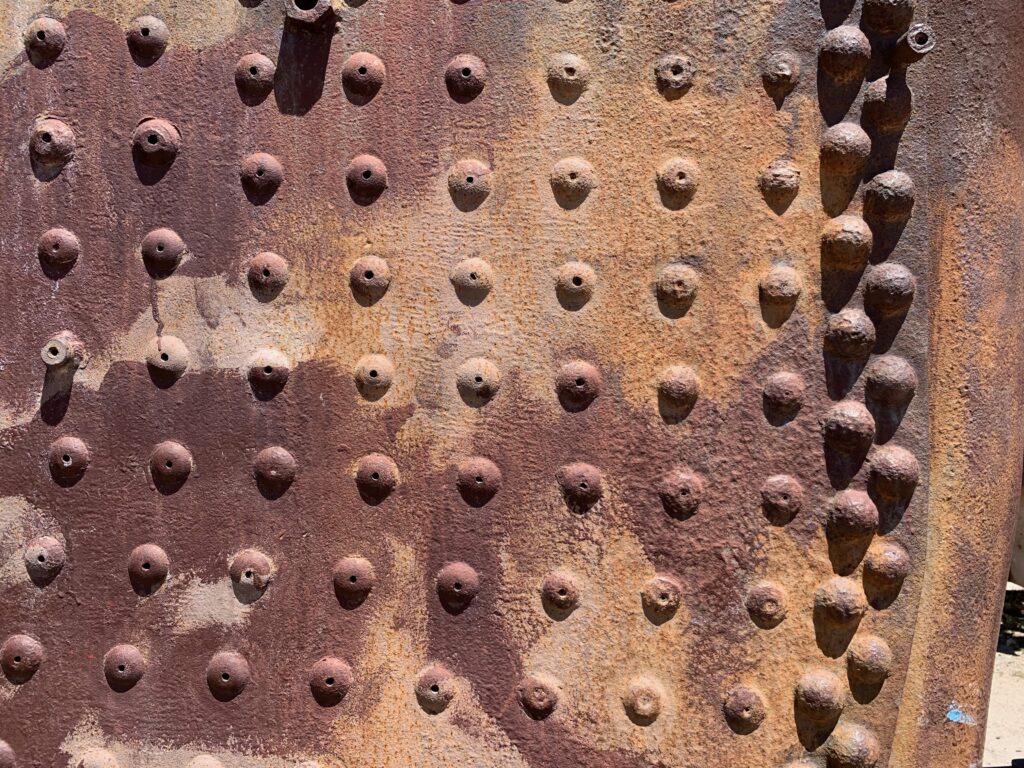 There are over 100 trains there, it is said. I didn’t count them but there are dozens of engines for sure and many carriages and bits and pieces of rolling stock lying about. The engines are wonderful, even if dead and a little forlorn. Made of large sheets of metal, mounded or buckled into shape, they are held together by big fat pop rivets of the sort you’d see Harland and Wolf shipyard workers smashing into place, red hot metal beaten with lump hammers. Anything worth taking — nameplates, bits of other metal like brass or copper — is long gone but you still get a great sense of what fine works of mechanical engineering these beasts once were. They lie on rails, their huge clunking wheels sometimes derailed and sinking into the sand. You can stand on the footplate and pretend to be a driver or a stoker. You can jump onto the roof and pretend to be Butch Cassidy and the Sundance Kid (who died in 1908 in San Vicente, about 100kms from here, their hostel surrounded by locals and police fed up of their payroll robbing) or you can just mosey about looking at the sad fate to which such great beasts of engineering have been reduced.

Uyuni’s nearby salt flat is a terrifying place. At 11,000 square kilometers, just eight of them would fit into Ireland. It’s the largest salt flat in the world, and it would be very, very easy to get disoriented while out on it and have difficulty getting to safety. 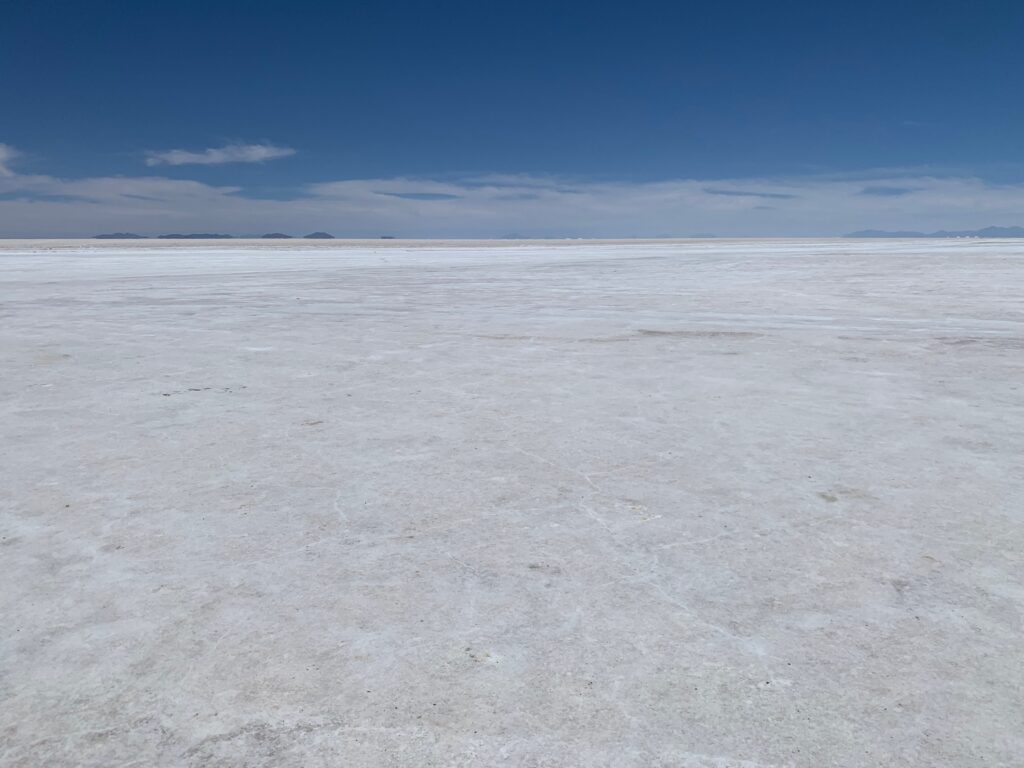 The great white nothingness of the salar.

Everyone locally calls it simply the salar and, truth be told, you could die or be very seriously burnt by the sun very easily, and very quickly. Approached from the train cemetery, the salar appears first like a white neon strip along the horizon, sealing the joint between land and sky. As one gets closer still, mountains in the distance appear to detach themselves from the earth, shimmer and float. Gradually, the neon strip expands, closes the gap between bleached white earth and sky, and driving onto it, the pure white salar takes over the landscape completely. Whichever way you look, there is nothing but salt flat, crunching underfoot and baked by an intense, merciless sun.

The salar, and the one in the Atacama near San Pedro, are enormous underground lagoons created when the Andes mountains rose at the whim of movements between two of the earth’s tectonic plates. The plates, which “float” as the earth’s crust and upper mantle, are forever rubbing off each other. In the case of South America, the South American plate, which is essentially the entire continent, abuts the Pacific Plate, knows as the Nazca Plate. The Nazca Plate is moving east and sliding under the west-moving South American Plate, pushing it upwards and thereby creating the Andes. In the process, existing lakes lost their outflow to the sea some 30,000 years ago but water from the Andes still drains into them, sometimes snow melt taking more than 10,000 years to percolate through rock and reach the lagoon, or flow onto the metres thick salt crust on top of the lagoon. Both within the lagoon and the salt crust, minerals, including lithium, have accumulated in dense quantities.

The meeting points of Chile, Argentina and Bolivia contain 75 per cent of the world’s known deposits of lithium which is now being “mined” by cutting out blocks of salt and treating them in ponds, leaching out the lithium rather like getting sea salt to crystalise in large evaporation pools of brine. It’s a controversial industry which opponents, mainly indigenous and environmentalists, argue damages an already fragile ecosystem.

Roger the guide drives us across the flat and it’s all very strange — no road, of course, and yet he follows a well-worn track to a point where an. enterprising local man has used salt blocks to make statues and a pyramid and charge tourists who want to wander about taking pictures. 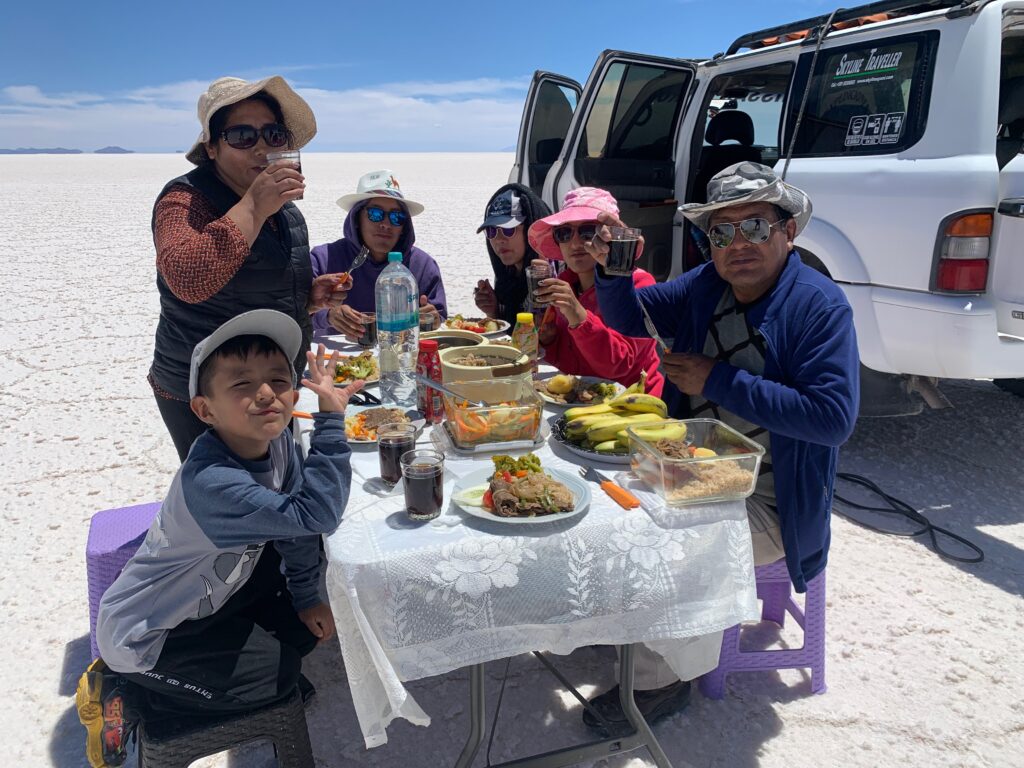 Anyone got any salt?

Next, we stop in the middle of absolutely nowhere, set up a table and munch lunch — in the middle of a vast burning white silence. After, we take lots of photos using the pure white backdrop and perspective for some trick photography. 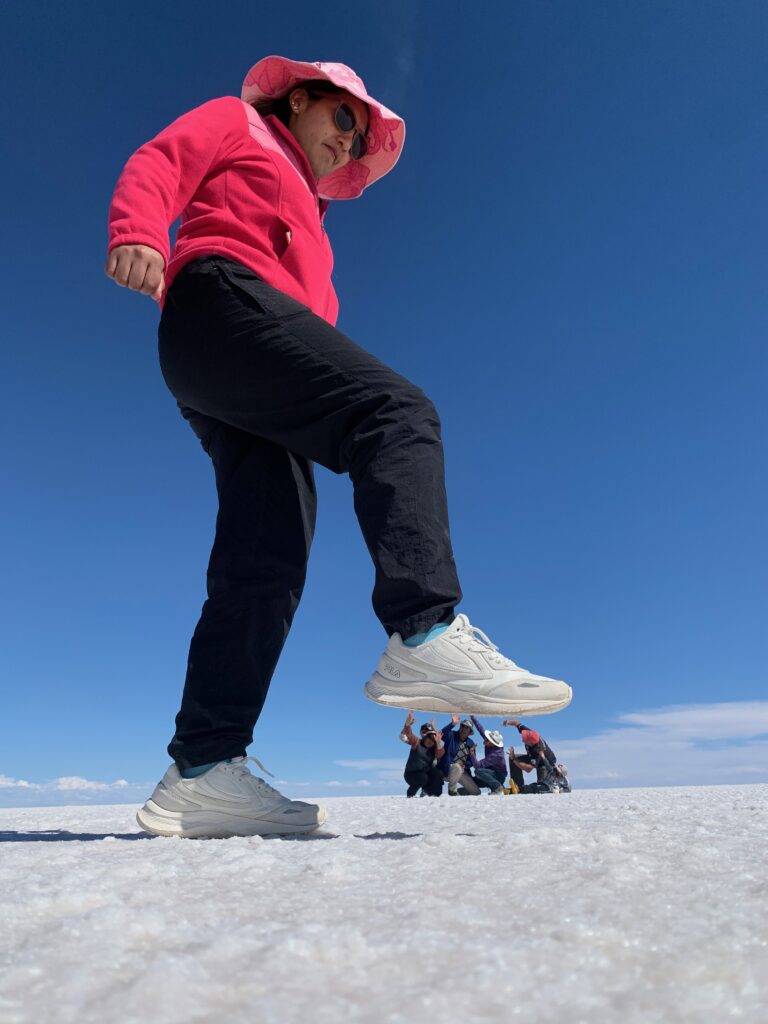 Then it’s off to an island, Isla Icahuasi, the top of as former volcano that got trapped, as it were, in the geological turmoil and now sits in the middle of the salar. It’s so strange: you drive out to it over miles and miles of salt, and, yes, it really is an island . . . of lava and cactus plants. And tourists, lots of tourists! 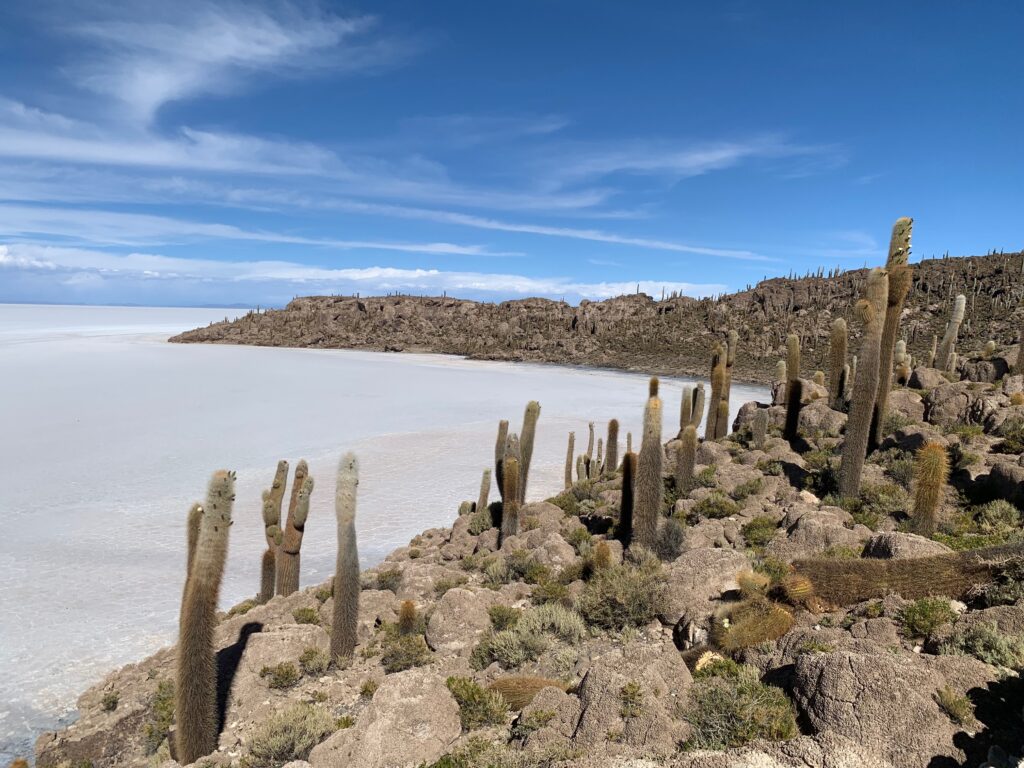 It is all very strange. In the distant whiteness, one sees little black objects, beetling across the vast whiteness — people, just like us, careering about in four wheel drives. When we go, there will be our wheel tracks and nothing more. There is nothing living here, nothing at all save for some organisms perhaps deep beneath the crystalline salt in the gloopy stuff way, way below us at the bottom of the lagoon. 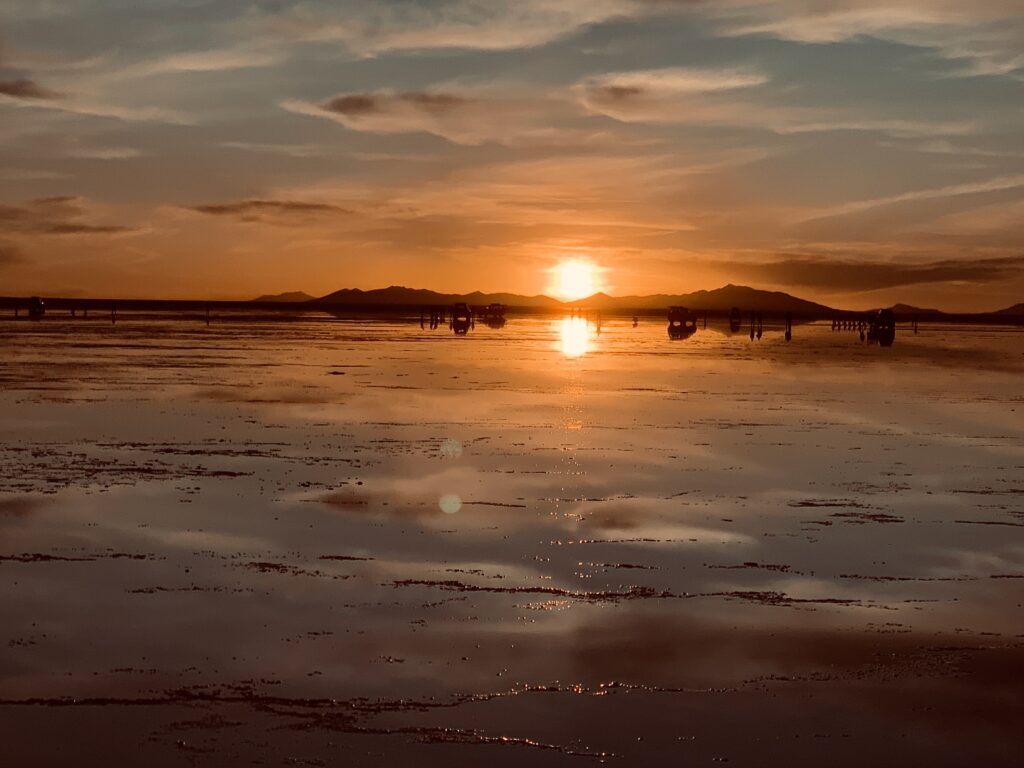 Sunset on  the salar where earth and sky reflect and merge into one.

Our day on the salar ends at sunset — a spectacular sunset during which the sky turns technicolour red and orange and the reflection of water atop the salar merges earth and sky into one vast saline nothingness. 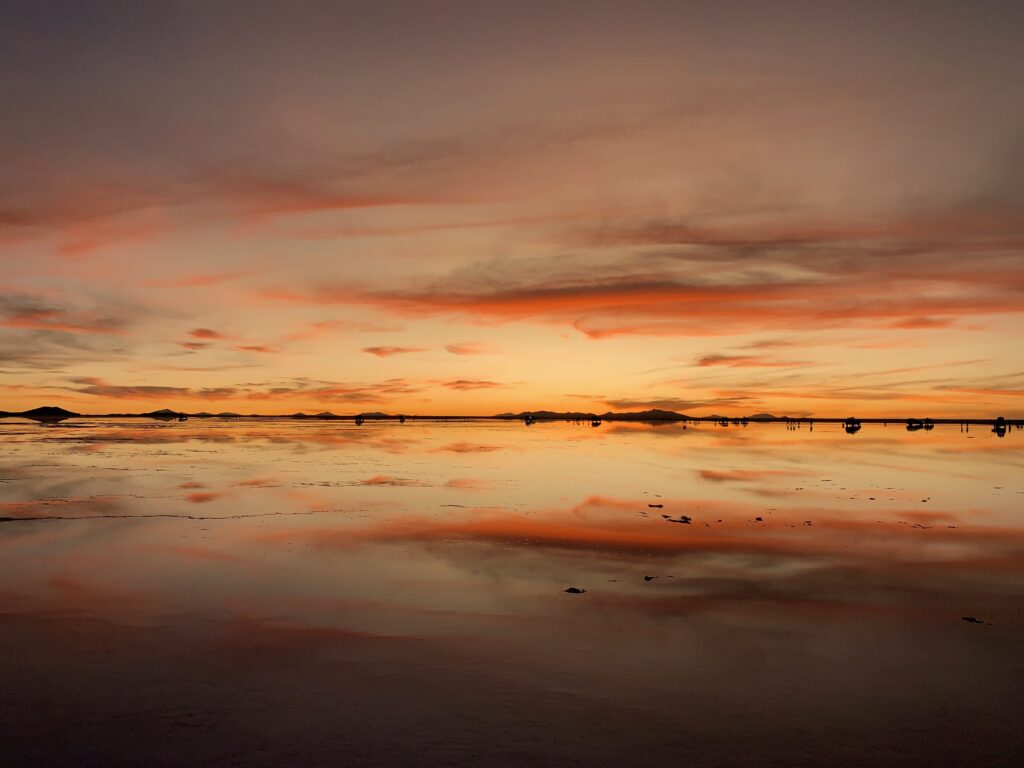 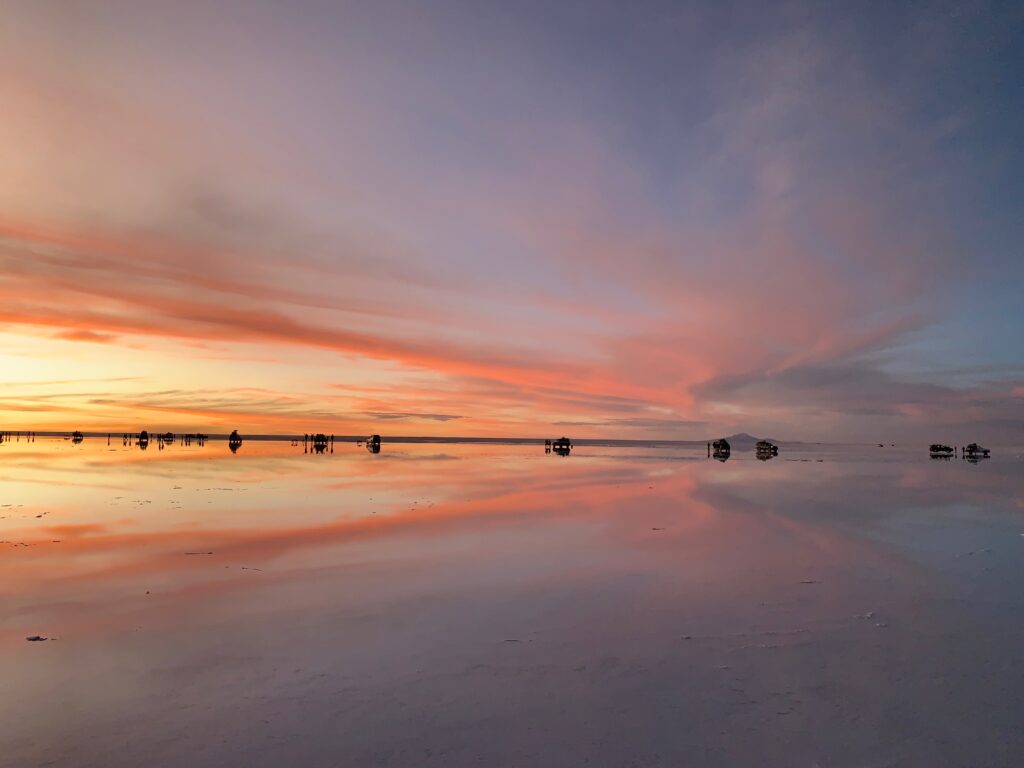