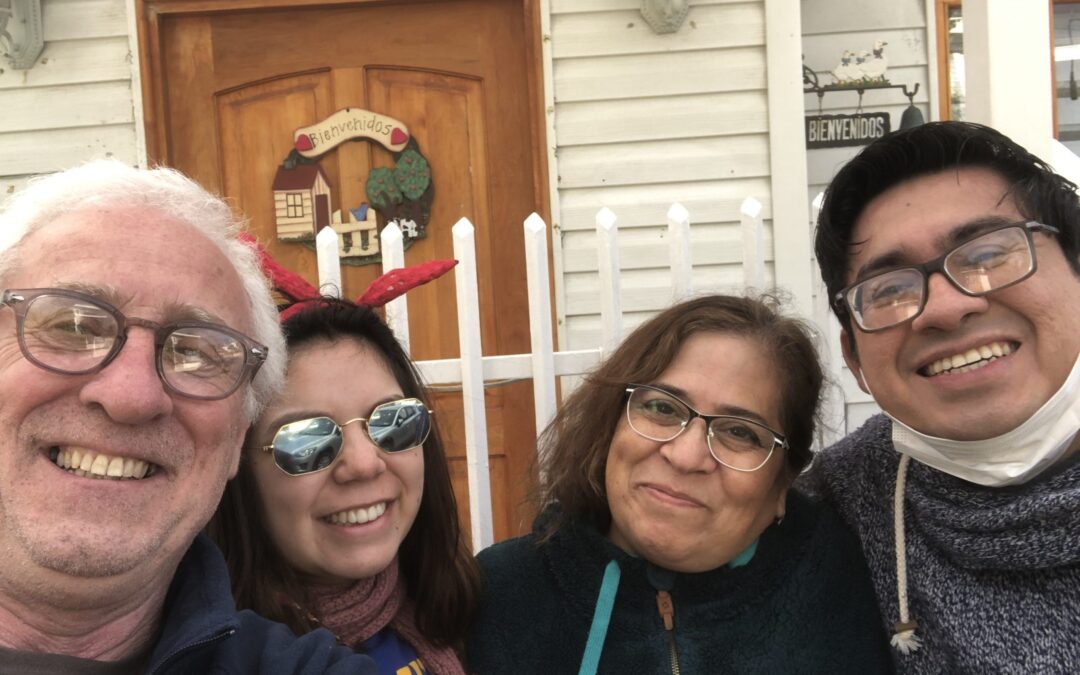 Having made it into Chile from Argentina just before the frontier was sealed to all transnational movement because of coronavirus, the question now was, “is there a way to move up the country?”

Chile’s southern-most region, the very bottom of continental America, is known as Magallanes y de la Antártica Chilena, and includes the Chilean part of Antarctica. The mainland part of the region, as it were, comprises three separate administrative units: Chilean Tierra del Fuego, with its main town Porvenir; then Magallanes, with its main city of Punta Arenas, where I am; and then west and northwest of here, Última Esperanza, with its main concentration of people living in the port city of Puerto Natales.

Confusingly, the Chilean island Isla Navarino and its small town of Porto Williams is included as part of the Antarctic administrative area. The rest of Chile, that huge, long country stretching right up to the Atacama Desert, the driest place on earth, is effectively cut off from the far south, while being physically connected to it by the Andes.

The longest mountain range in the world is effectively the spine not just of Chile but of all South America. After Puerto Natales and the Torres del Paine national park, the way north is blocked by the Campo de Hielo Sur, the Southern Patagonian Ice Field, through which there are no roads. So, having got myself into the far south and the end of the last road on continental America, how may I progress up the country, while not breaching any public health imperatives in the middle of a pandemic?

It seems that if I can get myself and the bike to Puerto Natales, it can get onto the ferry to Puerto Montt, a fabulous four-day cruise through fjords against a backdrop of the Andes and that great ice field. I cannot go with it, however, as the government has banned all foreigners from the ferries.

The road north out of Punta Arenas rises quickly to a plateau, Chile’s Patagonian steppe. The land is flat, stretching for miles in every direction and once more under that great big Patagonian sky, blue for me again but with cotton wool dollops of those great big fluffy cumulus clouds on the horizon. The wind is gentle as I head north, hope in my heart, anxiety in my head at the prospect of being separated from the bike, leaving a later rendezvous somewhat to chance.

Caption: A soldier checks a motorist’s temperature — 35 degrees is OK; 38 or anything above is not. Photograph: Peter Murtagh

The scenery soon takes my mind off worries. This is sheep country, and every few dozen kilometres, there will be a home, usually not more than a shack, maybe not even lived in any more. Sometimes there are small villages of maybe three or four dozen homes.

Around a quarter of the way through this journey, a lake emerges to my left with what appear to be flamingos. Closer inspection shows that they are.

Gangly, awkward looking birds that move with a certain hesitant grace but once airborne, they fly low with ease and poise. They appear almost totally pastel pink when standing in the water, necks bend down and bills snuffling along the floor of the lake hovering up edibles, but when they fly, the topside and leading edge of their wings are a bright, scarlet pink, while the underside and trailing edge feathers are jet black. They have a decadent beauty about them and are by far the most dazzling creatures in this otherwise bleak landscape.

Caption: The End of the World Highway . . . on a journey running out of road. Photograph: Peter Murtagh

About 70km from Puerto Arenas, the rode rises slightly to a ridge and the Andes appear in front of me. Dark, distant, some with snow caps on them, they deserve the application of that much abused word, awesome. I can’t wait to be close to them, to be part of them, to have them wrapped around me.

About 10km from the port city, there’s a line of cars and trucks stopped on the road. I move slowly along the outside of the queue towards the checkpoint. A soldier sees me and waves me to come, but to pull in left by the hut in the middle of the road, not behind the leading car in the queue.

It’s an army operation, with troops from the military’s Reinforced Regiment No 5 Lancers, plus trucks and what looks like a US-supplied isolation tent set up by the roadside.

The well-armed soldier and his half-dozen colleagues are all wearing surgical masks. One soldier has a clipboard and one of those small, hand-held temperature guns. He talks to the vehicle occupants, sometimes asking them to alight for temperature screening. They are testing people before going to the city, he says.

Happy to be tested, I wait my turn. Name, ID document, where going, where from? . . . the usual. I explain as best I can. The soldier in charge, a sub-lieutenant (I think), is very polite and not at all threatening, pushy or brusque. He takes out the temperature gun and takes the reading.

I’ll take perfect over normal any day. My reading is 35. I ask what’s not normal. “Treinta y ocho,” he says, adding that anything above 40 is a big problem: “Corona-veerus!”

And so, just when I think it’s going to be okay, the sub-lieutenant and the regional government fellow explain that I can’t enter Puerto Natales. Despite passing the screening test (my second in three days, the first being in a shop in Punta Arenas), and despite all my answers being fine, no foreigners are allowed into the port city.

I look at them blankly and say, very slowly, “Oh fuck!”

“Si, oh fuck,” the officer replies, adding, in very good English“Sorry but you have to go back.”

They’re nice guys, good guys doing a civilian back-up job that is not without its risks to themselves, however. They’re more than happy to pose for a snap beside the bike, which they seem to like, and with that, it’s back down the road – a 500km round trip.