A little bit of Germany in Chile. . . 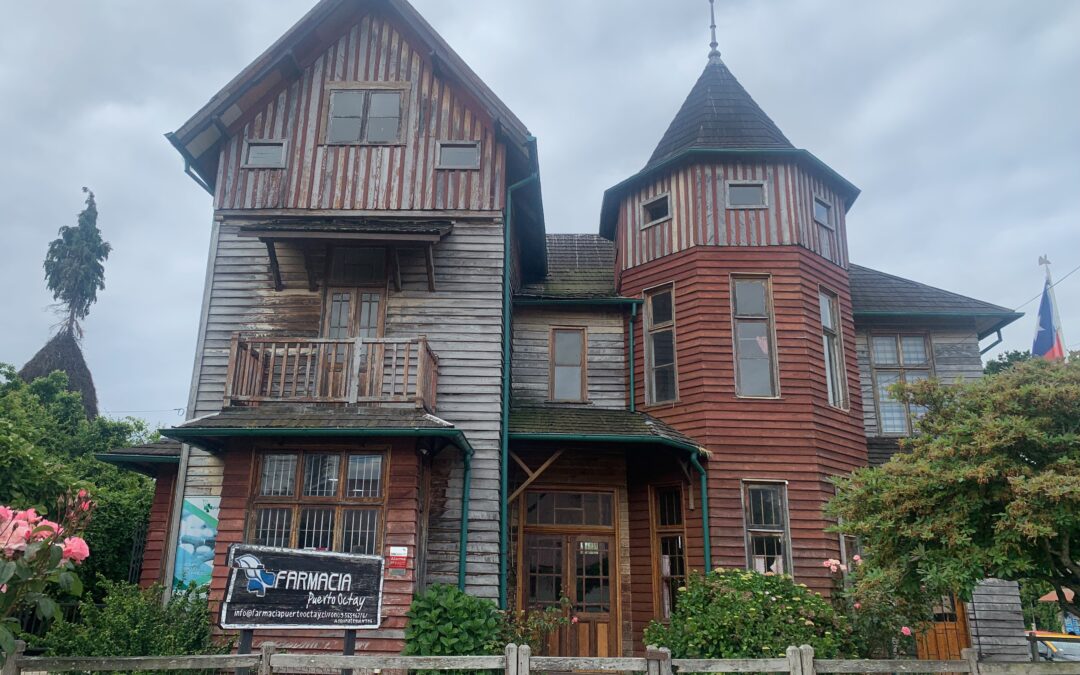 I am sitting on a bench in a campsite in Puerto Octay. It’s early morning, the sun is fighting to break through some dull, misty cloud and I’m feeling rather pleased with life.

This is a lovely little place.

I got here late yesterday afternoon from Hornopirén. Hornopirén is a fairly dusty seaside village near the northern end of the Carretera Austral, the road that joins Puerto Montt (in the north) and Villa O’Higgins (in the south) and essentially links Chile’s lake district and Patagonia. In Hornopirén I got my second puncture repaired. . . but that’s another story.

So I set off, heart in mouth waiting for the next deflation but now that I am off the gravel roads — at least until I head back into the Andes, or find them once more in Bolivia or Peru, which I surely will. I think I will have to replace the tyres as the rear one now has two patches in it and clearly isn’t up to the rough unpaved roads when they present themselves. After Hornopirén, the road was tarmac and after about 40 kms, and a short ferry crossing, I was in La Arena and heading on to Puerto Montt.

It is difficult to explore a city of almost 300,000 people when riding a fully loaded motorbike which, self-evidently, can’t be parked to allow for my favourite hobby — wandering about I place I don’t know and finding things of interest. Plus, it was raining heavily and so I decided to give it a miss and carry on. My main target in this region of Chile is Osorno, about which I’ll write another time.

What caught my eye as I went down the motorway — a motorway! — was a sign for Lago Llanquihue, who’s name suggests some Welsh connection but I don’t know if that’s the case. The first town on the lakeshore was Llanquihue itself and, far from displaying a Welsh heritage, it looks as though it wanted to be in Bavaria. The architecture, the setting, and hence the whole feel of the place is Germanic, with many buildings, especially the more modern ones, presenting a sort of Teutonic solidity. 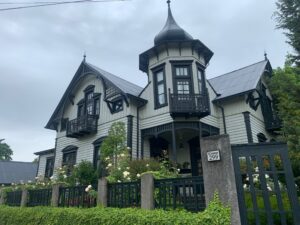 One of the more prominent German-style houses in Llanquihue 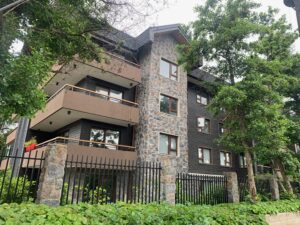 Even the modern architecture exudes a Teutonic solidity

As you ride down a steep hill into the main square, you are invited to drop into the Club Alemán which indulges in gothic typeface and tells visitors to a Facebook page that shortly it will host a “Weihnachtsmarkt”, also known in Germany as Christkindlmarkt. The club’s logo includes the German coat of arms, that splayed black eagle, head turned sideways. A large sandwich board outside the club entrance advertises bratwurst. None of this is so very different, of course, to the legion of global “Irish pubs” flogging nostalgia for the old sod — whether to the Irish abroad, to locals or foreign tourists who, in Chile or wherever, fancy a night of “Irish”.

Much of the story of German migration to this part of the world is told here — https://en.wikipedia.org/wiki/German_colonization_of_Valdivia,_Osorno_and_Llanquihue — and I’ve no reason to doubt the essential historical accuracy of Wikipedia.

The German influence is visible in architecture from as far south as El Calafate (in Argentina) and then, when I crossed back into Chile near Cochrane, right up through Chile’s northern Patagonian region and into the country’s lake district, where I am now. Part of the attraction, for the 19th century migrants must surely have been the landscape. The topography of the Chilean Andean slopes is not dissimilar to what one sees in Bavaria, but also in Switzerland, Austria and Slovenia. And the style of homes and farming reflects that — lots shallow pitched roofs with gable overhangs and long balconies, fir tree forests and cattle grazing grass meadows that slope down from the lower treelines or along valley floors, and field fencing that is visually Alpine and those stacks of well-cut timber for winter heating. What attracted a later generation of German migrants was a little different — the cultural familiarity of where they were going was surely a huge part of it, of course, but more compelling was the isolation and hoped-for obscurity relative to what they were leaving behind.

The current generation of German-Chileans seem to me to be very much part of where they are, rather than miserably trying to keep alive what they, or their ancestors, used to be. And that includes Otto, who runs a very Bavarian-looking hostel in Puyuhaupi, complete with two flagpoles — one for the Chilean flag (La Estrella Solitaria), the other for the horizontal yellow, red and black tricolour of modern Germany. They are all Chilean now but, like the Irish in America, they keep alive a sense of who they were. 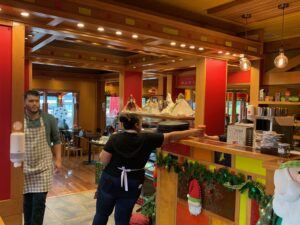 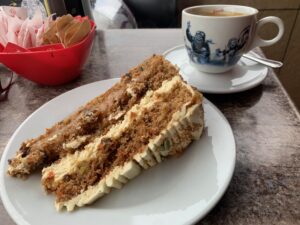 In Llanquihue, I managed to acquire a pliers (I now know the Spanish for pliers is clicantes, something I probably won’t need to know again. . .) to adjust one of my wing mirrors. Perhaps more memorably, I stopped at a German-looking cafe and had a slice of carrot cake the size of the Sudatenland. Further along the coast, I came to here, Pto Octay, and spotted the El Molino campsite sign.

For €10 a night, I have a lakeside perch where listen to the teros, the southern lapwings that scamper in fits and starts about the muddy bits at the water’s edge, squawking to each other. What really makes its presence felt is the bandurria, the buff-necked ibis. This chicken-sized fellow has pink legs and grey wings and a black torso or lower body. His neck is russet brown/gold and he has a brown cap, and a long, curlew-like bill.

But what distinguishes him more than anything else is his endless chattering — his yakk, yakk yakking. Either alone or often in pairs, they like to perch high in trees or on roof tops and, especially in the early morning from about 5am on, or late afternoon/early evening, indulge in non-stop yakk yakk yakk yakkedy-yakking. Its not annoying but man, are you aware of it!

The sound accompanied me this morning as I wandered around Pto Octay looking for some eggs for breakfast. The lake on which the campsite sits is like a large village pond and, like so many other places in Chile, the public space has been tastefully developed as a leisure spot, to sit and relax looking at the water and the birds, and it is all well maintained. Up through the town, and immediately one is struck again by the German-cum-colonial-cum-old style building — one of them, the former (or so it seems) Hotel Haase, is just aching to be restored to its former grandeur. It exists on Booking.com so it may still be functioning but not, apparently, at present.In fact, when I pass later in the day, it is open — but not as a hotel, just a restaurant and then only till 7pm. 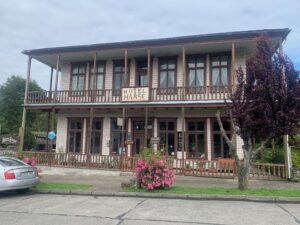 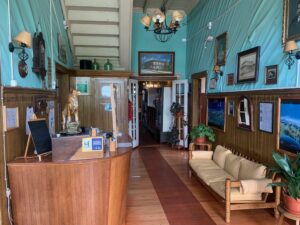 The inside is beautiful; full of old world, down at heel charm but still noticeably the family home and business it once was. Photos of the man and woman who made it what it was are in the hall and the lady on reception allows me wander and take some photos. It really could be something very special. . . in the right hands. 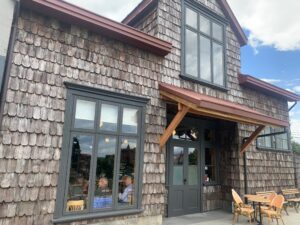 Later still, I have a coffee in the coolest cafe in town. It is owned and run by Pauline who tells me that it used to be a workshop (I think for vehicles) and a shoe shop. She opened first in February 2020 but had to close, because of you know what, but is open again. She gave me a tip which I hope will make another story . . .a bit later.

Some of the buildings in the town have tin roofs, some have shingle-covered external walls; all have a sort of shabby-chic appeal to them. They also remind a little of parts of New England. In the right hands, the entire place could obtain Unesco World Heritage status. I think it deserves it. . . 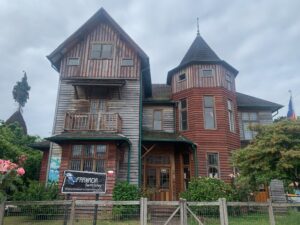 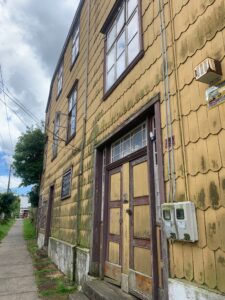 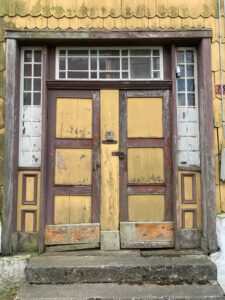 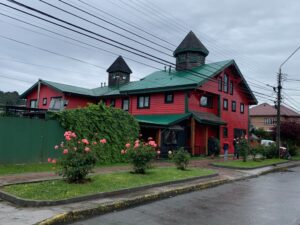 A prominent and brightly painted place 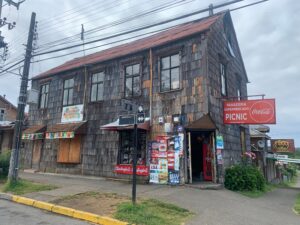 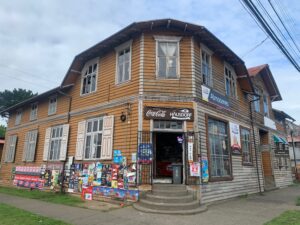 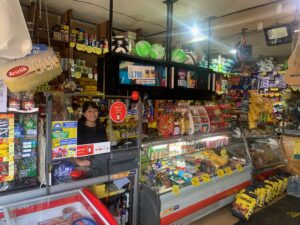 Fernanda behind the counter

In one of the innumerable m ini-markets, Fernanda sells me three eggs and asks when I’m?

And we both agree it’s a long way from here.