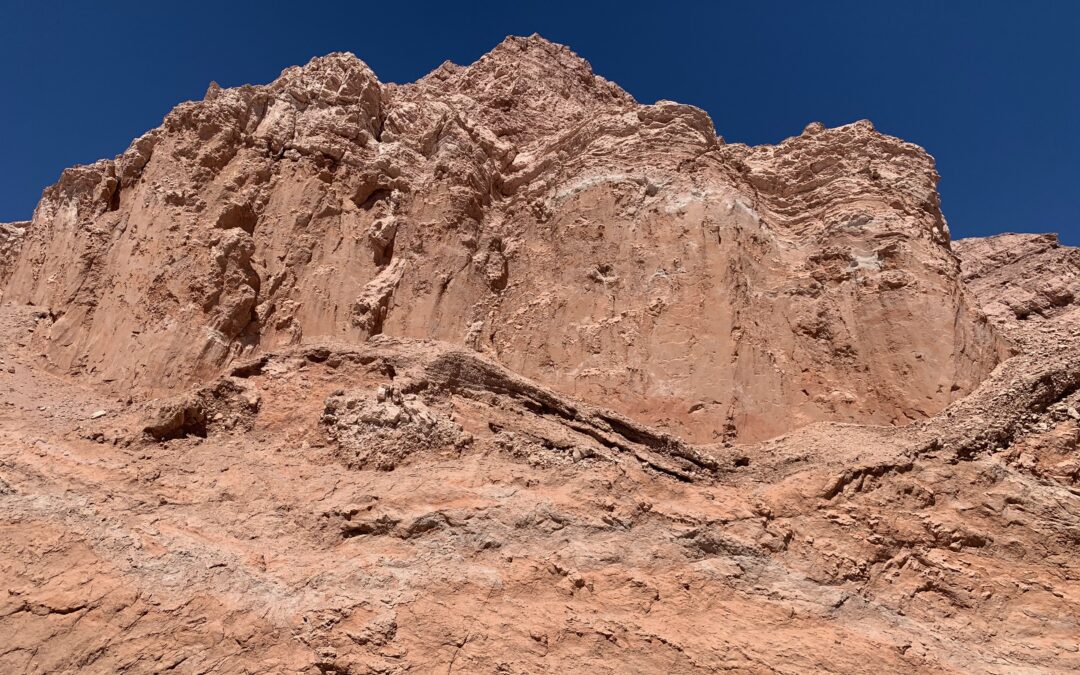 Having entered the Atacama Desert — the driest place on Planet Earth — by following the Pacific coastline, I now turned inland and headed for Calama and, ultimately, to San Pedro de Atacama. San Pedro is the center of tourism in the north Atacama and a backpacker haven. Calama is yet another dusty city of about 200,000 people and exists really only for one reason — the mine at Chuquicamata, the largest open cast copper mine in the world, and to serve other mineral extraction operations in the region. Chuquicamata is, simply, a vast, vast hole in the ground with resultant mine tailings the size of mountains.

San Pedro is about 100 kms south-east of Calama, close to the border with Bolivia. The road crosses a desert plain before dropping into what is essentially an oasis. The way down is through Valle de la Luna, the Valley of the Moon (pictured above). Everyone stops there to gaze in wonderment at the aptly named, utterly barren mountainous landscape that has been sculpted by heat and wind. 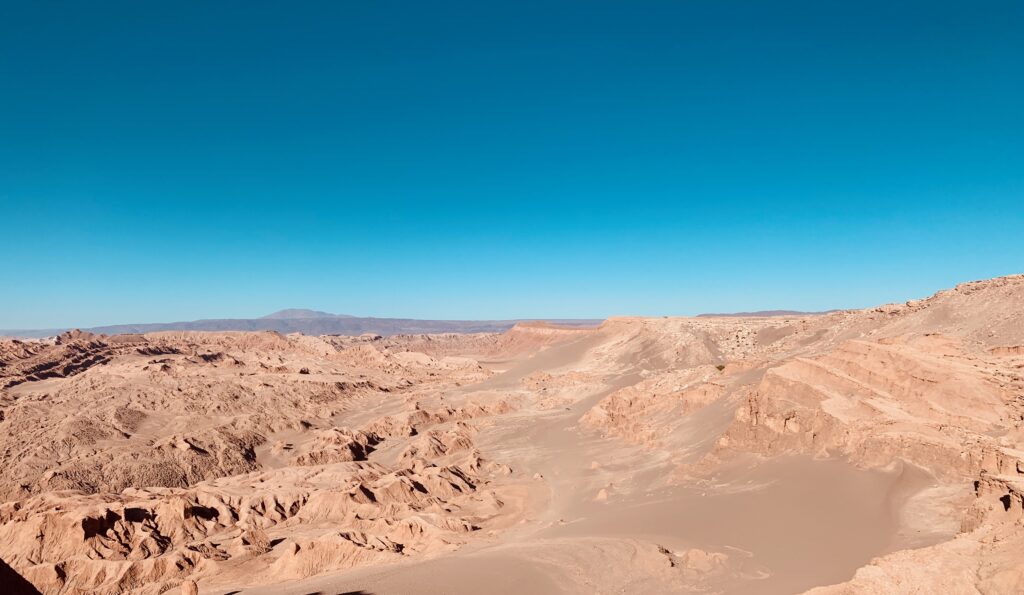 San Pedro itself has been lived in for about 8,000 years. The town and surrounding area has a population of about 11,000 people, about half of them are indigenous Lickan Antay. The area was in fact comprised of 18 different settlements, each with their own way of doing things and sense of identity but which gradually grew into one organic socio-economic unit called an Ayllu. That whole order was irrevocably changed, of course, with the arrival of the Spanish and today, San Pedro trades on its ethnic past and its location as a magnet for tourists. It’s a jumping off point for adventure.

The little town has a few shady enclaves where trees have grown sufficiently to provide shade for outside eating but mostly, the hardened mud, narrow streets are lined with single storey, white painted adobe terrace houses. In the center, around the main drag which is named Caracoles, every single outlet is either a tour operator, a restaurant or a shop selling souvenirs. San Pedro might just also have the highest density of backpacker hostels anywhere. An arcade beside the municipal offices near the church is reserved for indigenous people selling their souvenirs; on the pavements of Caracoles, latter-day drop-outs try their luck selling bead brackets and other hand-made trinkets, usually involving copper wire and bits of rock.

The tour operators flog bicycle trips to the nearby Salar de Atacama, the largest salt flat in Chile and one of the largest in the world, minibus rides to the geysers at Tatio, high in the Andes close to the Bolivian border, to moon valley and its sister nearby, the Valley of Death, and also night-time star gazing expeditions. 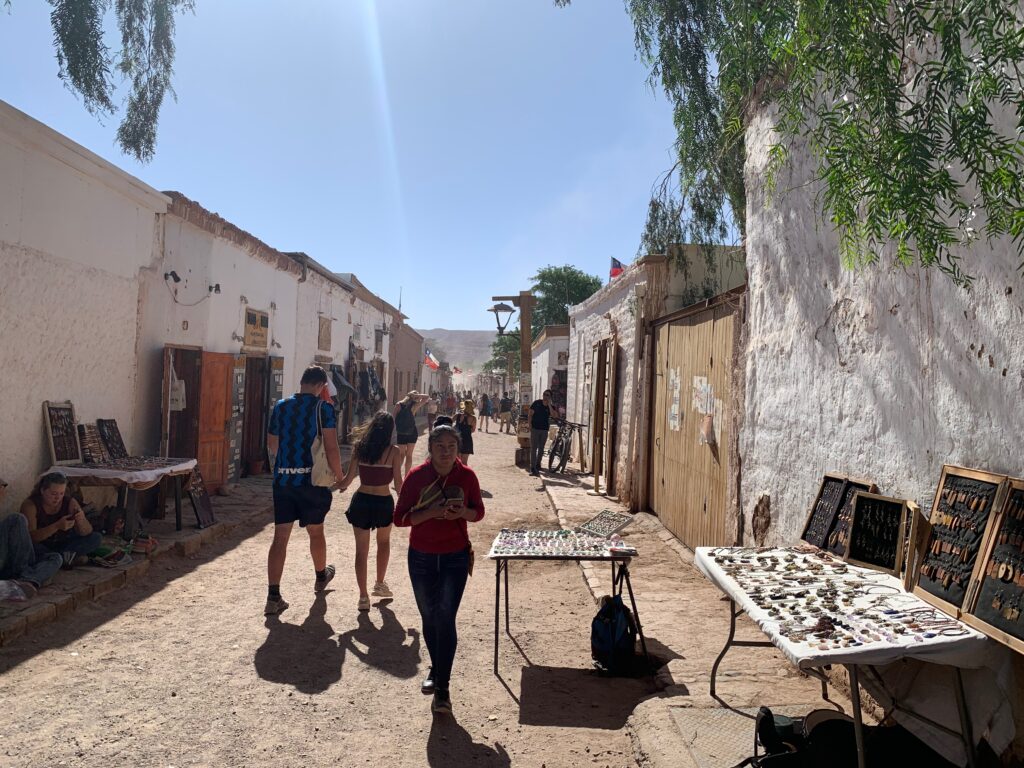 The Atacama is famous for its clear nights and moisture free atmosphere that adds enormously to the clarity of what can be seen above. Fifteen minutes east of the town, is the entrance to Alma — the Atacama Large Millimeter Array — an assembly of antenna looking deep into space and trying to understand better what goes on there, as well as the origins of our solar system. Ireland is one of the 22 countries participating in, and helping fund the project, albeit to a modest degree. 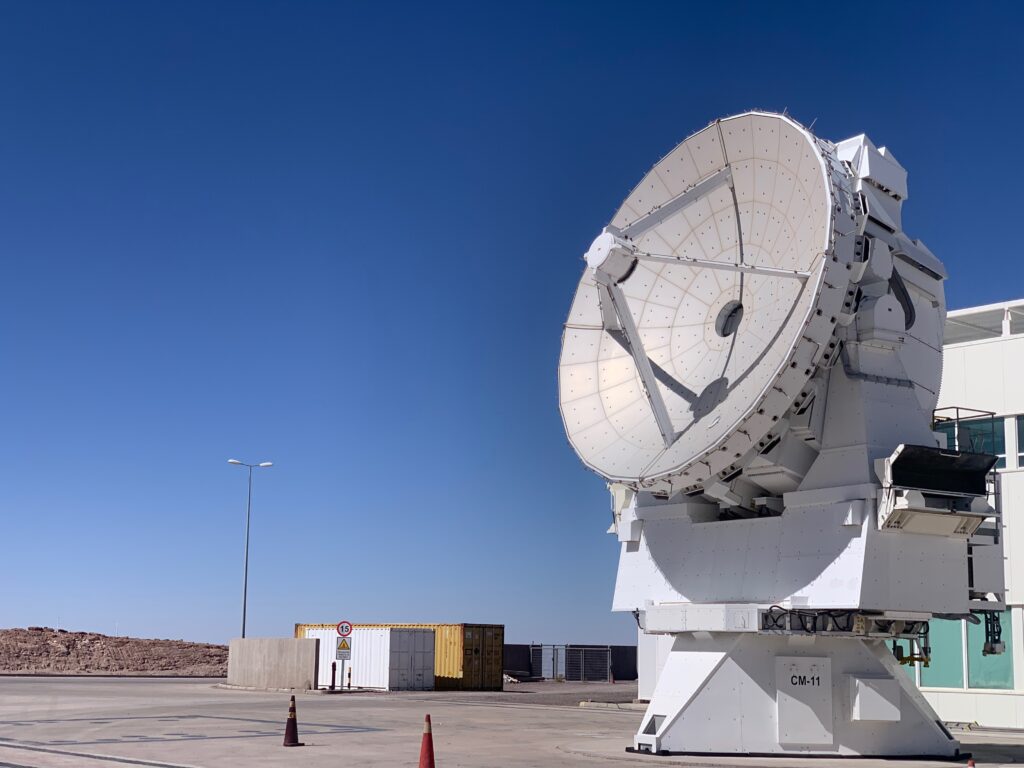 One of Alma’s huge antennas in for routine maintenance.

Alma is the largest collection of space observing antenna on earth and assembled at the highest altitude. Sixty six mobile antennas, 54 of them with 12 meter diameter dishes and weighing up to 110 tons, trundle around 5,050 meters up the Andes, looking at the universe just after the Big Bang. I met Alma’s director, Canadian astrophysicist Sean Dougherty, at the Irish embassy in Santiago (his mother came from Tyrone) and asked could I visit. He kindly said yes and assigned me to Danilo Vidal, the project’s community and media relations man, and something of a star-gazing enthusiast himself. 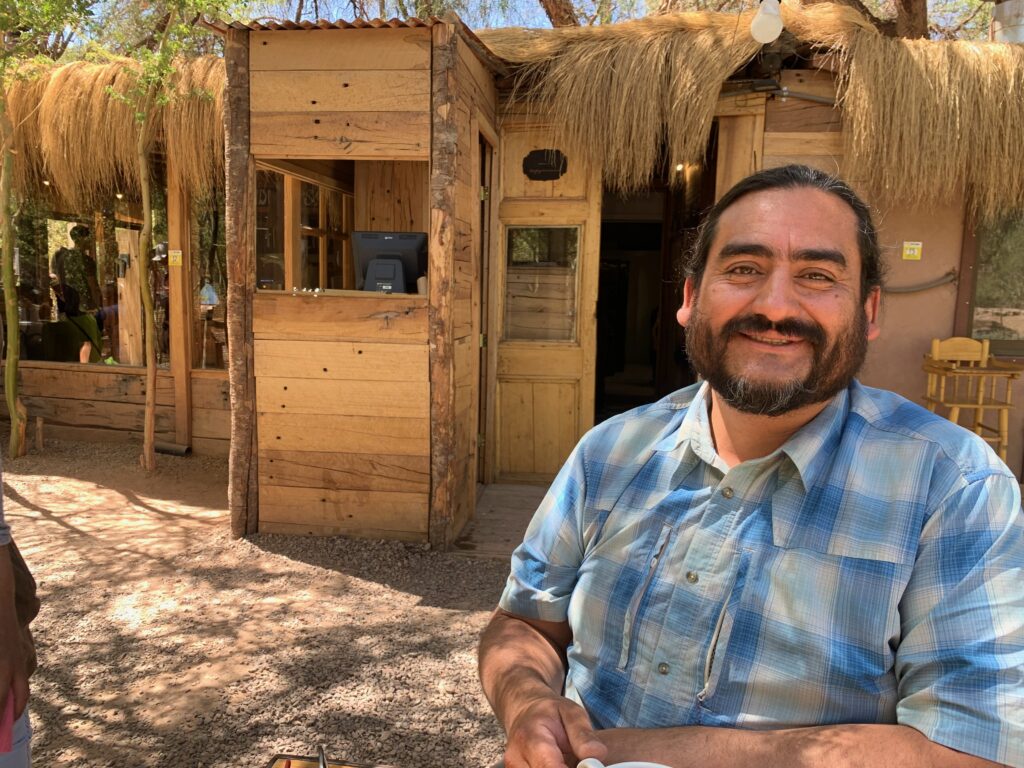 We met one morning in one of those shade draped cafes and chatted. Danilo is fantastically enthusiastic about… well, just about everything in life, I suspect, but definitely about Alma, astronomy and electromagnetic theory. He has a vivid way of expressing complex matters — “We can’t touch light, but light touches us”, for example. He gave me a kindergarten lesson in electromagnetic theory and, to be brutally honest, I’m still little the wiser, which reflects only on me! Danilo had a great way of characterising the pioneering of the early theorists — 19th century Scottish mathematician James Clarke Maxwell, for instance, who came up with the notion of electromagnetic radiation. Danilo said: “He was alone in the world because no one [else] could understand his work.” Well, he was garlanded with peer awards in his lifetime but what a great way of characterising the lonely quest for scientific knowledge that often upends conventional wisdom or illuminates in ways we hitherto could not have imagined.

Alma’s observations are all about the light spectrum. For the human eye, that is everything from violet, at one end of the spectrum, through to red at the other. Beyond violet is ultra-violet, which can kill us, X-ray and gamma light; and beyond red is infra-red, which we can’t see, millimeter light, and on all the way through to radio, which is actually light, not sound. The human eye, indeed the eyes of all mammals, can detect one particular wavelength of light which is only capable of traveling through water with is why, ipso facto, we must have evolved out of water.

“Alma uses the red end of the spectrum to look into the universe,” Danilo explained. “Everything in nature is emitting light and the question is how much energy is being emitted. Alma can detect that faint light that was created a few million years after Big Bang.”

I asked him did he think that a god fitted in anywhere in all of this?

Science was about the nature of things, he replied, religion was about the meaning of things. “There is some space for God, so long as we don’t have to have proofs,” he said. Which is, I suppose the essence of faith.

We drove to the entrance to the Alma complex. Security is tight: no one gets in or out without details being taken. As we pass through the checkpoint, not far away Volcán Láscar (5,600m) is puffing. “The last time it erupted was about two weeks ago,” Denilo says as we drive up, through the barren desert landscape, the road taking a gentle elevation into the mountains. Behind us the vast, 300,000 square kilometers Atacama Salt Flat is opening up to view. 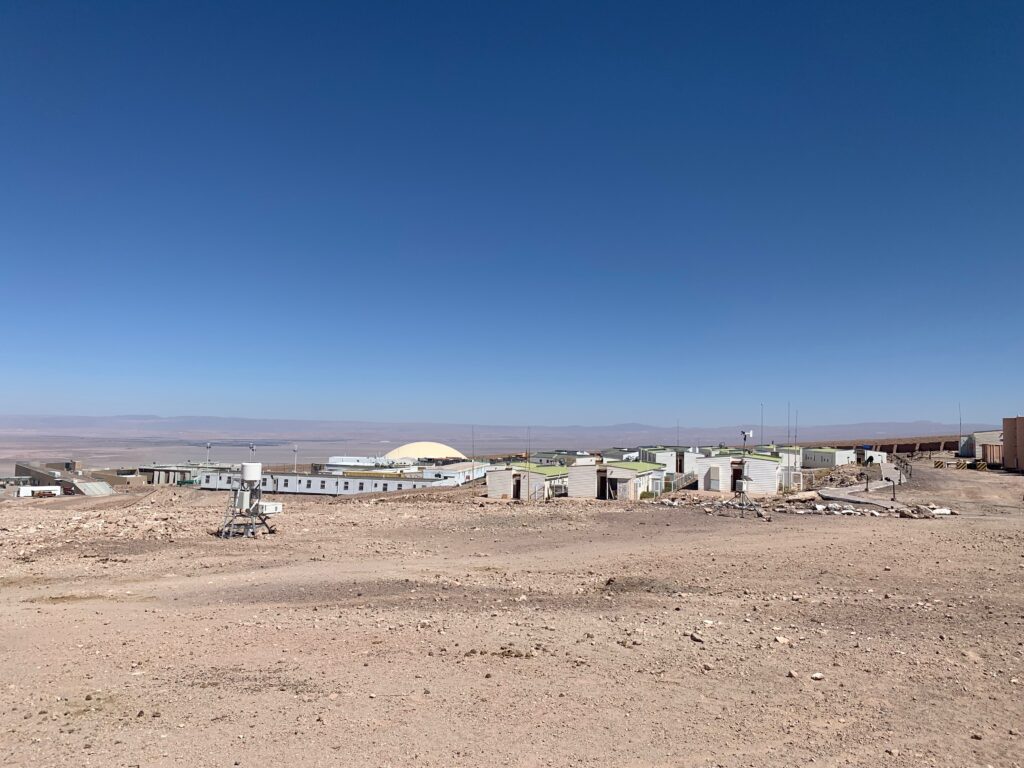 First stop is OSF, the Operation Support Facility, which does what it says on the tin. To describe it as a city would be an exaggeration but spread over many acres are a series of low lying, mostly rectangular modern buildings set into the flank of the bare mountain and sitting at 2,950 meters above sea level. It looks a bit like a cross between an Antarctic scientific research station in the sun and Blofeld’s lair. There are some offices and an accommodation block for scientists and technicians. There’s a well-equipped medical station, ambulance and oxygen store, and the capacity to evacuate in the event of emergency. There’s also a power plant so Alma is immune to problems that could attend the wider Chilean supply system.

Much of the space is given over to servicing the key component parts of the antennas — their eyes, as it were. In sterile conditions more like an operating theater than a maintenance workshop, a complex array of 10 individual lenses, each relating to the other and covering all desired viewpoints, is examined after every 10,000 hours of use. The workshop operates under conditions of positive pressure so that dust is always being expelled from the room, rather then not allowed in. 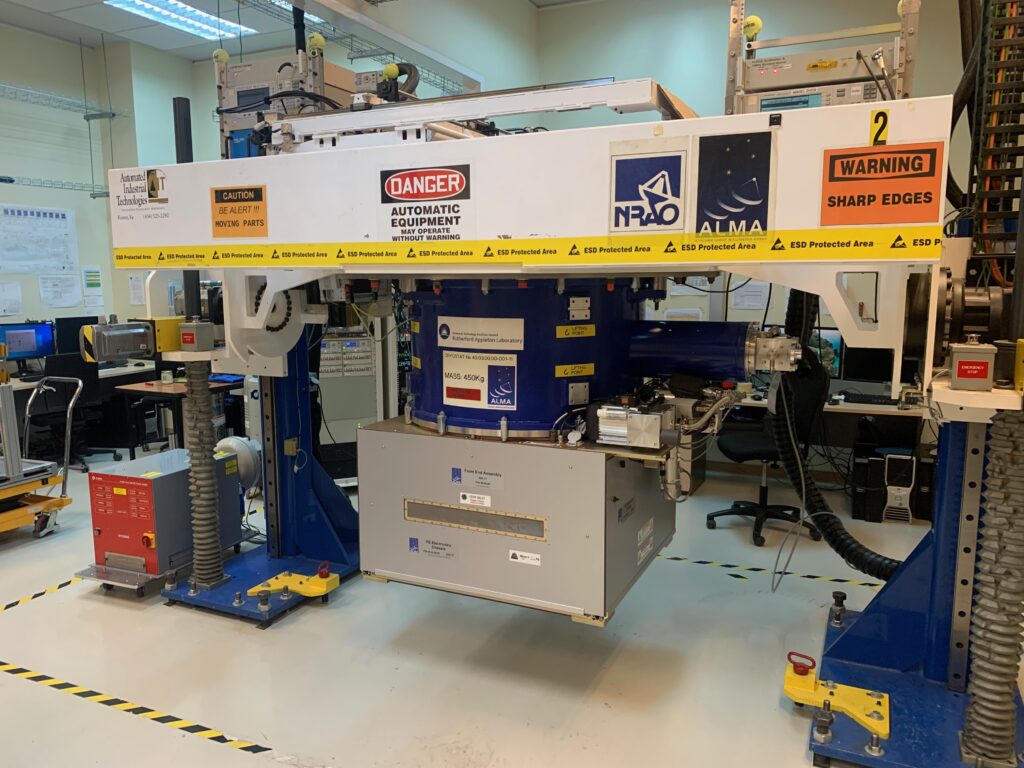 A gantry holding one of the lens casings taken out of an antenna for servicing. 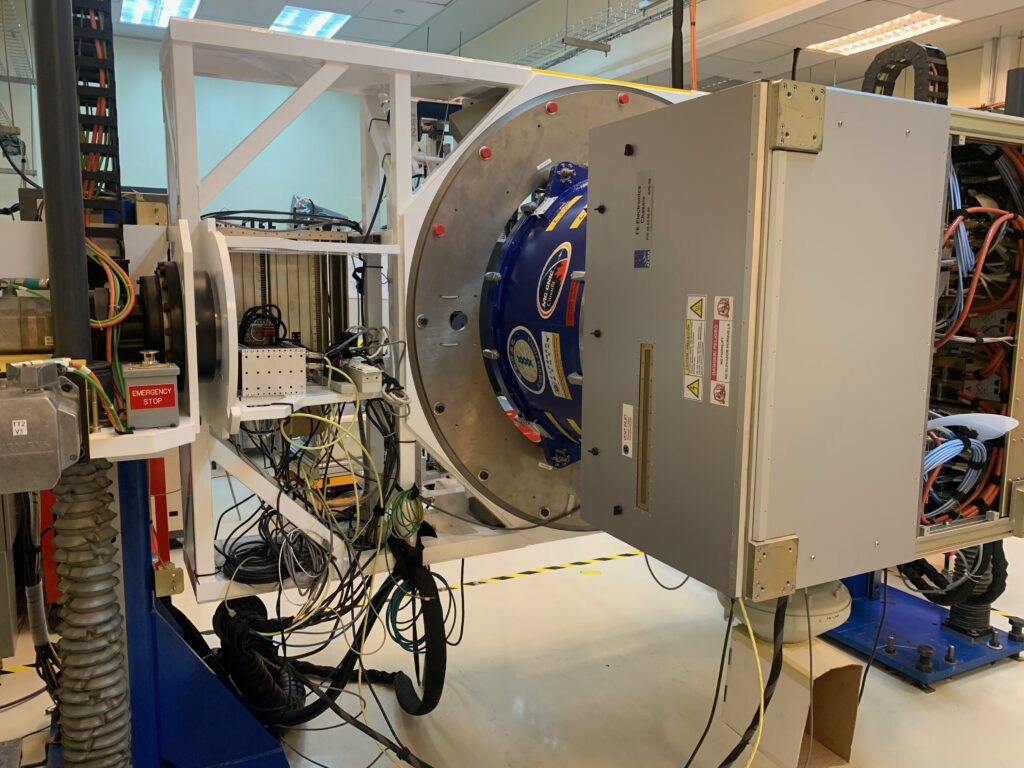 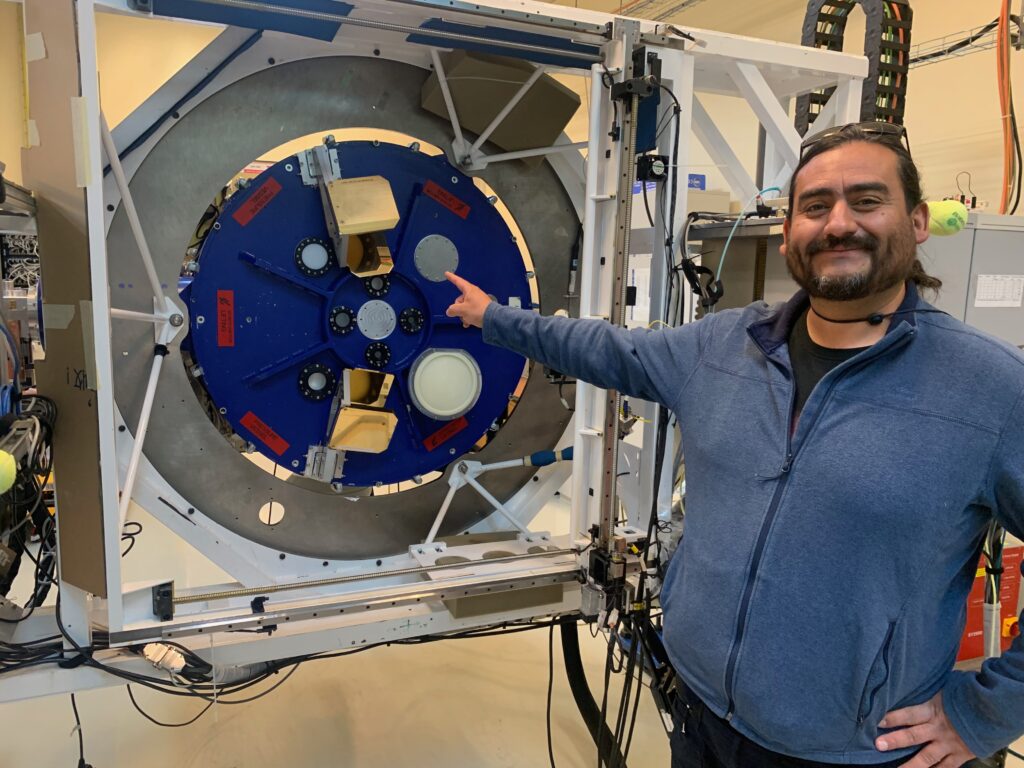 Danilo points to the clusters of multiple lens within an antenna’s ‘eye’.

The tallest building at the OSF is an aircraft hangar-like structure that is home to Otto and Lore, two custom built, essentially fork-lift truck prongs, each mounted on 28 wheels They travel up and down the mountain retrieving the antennae and transporting them down to OSF for maintenance, and back again. Each retrieval is a major, and very delicate operation. 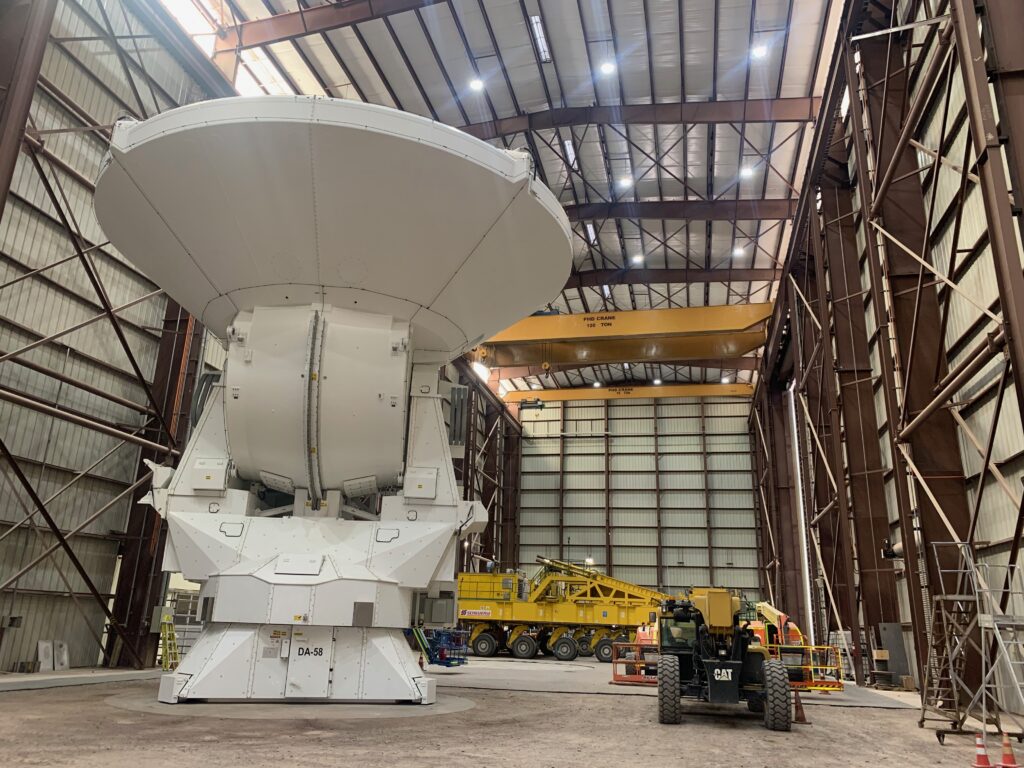 An antenna just arrived for maintenance, retrieved from 5,050m by Lore (behind). 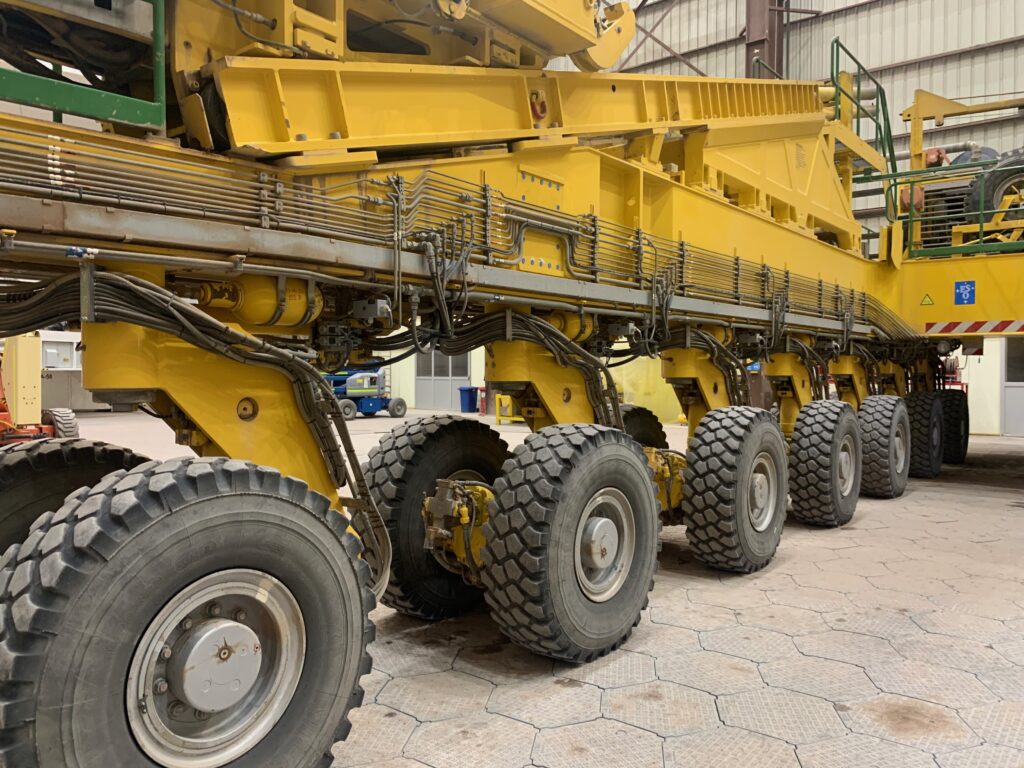 Lore’s multiple wheels give an ideas as to the scale of the fork-lift retrieval system.

Otto and Lore can be operated remotely but there is a cabin slung beneath the two lifting forks, as it were, where a driver may sit in a seat with a back hollowed out and into which must be inserted an oxygen cylinder for use on the journey up and down. Beside the driver is a co-pilot, operating a deadman’s emergency stop. The antennas, which weigh between 100 and 110 tons each, are plugged into a power supply on the transporters while being moved to maintain their cooling systems. When I visit, antenna DA-58, has just been brought in for maintenance. The unimaginative naming system is, I am told, about to change.

Where the 66 antennas operate, moving about on 192 paths capable of giving 10 different configurations of observation into space, is known as the Array Operations Site, or AOS. It is at 5,050 meters above sea level and contains the largest structure at that level on the planet. It is operated remotely from the lower, OSF level. Of Alma 250 or so staff, only technicians and maintenance support people operate at the AOS level. The remainder, who include the support staff, work at OSF level and 50 or so scientists, plus administrative staff, work out of Santiago, analysing the information gathered.

Data gathered by the antennas at OSF is collated at AOS before being sent to scientists based in Santiago.

The data assembled for member country research institutions is collated and given to them. They have exclusive rights to it for 12 months but after that, it’s available to anyone. Research requests are selected on a blind test analysis basis and, Danilo tells me, almost 90 per cent of requests are carries out — “making Alma the most successful observation [station] on earth”.

You can only be at the AOS site at 5,050m under very strict conditions of time and personal health because of the altitude and the dangers that poses. Paramedic Francisco Sanzana plugs me into a pulse monitor and asks me to lie back on the hospital trolly for my blood pressure test. You are only allowed up to the 5,050m AOS if your pressure reading is 140/90, or lower. The monitor strapped to my upper left arm tightens as the machine being to take my reading and stays taut until the machine beeps, and then relaxes.

Never mind, lie back and relax and we’ll try again in five minutes. But it’s no use: the next reading is 163/95 and the next again 169/105. So there’ll be no going up there for me. I knew I had slightly high blood pressure and take medication for it. But not enough.

“The altitude increases the blood pressure,” says Francisco. “The body can take two to three days to acclimatise to altitude.”

Well, I’d been knocking around at 3,160m for a few days and so therefore should have been acclimatised. Maybe I’ve just reached that stage in life where certain asks are simply beyond what my body can take.