An abandoned town, desecrated graves and an evil eye 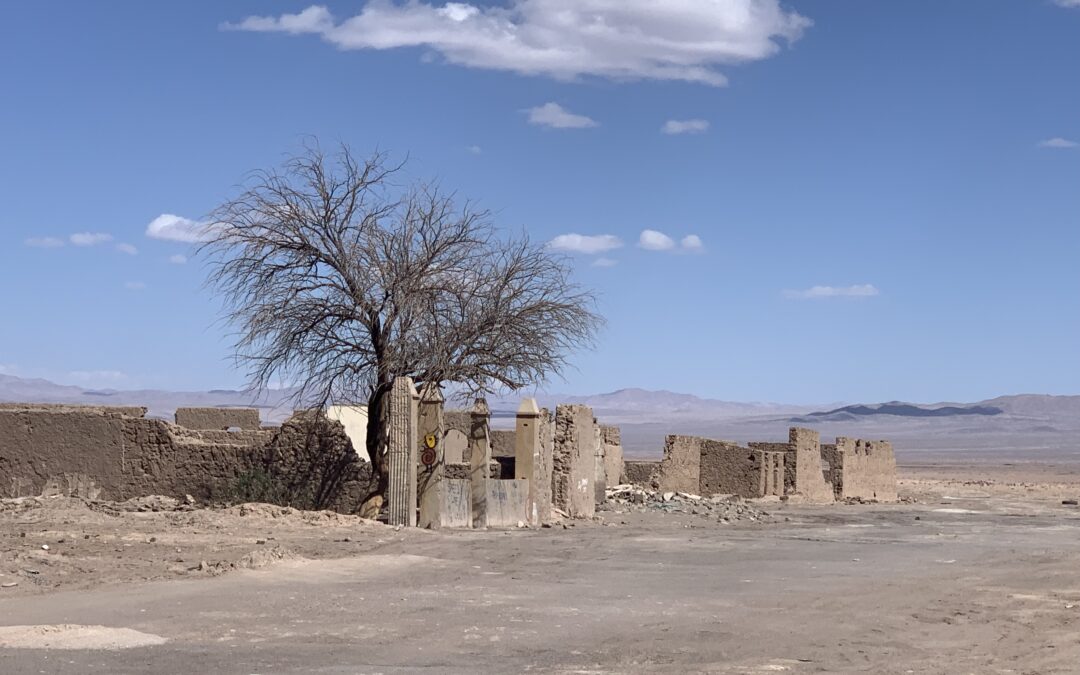 There was something really weird — a couple of things actually — on the road between Calama and Antofagasta between Christmas and the New Year. I travelled it because, after San Pedro de Atacama, I had to backtrack to Antofagasta to get new tyres fitted to my bike and a couple of other things seen to as well. Luckily, I had found another friend of the adventure biker, Luis De La Hoz, of Big Trail Shop moto service, who does for our kind, as well as for the local Carabineros de Chile, the national police force, and its motorcycle cops. If they can trust him with their lives and machines, I figure I can also. And so it proved…

But that road. Sierra Gorda is a kind of nothing sort of a place straddling the route between the two far larger, and more important cities, and which is dependent on travellers between them and on miners closer to hand. Some 30 kilometres south of Sierra Gorda there is what I first thought must have been an indigenous settlement, long abandoned. For about two or three kilometres on one side the road, there are hundreds of abandoned and ruined mud-brick buildings, a cluster that was very obviously once a town. They’re behind one of those green mesh fencings gardeners use to keep harsh winds off plants but such is the harshness of the Atacama, the mesh is mostly blown away. As a result, what is clearly visible are streets, a grid patters layout, what were at one time homes, many homes, and probably enterprises of one sort or another and something of a town square. It all just stands there now, beaten down daily in the Atacama sun, lashed by the winds but never worn away by rain because it never rains here.

A sign said keep out. So I went in. 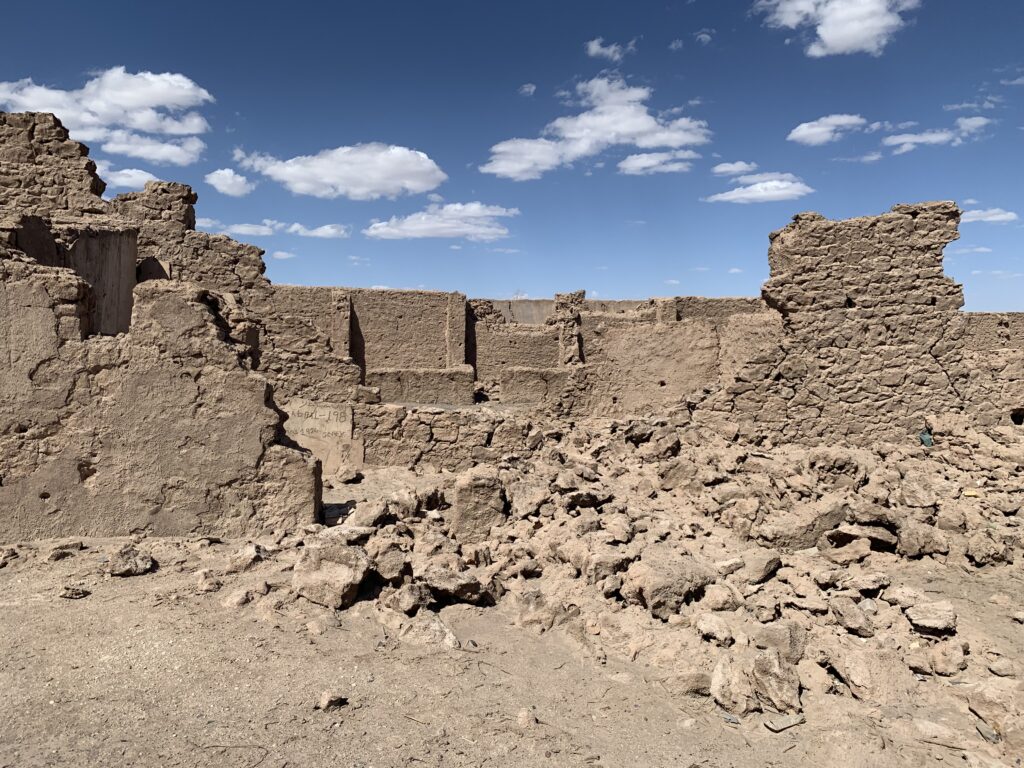 So too did Gustavo and Stephanie and their children, a boy of perhaps seven and a girl of maybe five. They were wandering about the old main square area (as I call it — perhaps it was something totally different). Gustavo and his son were kicking a ball between them. I parked the bike and did my own wandering. The place was, well, as described — an abandoned and slowly wasting away, former town. When I came back to the bike, I approached Gustavo and asked him about the place, and subsequently did a little research of my own.

The town was the Pampa Union and it appears, to me as least, to have a fairly short and unpleasant existence, the origins of which are not entirely clear, again to me at least. In the first decade of the 20th century, there were some people living at the northern end of the now ruined town, apparently digging saltpeter for mine owners who had little to no interest in their welfare. The miners too appear to have lived either in ignorance of their health or the feeling that they had no choice but to take risks to live. There were numerous accidents as well as the problems resulting from overexposure to the mineral, which can cause chronic blood pressure and respiratory problems. So community health was poor. 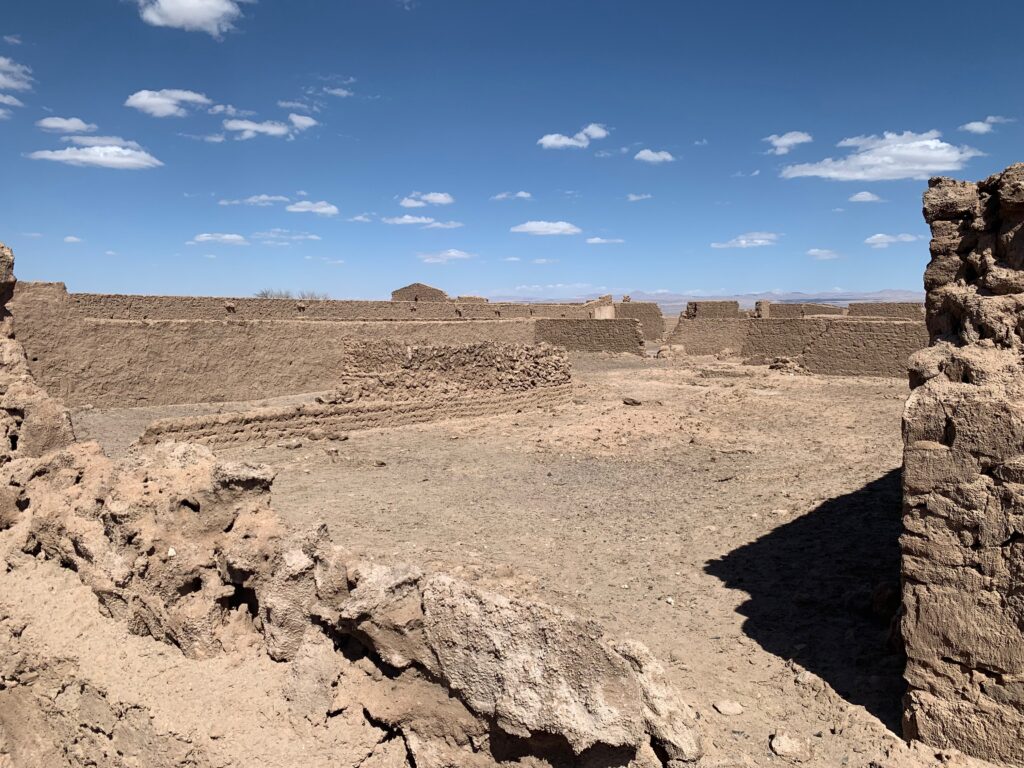 Slowly returning to sand, beaten by the desert sun.

Enter, in 1911, Lautaro Ponce Arellano, a 34-year old physician and Mason from Valparaiso, who decided to set up a sanatorium there, seemingly for altruistic reasons. This appears to have fostered the consolidation of the settlement, then known as the Pampa Blanca, and fuelled its growth along the Antofagasta/Calama railway line and it quickly became known as the Pampa Union. Numbers grew rapidly from around 2,000 to anything between 10,000 and 15,000, many of them Chinese, Croat, Palestinian, Syrian, Argentinian, Peruvian, Bolivian and, of course, Chilean. . . It was a case, it seems, a bit like Mark Knopfler’s “man on a track walking 30 miles with a sack on his back. . .” settling down and founding a town. Came the churches, came the schools, came the lawyers, came the rules, came the trucks with their load…”And the dirty old track that was the Telegraph Road“.

‘cept in the case of Pampa Union, there were few enough laws and those that existed were enunciated by the Nitrates Office, ie the people who bought the saltpeter and hence controlled the local economy. An “administrator”, appointed by the Nitrates Office, ruled unaccountable and in a manner that history seems to agree promoted debauchery and social vices. No money circulated in what was a barter economy. You got what groceries you needed, and what beer or wine you wanted, by exchanging tokens earned at the nitrate mine. The streets were mostly mud surfaced but the main throughfare, Sotomayor, onto which the train station fronted, ran six or seven blocks and was floored in timber. There was a theater that could fit 200 and a boxing stadium for 250, a printing house and a civil registry which may, or may not, have been related to the fact that brothels, numerous of which existed around the edges of the town, also thrived. They never got around to building that church but those who wanted to worship did so in a room in the school. Whatever about Dr Arellano’s altruistic, Masonic-based motives, he wasn’t beyond putting himself around. Married twice, he had five children with his first wife, and another son resulting from an affair with a woman known as “pampina Mima”, about whom my limited research suggests nothing but the name itself suggests something. 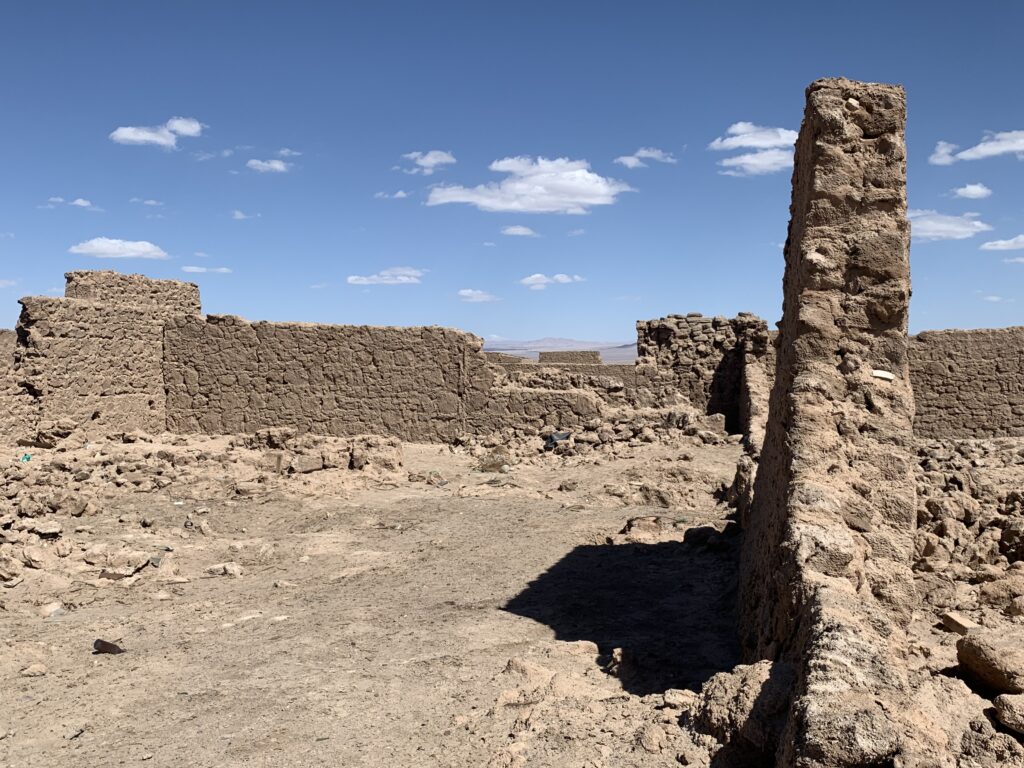 For all sorts of reasons not difficult to imagine, the place became notorious and was finally “disestablished” by the regional authorities in 1954. Dr Arellano died aged 91 in 1967.

“There’s a cemetery over there,” said Gustavo pointing. There is indeed — an unkempt, desert wind blasted collection of many graves, some half buried now by wind-blown sand. It could be a set from a Spaghetti Western. Some of the plots are very simple graves, many containing the remains of children, apparently more susceptible to nitrate poisoning, while other, grander memorials have been burst open by desecrated and their mummified corpses remain visible and open to the elements.

I chat a bit more with Gustavo and give his boy some stickers. Gustavo rushed to his car and returns with a lump of rock: “from my mine”, he says, pointing out streaks of malachite and purple amethyst-stained quartz. A present; we shake hand and wave out goodbyes.

Further along the road towards Sierra Gorda, the presence of a huge Polish-controlled open cast copper mine, south and west of the town, is evident by huge piles of mine tailings, the debris left over once the mineral-bearing lode has been extracted from the rock. Passing on a day when the wind is blowing dust clouds, and little tornado eddies across the landscape before they vanish as suddenly as they appeared, something catches my eye. 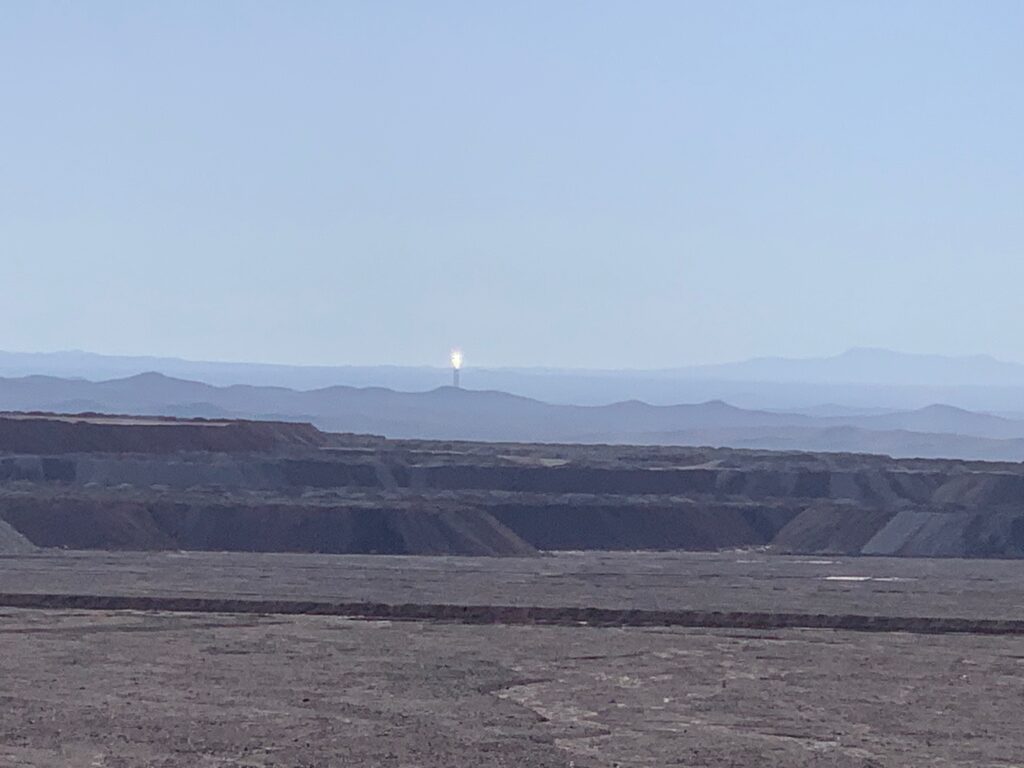 The unexplained eye casting over a desolate landscape of slag heaps and abandoned graves . . .

Peering between several huge, perhaps hundred feet tall, tailing mounds, there is a strange, almost sinister, beacon. It is perhaps five kilometers back from the main road at any one point but must be hundreds of feet high. It looks in one sense like a lighthouse except there is no flashing, no pulse or rhythm to the light being emitted that would suggest it was a signal — just a constant, slightly throbbing beam of pure white light atop what looks like a huge column. Like the eyes of a portrait, as the road bends past the tailings, over a stretch of maybe five kilometers, the beam seems to follow one’s own gaze. Its creepy.

I asked in Sierra Gorda and in Calama about the beam but, weirdly, no one knew anything about it. It may be nothing to do with the open cast mine; its light appears from a distance to be entirely unfocused in terms of what it might be projected to illuminate. But it reminds of nothing less than the Eye of Sauron, casting an evil eye over a wasteland filled with slag heaps and things abandoned.