An unpaved road and jawdropping vistas 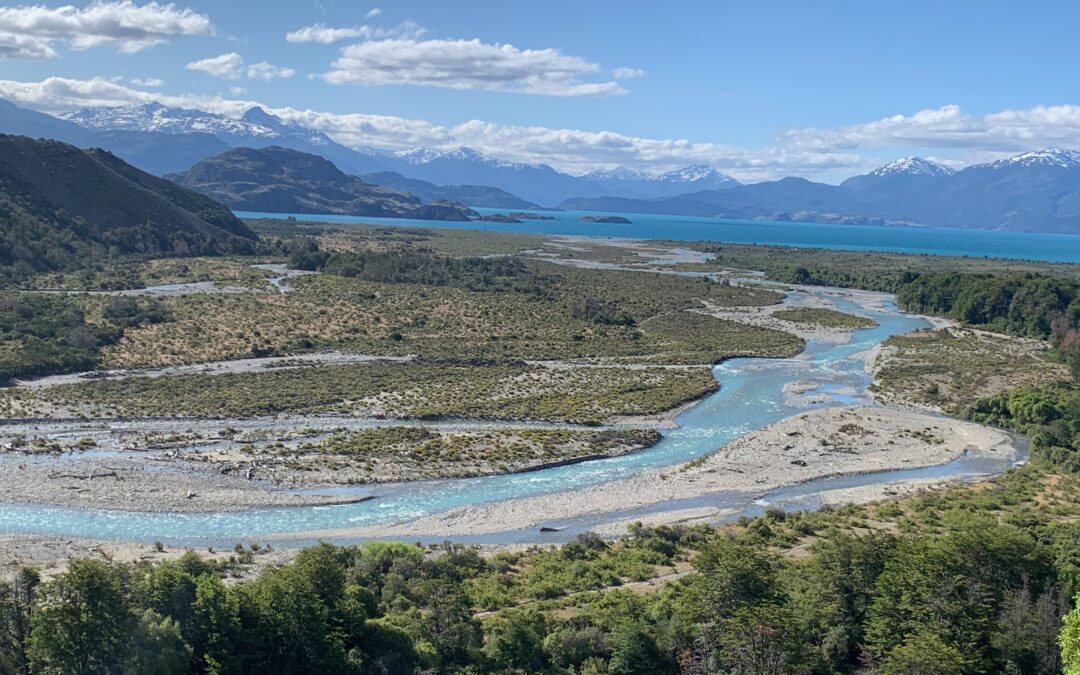 A day that began with such little promise ended in triumph. The road that was worried over, was in the event traveled and traveled well, thanks to the urging of an Australian geologist. The reward was great.

I spend the night in a truck stop place best not mentioned by name. The mangy dogs that hung about it were better presented than the place itself. Suffice to say that it was not clean. Had I entered the shower, I would have emerged less clean. The toilet was to be avoided entirely. I stayed there because, having thought about a particular unpaved road west, out of Argentina and into the Chilean Andes, and tentatively set out for it at about 4pm, the wind was so ferocious that I thought the better of it and reversed.

The problem then was where to stay for the night? Wild camping was out of the question. I was on the arid and wind bashed Patagonian steppe of Argentina’s Santa Cruz province and even if I could have erected my tent (and I could have), I would not have been able to secure it to the ground — the pegs would have lifted from the gritty sand in seconds.

Truck stop it had to be. I slept fully clothed, lying rigid on top of an alleged bed and was gone by 7am. The gravel road rejected the night before beckoned again but, after perhaps two kilometres into a ferocious headwind, I admitted defeat again, turned around and resumed the (longer) tarmac route north to another border crossing. Taking Argentina’s famed Ruta40, I eventually turned west to the frontier crossing back into Chile at Los Antigous.

The Chilean town on the other side, Chile Chico, was a pretty lakeside affair and noticeably more prosperous than many similar places on the Argentine side, with the exception of El Calafate. I can’t help wondering what role stiffing the international banks has played in Argentina’s current down-at-heel feel.

There is an air of decay to much of the country. There are too many cars on the roads that are old, bashed and dusty. Homes look dishevelled; people appear poorer than they should be. Public spaces are invariably shabby and unkempt. Chile, on the other hand, looks and feel different. The place has a spring in its step.

Chile Chico sits on the southern shore of a lake that itself straddles the Chile/Argentine border. On the Argentine side of the watery divide, the lake is called Lago Buenos Aires. On the Chilean side it is Lago General Carrera, named in honour of one of the country’s founding fathers. There was a small ferry port and I wondered whether I might be able to circumvent some 200 kms of gravel road by crossing the lake on it?

In the restaurant beside the slipway, the staff said the ferry had left that morning and they didn’t know when there’d be another. A man eating lunch — the Auzzie geologist — piped up. There’d probably be another on Thursday morning, he said. It was now Tuesday and I didn’t fancy kicking my heels for two days.

“If I was you,” said the geologist (he worked at a nearby silver mine), “I’d take the gravel road around the lake. It’s really something.”

I thought I’d give it a go and, my God, what a road. This secondary, unpaved road, the R265 from Chile Chico to El Maitén, presents the traveller with vistas of jaw dropping magnificence. The sky in clear blue, the lake a corresponding azure. The Andean peaks on the far side are dark, angular and snow-capped. On my side of the lake, the land is poor scrubland but beautiful looking. 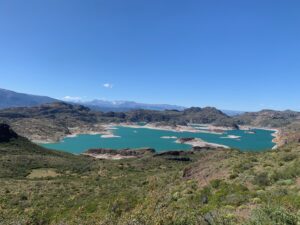 Frequently wide enough for just one vehicle, the road at times hugs the side of the mountain, bare sandstone escarpments towering above me, matching in scale a sheer drop below. The road rises and falls, twists and turns and despite it being gravel, the grit is compacted and easy to ride.

Advice from a pal and a bit of “swallow hard and get stuck in” self-belief helped. I had done two off-road riding courses, one in Wales, one in Scotland, and was familiar with the basics. What I lacked was the confidence to put lessons learned into practice. When riding over rough ground and the bike is slewing this way and that, the best thing to do is stand fully upright on the footrests, known as pegs.

It’s counterintuitive, I know, but standing upright and forcing your upper body weight forward, over the fuel tank and the handlebars, actually increases your control over the bike. Somehow, instead of twitching your backside sitting down, haplessly trying to control the machine as it slithers terrifyingly on the slippery gravel, standing upright and chanelling control through your knees and ankles makes really puts you in charge and the bike responds.

One rounds a bend and another vista appears, prompting another stop . . . to stare in the stillness of the moment at the beauty that time and nature has conjured. And it’s just there — free and not asking for anything, other than to be enjoyed and respected. The road seems never to end — and very soon, one is hoping it does not. The stretch I did was a bit over 100 kms and, for my money, it has to be one of the great drives anywhere. 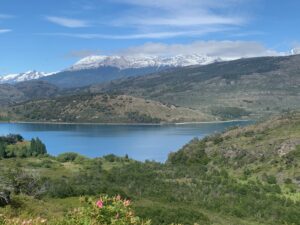 After I come to Puerto Guadal, I decide to settle down for the night. A pretty little town of some 700 inhabitants, some make a living from sheep farming, others from tourism. It is at the heart of Chile’s Aysén region and right by the Carretera Austral, the 1,200 kilometre Ruta7 road of growing renown that runs between Villa O’Higgins and Puerto Montt.

I pull up outside Hostal Janito, a wooden and red tin roofed house, typical of the town. A man inside indicated that the owner isn’t there but will be back in about an hour. I establish that he is at the funeral I just saw, proceeding at a walking pace to the local graveyard.

Next door is a small supermarket where I get pasta and wine. Coming out, people are examining my bike, always a source of interest and a conversation starter. A minibus has also pulled up.

“You want room,” asks Lautaro, the driver and apparently a tour guide. I say yes and a few minutes later, he announces with great authority that he has arranged for me to take Room 2 in the hostel and that I must install my belongings there and settle in.

That night, much wine disappears along with pasta and tomatoes and onions and garlic, lots of garlic. I feel lucky to be alive, a master of the gravel roads and I sleep so well.