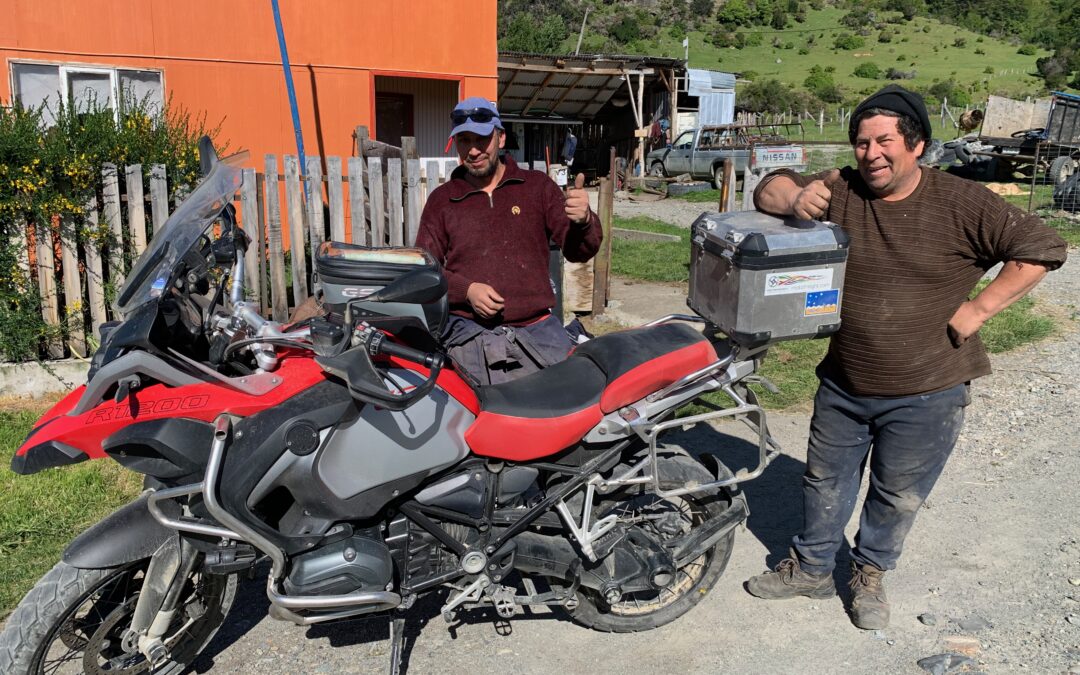 The prospect of 200 or so kms to Coihaique didn’t faze me a jot. And it was almost all going to be on an unpaved part of the Carretera Austral, Chile’s southern-most highway before the South Patagonia Ice Field severs the country from its Magallanes y Antárctica region below.

I set off in good cheer and ride the gravel like a pro before dropping into Bahia Murta. I mean, how could I not? 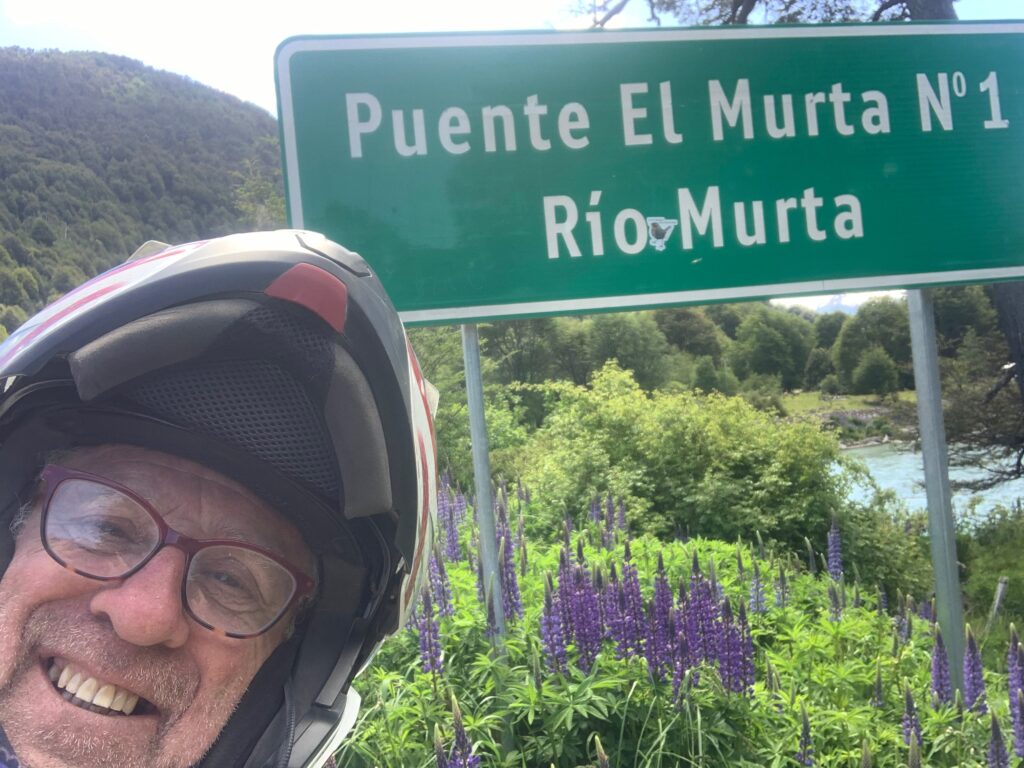 To be honest, after a cursory ride through, the place didn’t have a huge amount to recommend it and so I sailed on — for maybe eight or 10 kms.

Until I noticed the warning light.

And then the rear wheel sensor told me that my rear tyre pressure was down to 16 pounds per square inch (psi) when it should, with the load I’m carrying, be around 42psi. Within minutes, it was down to 14. Then 10 — 9, 8, and 6, and I was in the middle of nowhere.

I had an emergency kit to plug a leak temporarily but the first instinct was to press on — the “something will come up” approach — until common sense dictated that I return to my namesake, fairly forgettable village and try to deal with the problem there, where at least there was food and shelter, if I was really stuck. I didn’t fancy camping in the wild and having to deal with such a problem.

I limped into the village with the rear tyre pressure down to four and then two — that is more or less totally deflated and running on the rubber. At the edge of the village, I asked a passer-by whether there was an “hombre moto” around and made a hissing noise as I pointed to by deflated rear, as it were.

I was directed first left, then first right and. . . well, somewhere up there.

As I searched for the vulcanisa man, a car with a couple in it approached. They too were looking for the tyre man, though without visually obvious need. They were French tourists and urged me to stay put while they searched.

Within minutes, we were all standing on an stony incline, outside a ramshackle yard, with a shed and an awning, under which was one of those machines that takes tyres off wheel rims. So at least we were at the right place. A few phone calls with a helpful neighbour and soon a slightly the worse for wear Nissan pick-up truck with a barking dog in the back appears and out hops a man. The dog stays put but continues barking

A translation with the man would go something like this: what’s up? he asks me in Spanish. I explain, as best I can in ‘Spenglish’. Hmmmmm, me no moto, comes the reply but, and this is the worrying bit, he indicates, Irish style, sure we’ll give it a go! 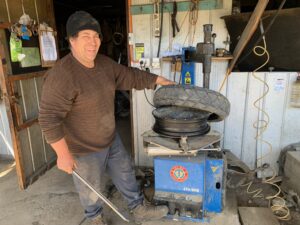 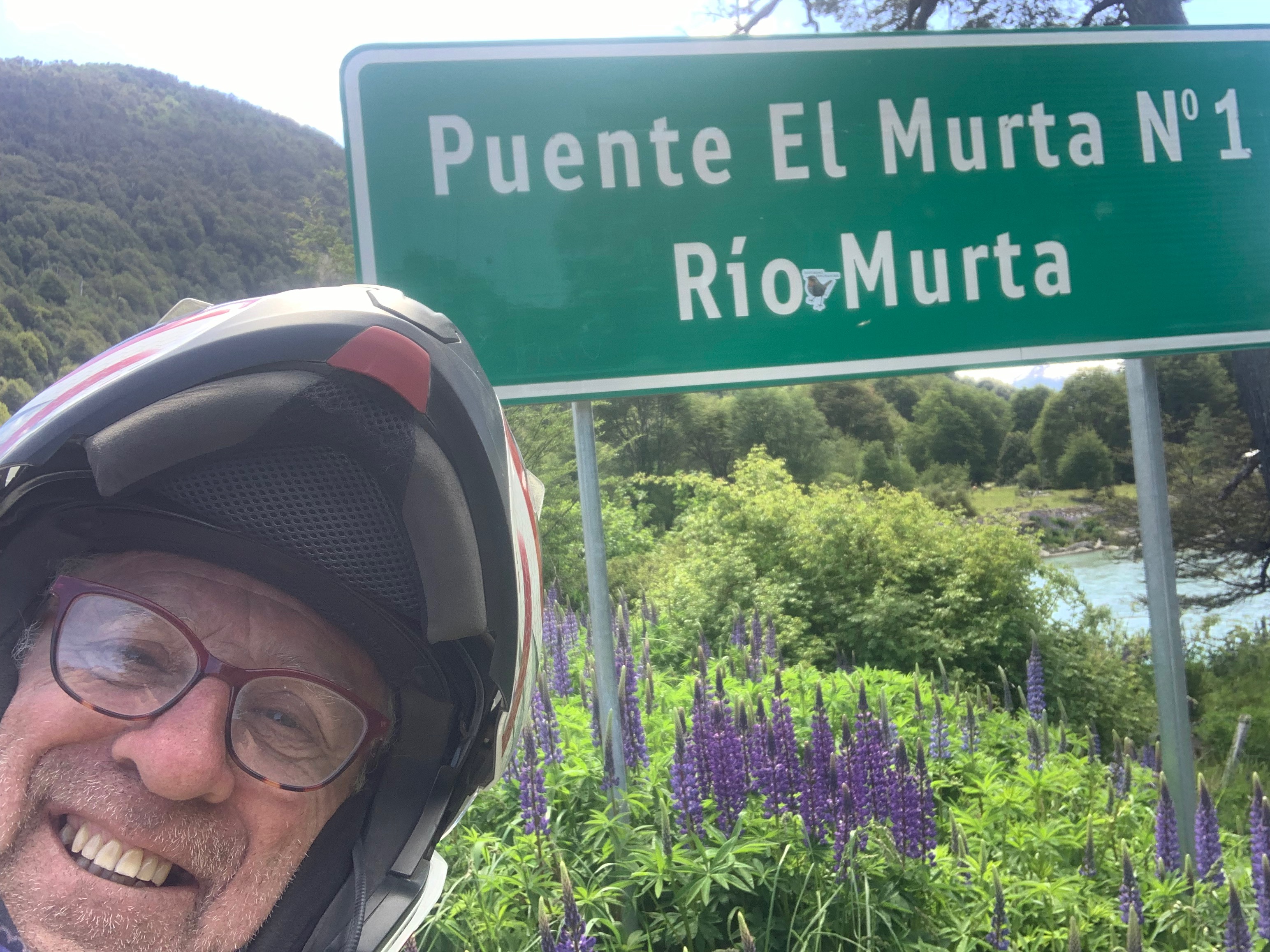 And so Andres, sets about trying to work out how to take the wheel off the motorbike — his first. He is initially stumped until his brother Enrique appears. “Enrique comprender el moto,” I ask?

No, they both say. I rather feebly suggest the emergency plugging, achievable without removing the wheel, but they’re having none of that half measure stuff.

And lo and behold, after a while, they work how to do it (and it turns out to be very simple), while Andres’ son, Marrin (11), deploys his full arsenal of school English on me — where from? how old? where going? how long? how old moto? you wife? you son?

In no time at all once Andres and Enrique get the wheel off, detach the tyre, find the tiny hole and seal it with a mushroom-shaped patch. It’s one where, from inside the tyre, you push the mushroom patch stem through the hole, and the mushroom cap, as it were, is glued to the inside of the tyre, on top of the hole, with, ultimately, the air pressure in the wheel almost “welding” it to the tyre.

The lads are as delighted as I am with their success. There is much shaking of hands and embracing. I give them $100 — a small fortune, yes, but I am so grateful, the more so too for their cheerful “have a go” attitude. I find a cabaña for the night and bed down.

Next morning, about five kilometres along the road, the warning light flashes again, generating the thought that, like an episode of the Twilight Zone, I am doomed never to escape from Puerto Murta. Back as Andres’ yard, he checks and assures me that all is well — there is no leak, new or old, and that the alarm is probably just a false reading by the pressure sensor, disturbed during the puncture repairing.

My second puncture (and two further tumbles) comes later. . . But for now, I’m on the road again, heading for Coihaique, which I can pronounce only having been there — it is Koi, as in carp; hee and then yakki — but not before the Carretera Austral bring me past the extraordinary Cerro Castillo mountain range. It gets its name from the castle-like spikes on its 2,675m summit — a bit like a punk hairdo — which are mostly hidden by cloud as I pass. 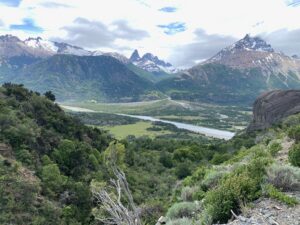 After the night in Coihaique (and a substantial Argentine-style fillet steak and Carménère wine), the following day brings a valley floor carpeted in mauve-coloured wild lupins. The Rio Simpson valley is a flat-bottomed gorge flanked, on one side by sheer escarpments of what looks like sandstone and, on the other, by basalt mountains blanketed by pine trees, a sort of fir coat. 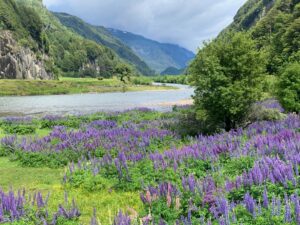 The valley is (yet another) national park, with hiking trails aplenty and a modest-sized but information-filled visitor center. The place is empty when I enter but I am met by José Miguel Bopp, who becomes fantastically enthusiastic when I start asking about the valley and everything in it. 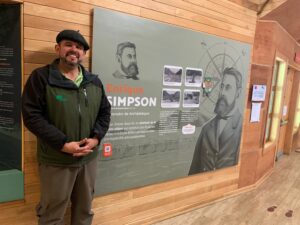 Its named after a hydrographer, Enrique Simpson, who, as a captain in the Chilean Navy (which had, and has, very close ties with Britain’s Royal Navy) surveyed the valley around 1872.

“He was later almirante,” explained José, “He sailed his ship to Chacabuco and explored this era over four visits.”

The visitor center is a treasure trove of information, invitingly displayed, explaining everything about the plants and animals living in the valley, the geology and the forces of nature that gives it its appearance.

Nearby is the Cascada La Virgen, a waterfall spilling down the valley side in a sheer plunge, not unlike Glencar waterfall in Sligo — only here, its just one of many similar waterfalls, all of them powerful and dramatic spectacles. But this Cascada has been colonised by religion. A shrine has been set up, a large statue of the Virgin has been set into a scalloped out hollow in the escarpment, and a small chapel built. 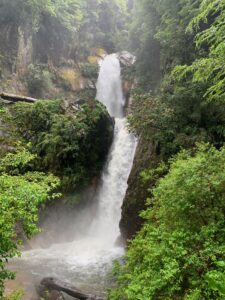 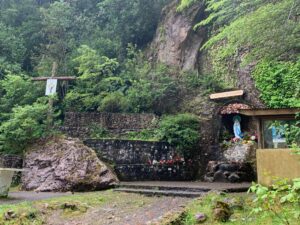 Perhaps this brings solace to those of faith, who will have made this and who visit to pray and remember. But I can’t help feeling that nature, the actual creator of this place, and so much else that I am seeing and which thrills me, is the true god.

And that’s enough for me.