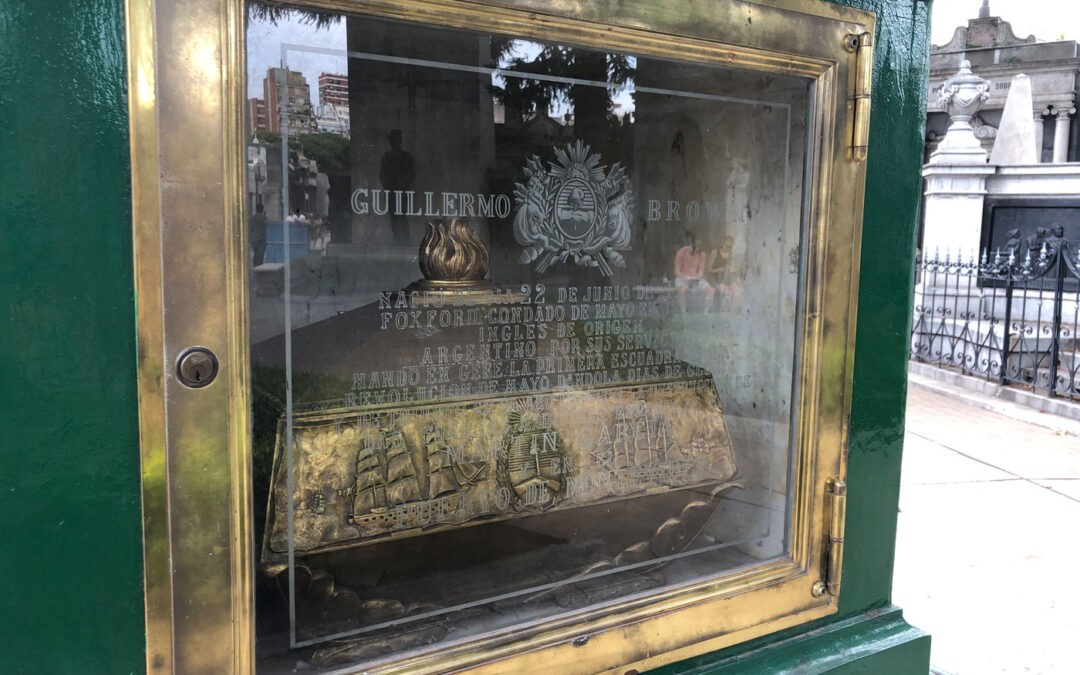 La Ricoleta Cemetery presents itself to the world with a sense of enormous self-importance. Behind the neo-classical portico entrance, with its four Doric columns, there are stories upon stories that together tell the story of Argentina itself.

Spread across 14 acres and hemmed in on all sides by the sprawl of Buenos Aires, La Ricoleta is home to almost 4,700 vaults with God known how many bodies in side them. The tombs are in a varying state of repair – some sport beautifully carved Portland stone or marble sculptures of angles and the like, lofty symbols of victory over death. Some have copper or brass plates and door frames fashioned in the delightful curves of art nouveau. These tombs are well tended, either by loving descendants or the cemetery authorities, conscious of the historic or social importance of the structure and occupants.

But others are wrecks, filthy heaps of crumbling stucco and brick, rusting iron works and collapsed floors through which one may see the musty, cobweb encased dark wooden caskets with their heavy old brass handles – family mausolea abandoned by relatives who no longer care or have the financial wherewithal to fund their upkeep.

La Ricoleta represents Argentina in so many ways.

Through the entrance, an avenue leads to a central point from which radiate, in eight different directions, narrower paths, all of them lined with closely packed vaults, all contained within a great square. Beyond this square, the rows take a more conventional grid pattern but the packing of the vaults remains the same: so many are squeezed in, there isn’t an inch to spare.

Within the vaults lie the remains of Argentina’s great, good and not so good, the people who in their different ways created the country. There are presidents and generals, soldiers and sailors, demagogues and sports people, musicians and actors, writers and intellectuals.

At the point from which the paths radiate from the central axis, design-wise the single most important place in the cemetery, a green-coloured monument marks the grave of Almirante Guillermo Brown, the former William Brown from Foxford in Co Mayo. Born in 1777, he went to sea, fought in the Napoleonic Wars and subsequently married an English woman, Elizabeth Chitty from Kent, and then decamped to Montevideo in Uruguay to become a merchant.

All might have ended thus had it not been for Spanish ships destroying his schooner, drawing Brown into Argentina’s war of independence, so much so that he founded the country’s navy.

He lived until 1857, dying aged 79, but not before a photographer capture his likeness. Posing in dress naval uniform, sword on his waistband and his admiral’s bicorn in his right hand, his face has the look of a man from rural Mayo.

Like Bernardo O’Higgins, another man of Irish lineage revered for his role in Chile’s war of independence from Spain, Brown is memorialised everywhere in his adopted country. His grave in La Ricoleta is a green column sprouting out of a green plinth cube, measuring about six foot by six foot and housing, behind a glass window on one side, a small polished brass casket, presumably containing the admiral’s remains.

Etched onto the glass is an explanation of the occupant. “Nacio el dia 22 de Junio de 1777 en Foxford condado de Mayo en Irlanda. Ingles de origin. Argentino por sus service. . .” it says, which translates as, more or less, English by origin. In the service of Argentina.

Diagonally opposite Admiral Brown at the same positionally significant central location, is the grave of another Irishman, Father Anthony Fahy, a 19th century Dominican priest from Loughrea who is remembered, well, for several reasons.

Fr Fahy’s monument is a typically, over the top Victorian-style memorial. On three sides, stone carved angels are enveloped by their own wings, one holding a gold mosaic shield with the priest’s name on it. There is also a bust of the man himself. On the fourth side, there is a scene carved in stone, a faux, island of saints and scholars representation — a carving of a harp, a lancet window and a round tower.

Behind this is an explanatory tablet. The monument has been erected to Fr Fahy it says “by his faithful people as a tribute to his priestly virtues of sanctity and charity and in the great care he took in their spiritual and temporal welfare”.

This did not extend, however, to Camilla O’Gorman.

Camilla was the youngest daughter of a prosperous Buenos Aires family with Irish, French and Spanish lineage. While still in her late teens, she met Father Uladislao Gutierrez, a 22-year old parish priest who visited the family regularly.

They fell in love and began an affair and eventually eloped to Goya, a small city about 760 kms north of Buenos Aires. Polite Argentine society (not to mention the all-powerful Catholic church) was scandalised and eventually the couple, living under a false name in Goya, were recognised by another Irish priest, a Fr Michael Gannon, and were betrayed.

By this stage in his pastoral career, Fr Fahy was a force to be reckoned with in the Argentine church and political establishment. Appointed by the Archbishop of Dublin to the Irish chaplaincy in Buenos Aires, he was a supporter of the repressive government of Juan Manuel de Rosas, an army general-cum-politician who vowed to “restore the laws” (a common politico-military trait in these parts, it seems).

Fahy and the church “demanded an exemplary punishment of the wayward daughter that was also giving the industrious and well-regarded [Irish] community a bad name”, according to The Scarlet Trinity, a study of Camilla by Maria Teresa Julianello of the Society for Irish Latin America Studies and published in 2000 by the UCD Centre for Migration Studies.

The couple were eventually brought to prison. Fr Fahy and the church approved what the government did next.

On the morning of August 17th 1848, a priest visited Camilla in her cell to baptise her unborn child. She was eight months pregnant. Because the baby was not yet of this world, the baptismal procedure consisted of Camilla having to drink the holy water that would otherwise have been sprinkled on the new born child at the baptismal font, and having consecrated ashes smeared on her own forehead.

The next morning, the young woman and Uladislao, the father of her child, were taken blindfolded to the prison courtyard, tied to chairs and shot dead. All three were placed in the one coffin and buried together. Camilla was just 20 years old, Uladislao was 24.

This story is not told on the Ricoleta memorial to Fr Fahy’s charity. Fr Fahy is remembered for other things, including the good deed of raising money, £411, for famine relief in Ireland.

I strike up a conversation with another visitor to the cemetery, an unusual young women named Rhandi. She’s about 35, at a guess. She’s attractive – bouncy, wild even, outgoing and demonstrative in an American sort of way. She’s from Canada, it transpires, and is Muslim, the child of refugees from Mneen, a small town-cum-suburb north of Damascus.

We look – inevitably — at the grave of Eva Peron, María Eva Duarte de Perón, who is interred in the well-kept vault of the Duarte family, not with her husband, the late Juan Perón, whose remains are in the Museo Quinta 17 de Octubre, minus his hands, cut off by a chainsaw in 1987 in a bizarre and unsuccessful scam to extract US$8 million from the Argentine government.

Eva (Evita) remains a huge presence in Argentina: a huge neon representation of her face adorns the façade of a large block in the centre of Buenos Aires and her tomb, bedecked with fresh flowers is a draw, to locals and tourists alike

It takes a while, but eventually I find the last grave I really want to see: the final resting place of another Argentine-Irishwoman of note – Celia de la Serna y Llosa, daughter of Ernesto Guevara Lynch and mother of Che. She is in section 17 and is described in the cemetery records a “militant”, which she certainly was.

Educated by the nuns, she thought of becoming one but instead fell under the influence of her sister and opted for atheism. “From her youth,” says the cemetery’s written guide, “Celia demonstrated a great strength of character, deep convictions and a contempt accentuated by the rules and precepts that prevailed at the time.”

In later lifer, she became something of a bohemian and was known even to smoke. Her son was also fond of the occasional cigar…

Sadly, the family tomb is now a wreck and indeed does not even sport the Guevara name. It may be that another family took it over, as often happens when an earlier family’s interest or finances wane, and the newer family has also lost interest or money sufficient for maintenance.

Either way, the iron lancet gate to the mausoleum is rusted and broken. Inside, the tiny chapel and altar is a filthy mess, a forlorn representation of Christ crucifix remains mounted on back wall of the tiny chapel above the vault.

The floor is smashed and below may be seen three wooden coffins, stacked one on the other. It is not at all clear if the feisty socially-conscious mother of Che is one of the occupants but it’s clear that with her, the apple didn’t fall far.

Next day, I sample some Malbec – a 2019 vintage, bottled in memory of you know who. La Poderosa, says the label, the nickname of the bike in that famous skite through the Andes and up Chile. In Che’s case, his bohemian phase clearly preceded his revolutionary one.