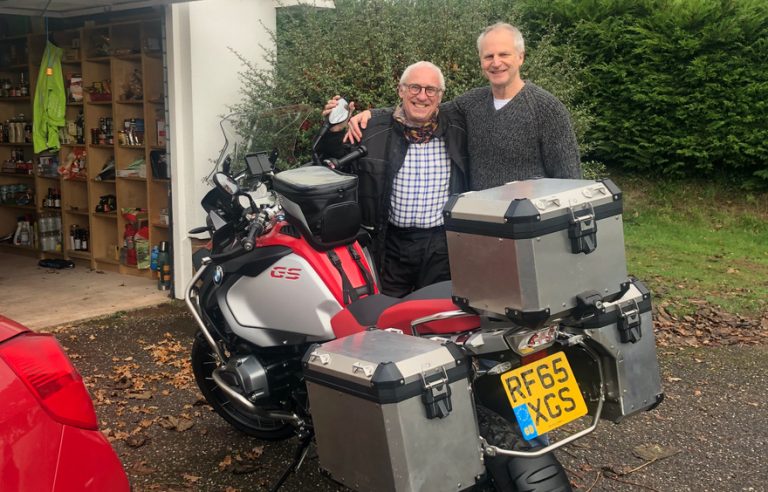 Stephen Hingston looks wistfully at his gleaming R1200 GS Adventure, one eye on the pristine machine now sitting on his driveway in Devon, and the other on me – the bike’s new owner.

I am about to ride off on his beloved four-year old GSA, never to be seen again by him, when he remarks: “I do have a heavy heart seeing it go.” And then he adds – without a shred of credibility to what he says – “I could do with the space in the garage.”

Never have straws been more desperately grasped at. . .

I first set eyes on the bike, a red livery, top-of-the-range TE model of BMW’s new liquid cooled Adventure series, while scrolling through Facebook in October 2019. For my money, the GSA is simply the machine for major adventure biking and doing Tierra del Fuego to Alaska is fairly major. . .

My existing machine, an ’07 Adventure with 96,000 kms on the clock that did sterling work for me (and for the Irish Times), is simply too old to be used for what I now have in mind. Initially when pondering where to acquire a new bike, I dipped into BMW’s UK online approved used bikes for sale webpage. It’s a tool for all BMW Motorrad dealers in Britain and is packed full of bikes on offer by the company’s dealership network.

Why search the UK? Because, essentially, the British, or rather the English, tend to look after their machines better than us. It’s one of their more pleasant characteristics in an age when it is so easy to think otherwise of them. . . The caricature image of the English fellow out in front of his house every Saturday morning washing his car, rubbing polish all over it, or fascinating himself (and possibly boring others rigid) as to the merits of the ’67 Z4 or whatever-it-is over the ’92 GT-thingumagig, is, like all stereotypes, based completely on reality.

They love and care for their bikes and cars to a degree that seems faintly daft to most of the rest of us but then, when searching for a second hand machine, it’s a great place to look.

I liked the look of the bike I saws on Facebook and its full service record history. A little research suggested Stephen was genuine (you can’t hide from Google, Google Earth and Linkedin) and so we haggled a bit by agreed a price: £11,000 sterling or €13,417.

I banged over the money and crossed my fingers. I need not have worried – Stephen proved to be trustworthy and as honest as the day is long.

A nuclear engineer working on various British government projects and recently moved from Hampshire to Devon with his wife Cathy in preparation for retirement, Stephen bought his beloved GSA in May 2017. It was registered first in November 2015 and, by the time I got my paws on it, had clocked up a mere 9,000 miles. Nothing! An average of 2,300 each year. Mileage I’d clock up every two or three months during my working years. Stephen’s bike had hardly been given a decent run.

In July 2017, he and a pal, a former Royal Engineers biker, broke out and rode to Europe.

“We went through the [Channel] Tunnel to Waterloo [in Belgium] to the battle site, then down through the Ardennes into Luxembourg and to the Mosel valley and back home,” he told me when we met. “That’s the only big trip I’ve done on it.”

Inside a red document box with a clip shut door on it, Stephen had kept every scrap of paper, from a worthless receipt for a side stand expansion plate (essential for dismounting on weak, spongy surfaces) to service papers and ownership documentation. This was a bike that had been well looked after, if not exactly ridden around the world!

“I’m just not using it,” Stephen said as we sat at his dining table going through everything, sipping coffee and sharing gloom over Brexit.

Cathy padded about the house, a lovely detached home surrounded by fields and trees not far from Tiverton, but left us largely alone to get on with the sad/happy handover. The couple have serious plans for the garden and hope to acquire an adjoining small woodland too. “There’s a sense of  [us] belonging down here,” says Stephen who commutes weekly to work near Reading.

In the garage, the bike sits on its centre stand, gleaming like a new pin, the merest hint of a little dust on the tank. There’s a tank bag, and inside the two aluminium panniers, waterproof liner bags as well.

The battery is connected to a charger and Stephen shows me how to use the SatNav, which I also agreed to buy, along with a brand new, barely used BMW helmet that fits me perfectly.

Once on the driveway, there’s time for a few snaps and then Stephen escorts me helpfully in his car to the M5 and I’m away!

“I might buy an old Triumph Tiger and do a few runs with my chums,” he said earlier, seeking to console his heavy heart at the imminent prospect of saying goodbye to his GS Adventure.

I hope you do Stephen. Thank you for your kindness, your generosity and honesty. But most of all, thanks for the bike. It’s brill!