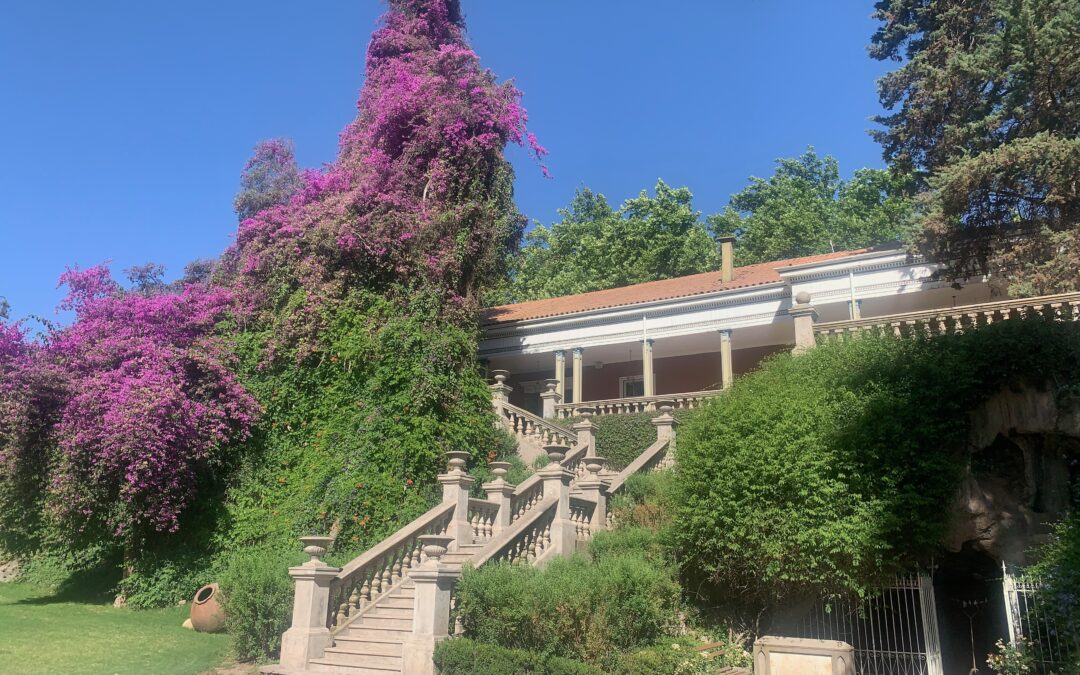 One of the reasons I wanted to visit the Santa Rita vineyard was something their main man in Ireland, Terry Pennington, said to me a while back about climate change, the drought and how the company was trying to mitigate the effects of global warming on wine production. I wrote about that in my previous blog and in The Irish Times online.

Another reason was to tell the story of the carménère grape. When I visited Santa Rita first some years ago, I was taken to a vineyard in the adjoining, and co-owned, Carmen vineyard where there is a monument to the place and the moment that the carménère grape was rediscovered. Knowledge of this grape was one of the many areas of life that had simply passed me by but when I heard the story, I just loved it and it deserves a retelling.

In the late 19th century, Europe’s wine producers were struck by a phylloxera plague that more or less wiped out all the vineyard vine stock, in France in particular, killing between two thirds and nine tenths of vines across the continent. The phylloxera is a pest native to north America, an almost microscopic sap sucking insect that feeds on vine leaves and roots, causing the roots to deform and cease sending nutrients up the plant, as it were, resulting eventually in its death. Ironically, given the origin of the problem, the solution was to restock Europe with vines from the United States, as well as cross breeding phylloxera-resistant vines through grafting and suchlike. But, in the heel of the hunt, somewhere along the way, the carménère grape went missing — presumed lost in the plague and never again to be found. A grape with a noble lineage that could be traced back to Roman times, after phylloxera it was listed officially as extinct.

But, fast forward to 1994 and a visit to the Carmen estate in Buin, south of Santiago de Chile, by a party, that included the French ampelographist (vine botanist) Jean Bourisquot. Apparently, while being shown various vineyards — this is our shiraz, this is our cabernet franc, this our cabernet sauvignon etc — they were presented with “and this is our merlot.” But workers in the vineyard seemed less sure and, after chatting to them, Bourisquot, said he would take away a sample of the vine for testing. “Chilean merlot” had apparently been known for some time as a wine that was just a little different from the merlot wines of North America. But what Bourisquot confirmed was that the so-called Chilean merlot was none other than the (until that moment) long lost carménère. Today, the monument to the discovery is in the vineyard at the point where suspicions were raised and November 24th, the day of the rediscovery, is marked by Carmen/Santa Rita, and other producers, as International Carménère Day.

There has been a renaissance and today, Chile produces 98 per cent of world carménère wines.

Wine experts — of which I am assuredly not one — describe carménère as having a peppery taste. Which is reassuring to me because I have always felt it had a sort of musty taste, which I like. But I think I like it most for the story of its beating the odds and surviving!

“The thing is, they were never really sure Chilean Merlot was actually a merlot,” said one of the Santa Rita staff to me during my recent visit. “They were a little confused as to what it might be. The fact that the [what we now know were carménère] vines were planted with merlot, added to the confusion.”

No one really known how the carménère vine survived in Chile when phylloxera did for it elsewhere. One theory is that Chile’s comparative isolation from the rest of the world — “cut off” by the Pacific, the Andes and the Atacama Desert — gave all its vines a better chance but survive it did!

Revisiting the story of carménère was one reason to return to Santa Rita. The other was Hotel Casa Real, which plays a central role in the estate and to which I was invited for some respite from campsites and hostels en route to Alaska. Poor me! The winery was founded in 1880 by Domingo Fernández Concha whose family owned it until it was bought by the Grupo Claro in 1980. What is now the hotel was the Concha family summer residence and, as a hotel, it just oozes an old world, colonial charm with squeaky polished floorboards, family portraits, and chintzy furniture. Notwithstanding its current function, the place still manages to feel like a family home. 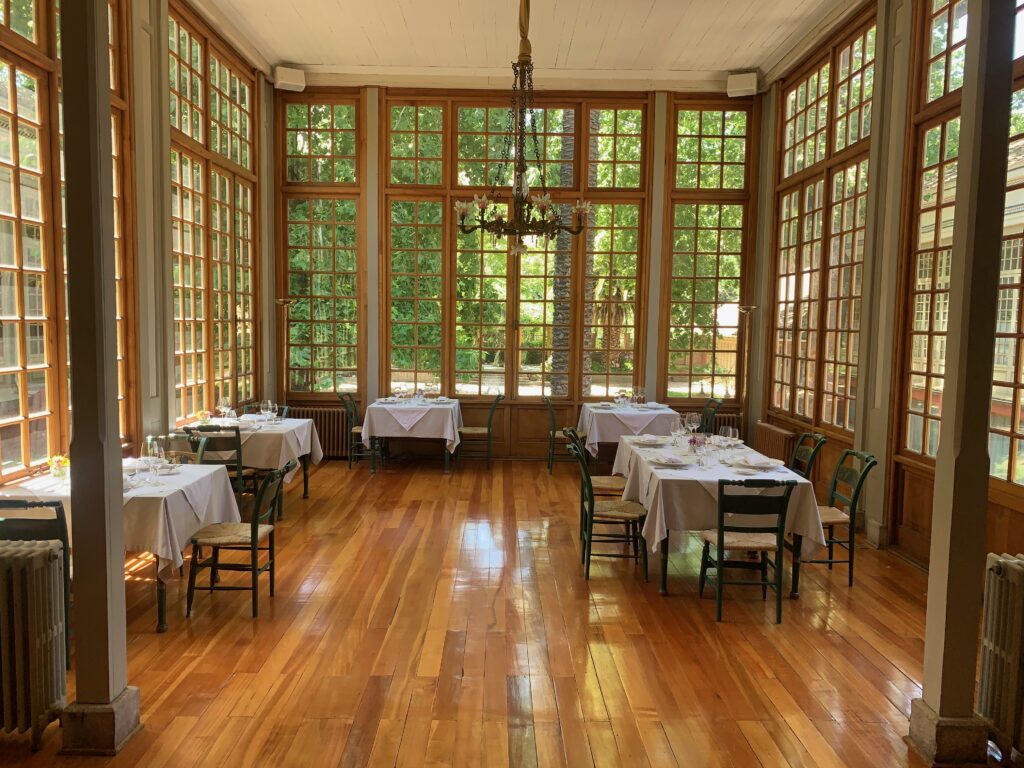 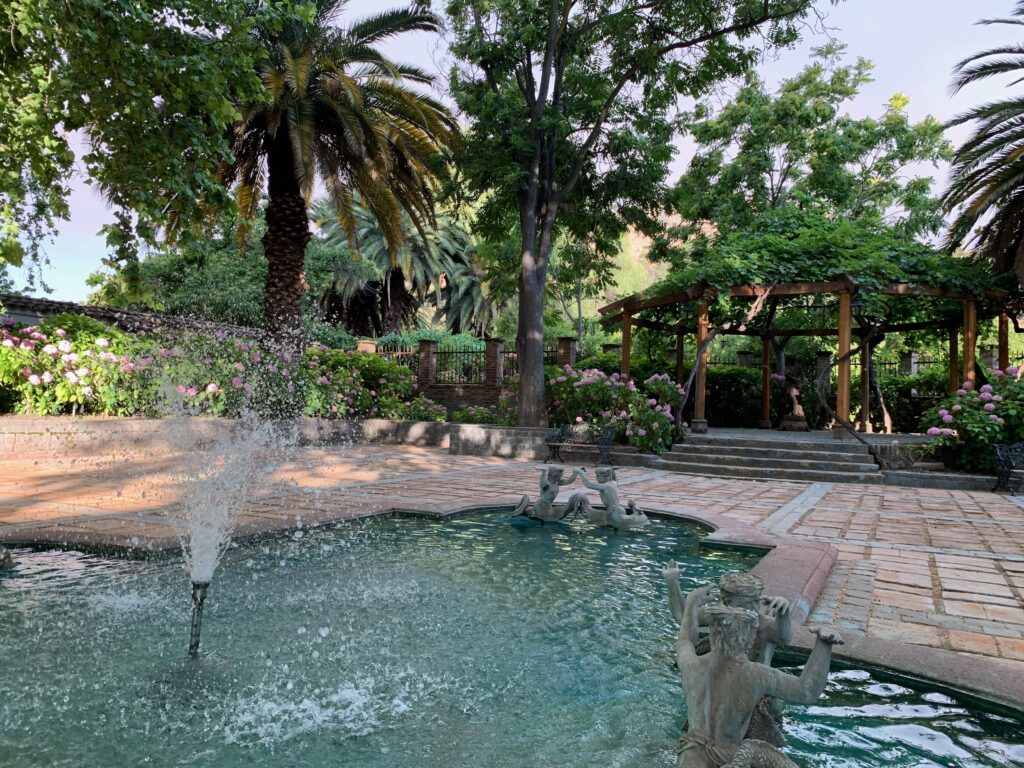 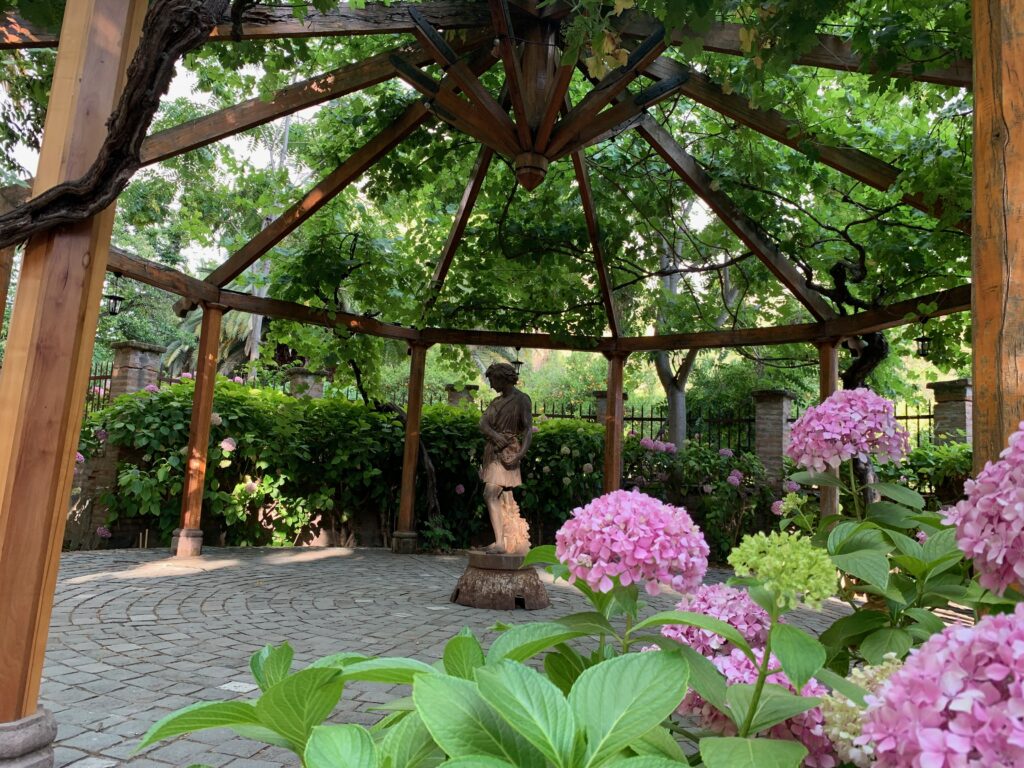 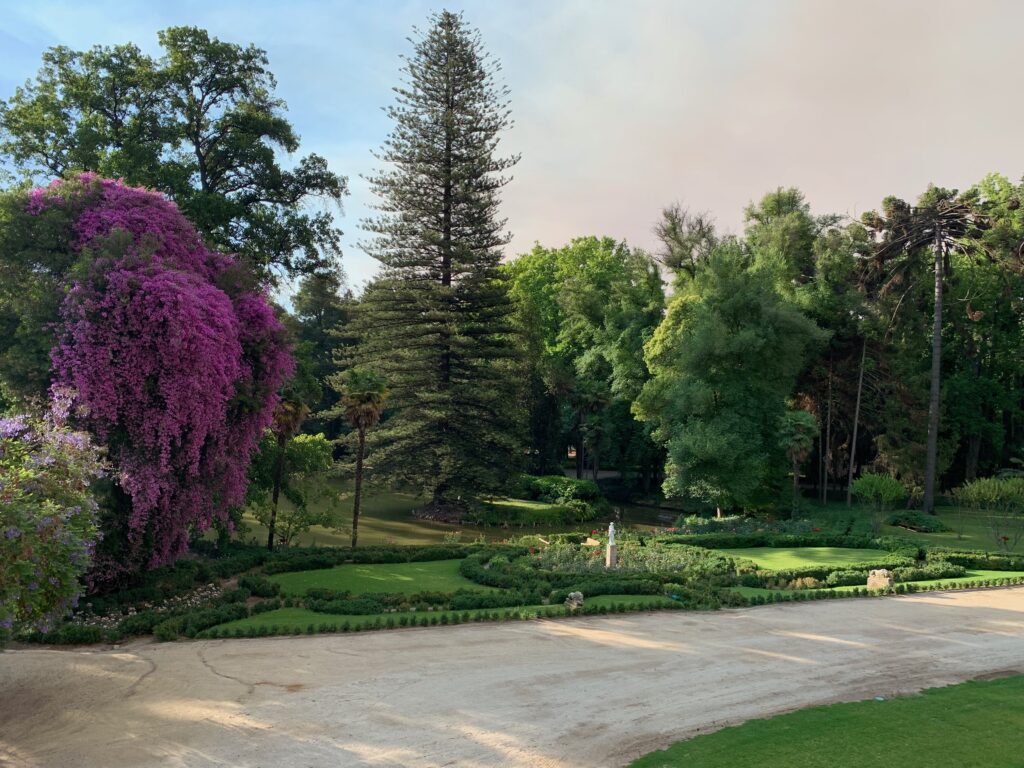 The view of the gardens from the front terrace.

It sits in a 40 hectare park, designed by the French landscape gardener Guillaume Renner. From the front terrace, guests look out on mature trees, a lake and formal beds framed by privet hedging and defined by elegant garden statues. The front of the hotel is festooned by an enormous pink bougainvillea, reputed to be the largest in all of South America. Beside the hotel is a medium-sized chapel, built in 1885 and combining Roman, Norman and Neo-Gothic styles. The whole ensemble is delightful. 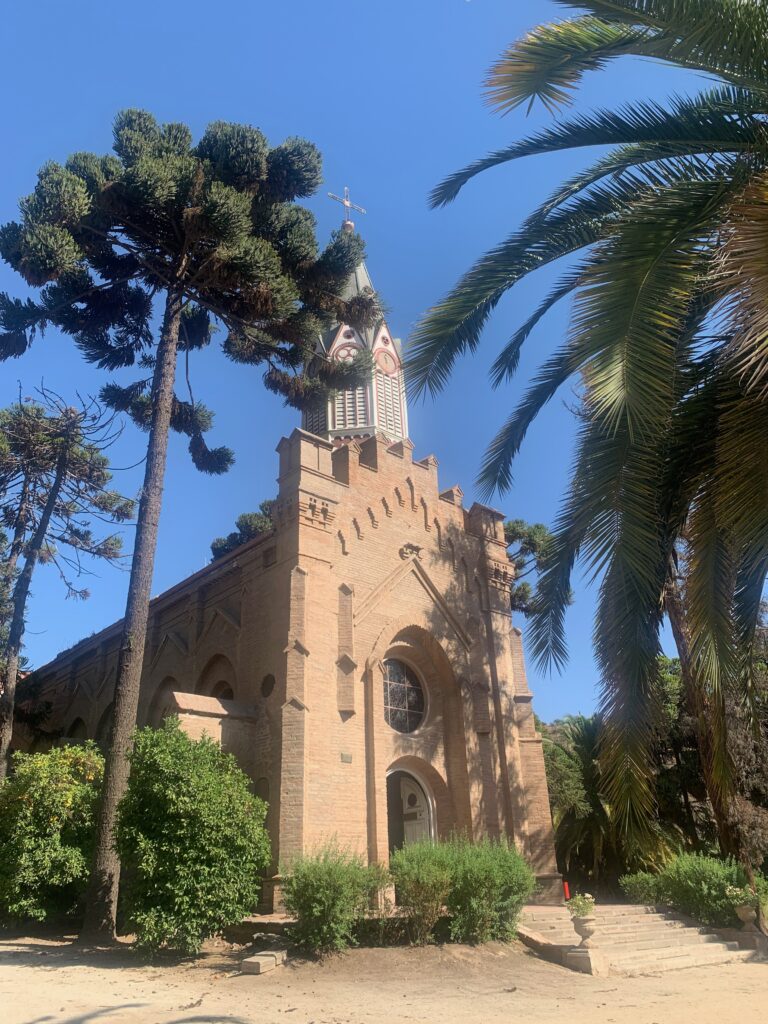 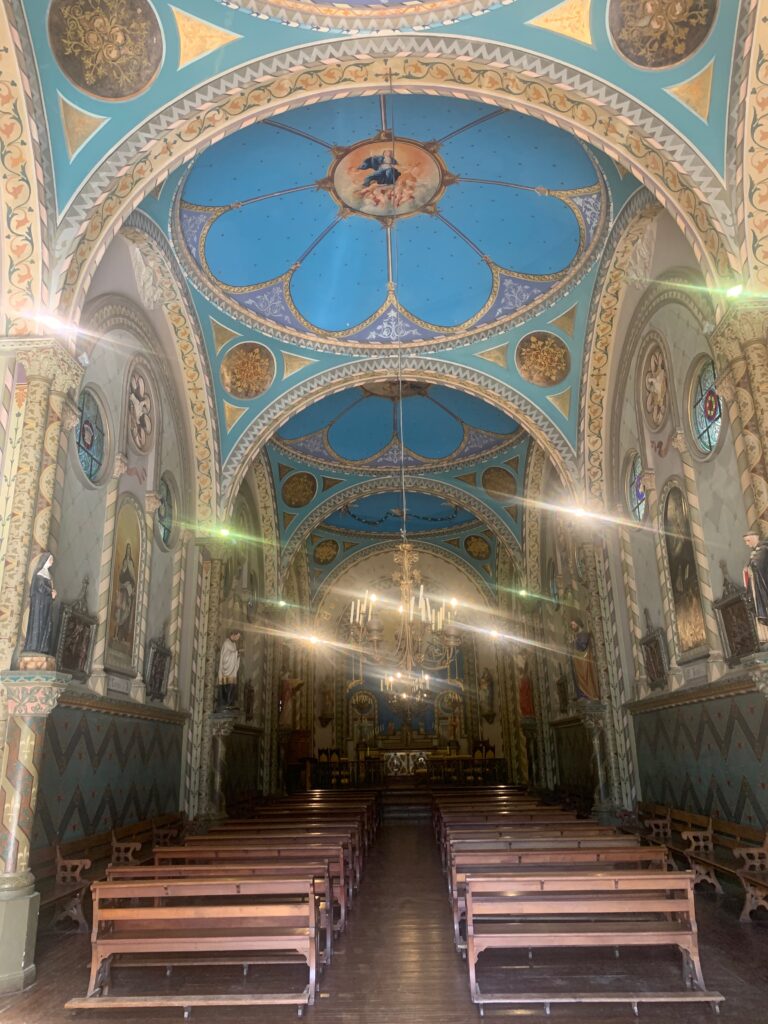 The church, exterior and interior.

One of the many charms of the place is that one day every mid-week, Doña María Luisa Vial, the widow of Richardo Claro, group founder and purchaser of the winery and who is in her mid-80s, comes from her home in Santiago to walk the gardens and reassure herself that everything is just as it should be. Unfortunately, I have never managed to bump into her but I suspect she is rather interesting.

The winery welcomes day visitors, offering tours of the vineyard, including cycling tours, entry to a museum, which has artifacts from Chile’s ancient history, a cafe and restaurant, and, of course, a wine shop. In December, the winery received Chile’s best wine experience tourism award

The aim, according to the hotel’s tourism manager, Diego Valenzuela, is to preserve the heritage of both the wine that is produced and the place itself, and to make guests feel they are in a home, which it succeeds in doing, in my opinion. “This is not a museum hotel,” says, “because you come inside here and you can touch everything, you can sit in the chairs.” 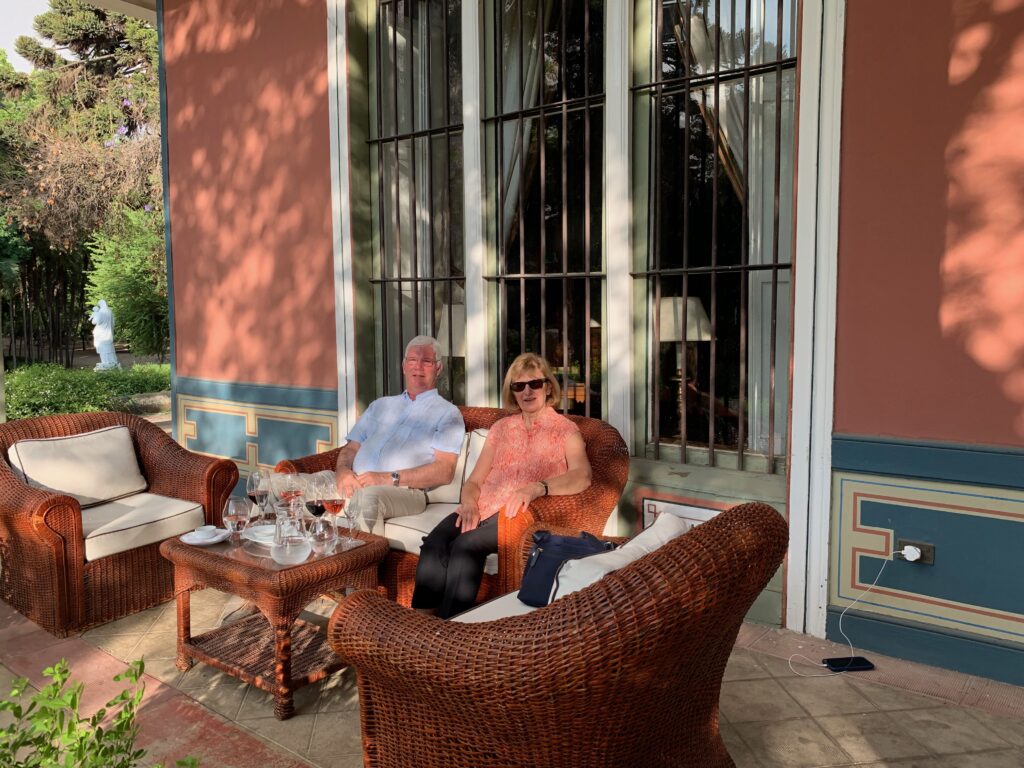 Pre-dinner relaxing on the front terrace.

Ann and Roger Whittaker from Surrey, England, seemed very much at home sitting on the terrace before dinner.

The hotel has 16 accommodations, a mixture of bedrooms and suites. But the defining features, for me at any rate, are the dining room, which is a lovely elevated conservatory-style high ceiling and whose three sides overlook an inner courtyard, with dappled light, a fountain and gazebo. This, and the various walk-through drawing rooms, all of them with that slightly lived-in feel of sofas you want to flop into and those family portraits — all the complete opposite of the personality void that so often attends other really up market hotels. 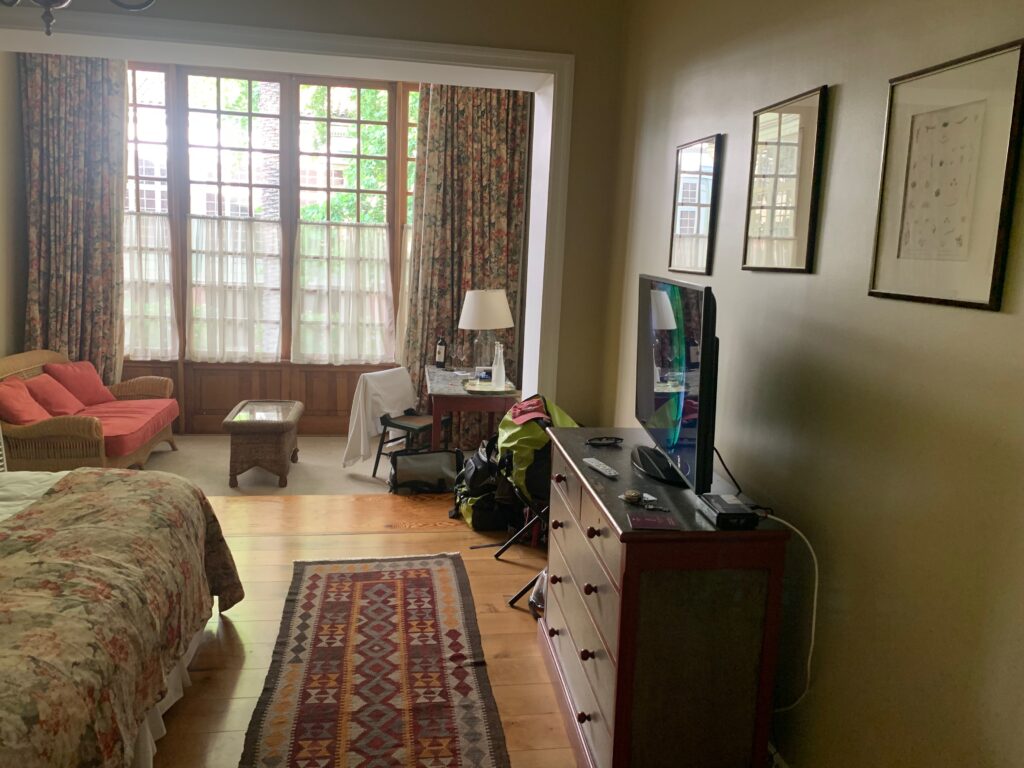 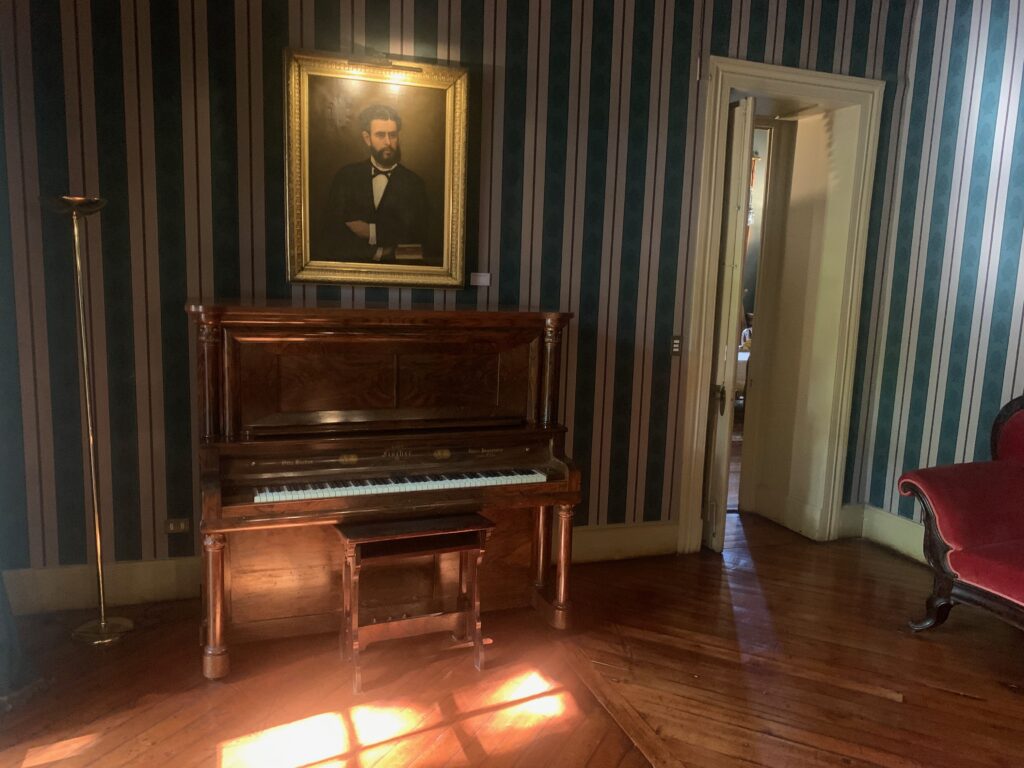 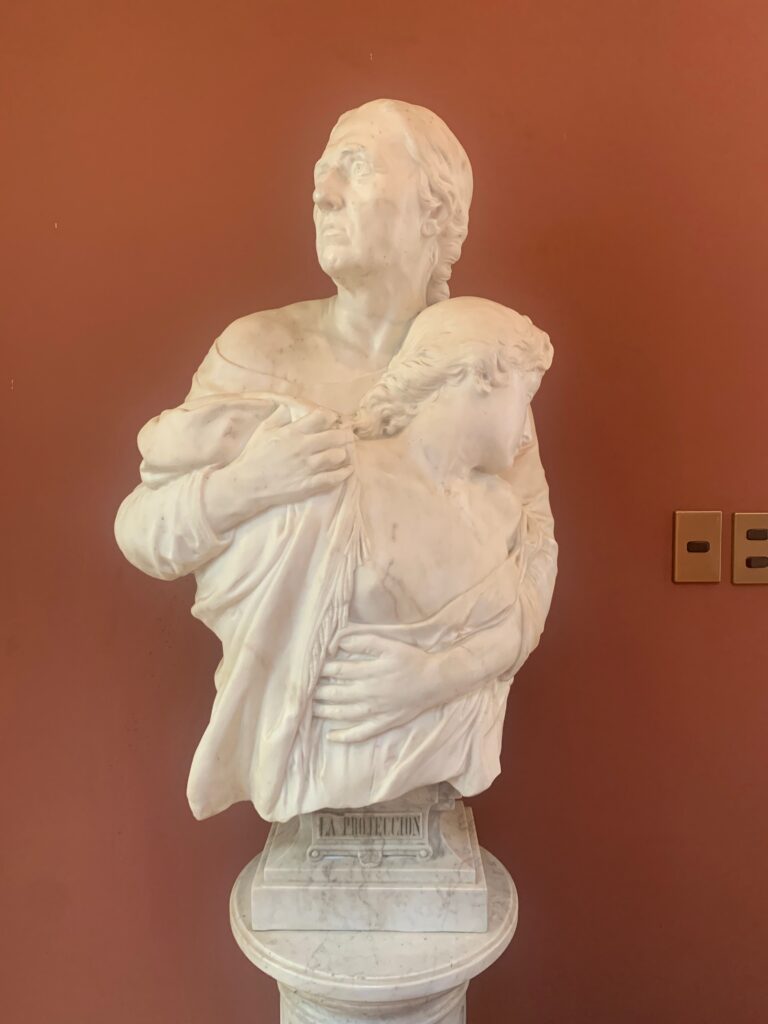 Bedroom, one of the several drawing rooms with former owner family portraits and a corridor bust.

Oh, and there’s a full-sized billiard table too, fine dining and the wines, surprise, surprise, are not to be beaten. . .

And now, it’s back to hostel.com for me!