Che and the myth of those Motorcycle Diaries 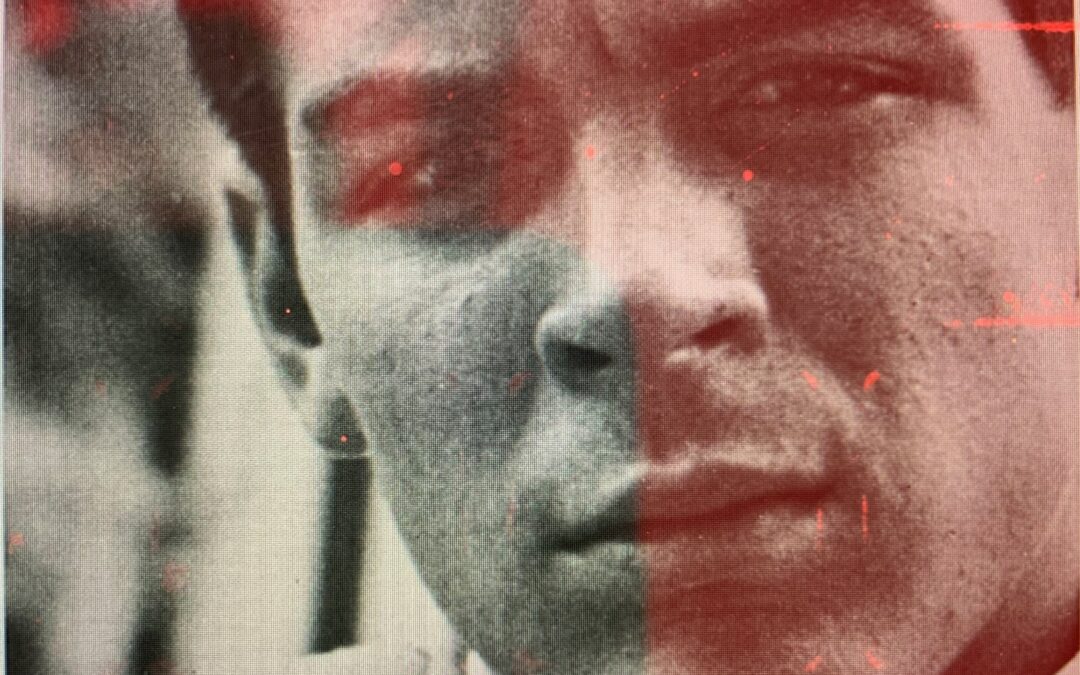 I am writing this dispatch from this small town in south central Chile and I am doing so for a very particular reason.

Over the past number of years, when I have mentioned to people my wheeze about riding a motorbike from Tierra del Fuego to Alaska, countess have responded along the lines of “Ah ha! The old Motorcycle Diaries trail, eh?” — a reference to Che Guevara’s famed journey and book of the same title. Guevara’s 1951-1952 motorbike escapade has become very much part of the wider Che story and, let’s be honest, is also something of your average adventure biker’s wet dream.

My problem is that it is mostly myth, or rather has evolved into a narrative that essentially isn’t true. In many ways, Che is a very attractive character. Unusually handsome, he had a terrific smile and a warm, charming personality. In the 1960s and ’70s, many left-leaning young men wanted, in effect, to be Che and many woman wanted a man like him (during his life, Che was more than happy to oblige in that department). But the essential proposition about his biking adventure, doesn’t stand scrutiny.

The myth is that in late 1951, 23-year-old Che, an Argentinian medical student of sometime Irish extraction, and a pal, Alberto, hatched a plan to ride a Norton 500cc, which they nicknamed La Poderosa, the Mighty One, from Buenos Aires through Latin America and up into North America. While the journey, such as it unfolded, helped radicalise Che because of the poverty and grinding inequality that he saw, very little of the adventure actually happened by motorbike.

The pair did indeed head west from Buenos Aires, riding across Argentine Patagonia to the Andes and into the town of Bariloche, from where they crossed a lake into Chile and down onto that country’s central valley. It was then a case, as with me, of heading north. Today, that journey can be done on a modern motorway; 70 years ago, it was mostly unpaved gravel roads and, in the diary that became his book, Che described repeated punctures. I know the feeling. . .
Just short of the town of Lautaro, La Poderosa crashed.

“…the bike took a sharp twist sideways sending us flying to the ground,” Che wrote in The Motorcycle Diaries. “Alberto and I, unharmed, examined the bike — finding one of the steering columns broken and, most seriously, the gearbox smashed.”

They hitched a ride to the town and, having come here myself because of that, I wonder what they’d make of it now? It’s a medium-sized place of maybe 25,000 people, and is dusty and unkempt, like a lot of others in the region. That said, the main drag, Avenida Bernardo O’Higgins, is getting a makeover but despite the roadworks, on this Friday evening, its busy enough. 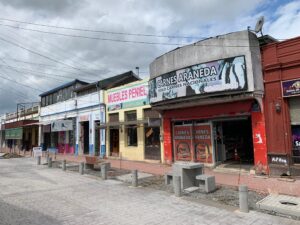 Avenida Bernardo O’Higgins, Lautaro — a hotch-potch of different outlets and an upgrade in process.

The shops are a typical hotch-potch selection selling everything under the sun. Bra, knicker, fabric and drapery stores vie for attention with hardware shops, vegetable and dried bean outlets; small retail corridors at right angles to the pavements grandly call themselves “malls” but actually contain only a handful of shops. Gaudy neon signs flash open or closed, as the case might be. There are several of those cavernous, oversized, Chinese-owned stores, places so crammed with goods they make TX Max and poundshops appear empty by comparison.

There’ a fashion outlet called Vintage Paris, a builder’s suppliers, a petrol station and several motor and tyre repair shops, numerous fastfood places and several banks and dentists. There are at least three one armed bandit gaming joints, pathetic gloomy places filled with flashing neon lights, garish pictures of pneumatic young women, techno “music” and, in each outlet, a single elderly player working a machine on their own.

One block back from it all, a railway line slices through the town with precious little separating it from everything else. Children play ball in dusty corners and dogs roam freely, or just loll about, waiting for something interesting to catch their attention — a passing wheel or a scrap of food. There are plenty of vehicles that look new and would have cost a lot of money. Equally, while not everyone is poor, those who have a lot less are equally visible, as are those who have fallen through the cracks. Che would have noticed that, I think.

Many of the buildings are post early 1950s but many others are clearly older and would have been there when Che and Alberto limped into town. They are mostly timber clad and painted fading shades of green, pink, yellow or red. They look strangely Russian and, in snow, they could be in scenes from the film Dr Zhivago. 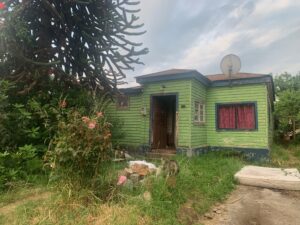 Lautaro homes that, in a different climate, could appear plausibly in Dr Zhivago 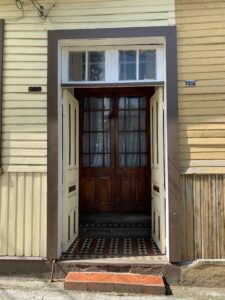 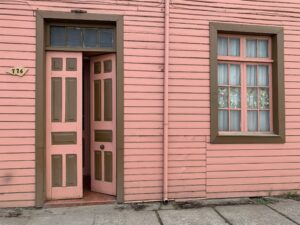 Just off Vicuña Mackenna street (named after the Chilean writer of Irish and Basque lineage, a grandson of Monaghan-born Juan Mackenna) around the corner from my hostel, there’s a defunct garage and I wonder could Che and Alberto have brought the bike there? It’s possible, I suppose, but I’ve no way of finding out, at least not in the few hours I’ll be here.

Che writes that the pair divided their time in Lautaro between working to fix the bike, scrounging food and drink from strangers and trying to seduce the wife of one of the mechanics, as one does.

When they left Lautaro, Che driving, Alberto riding pillion, they careered into a herd of cows, “at good speed”, according to Che. A screw came off the back brake and Che writes that he “threw the hand brake [a hand brake on a motorbike – imagine!] which, soldered ineptly, broke too”.

“For some minutes I saw nothing more than the blurred shape of cattle flying past us on each side, while poor Poderosa gathered speed down then steep hill ,” writes Che. “. . . in the distance a river was screaming towards us with terrifying efficacy. I veered to the side of the road and in the flash of an eye, the bike mounted the two meter bank, embedding us between two rocks, but we were unhurt.”

They had only gone a few miles north from Lautaro but that was that: little more than six weeks of an adventure that continued for a further six months. . . but none of it on motorcycle. So much for a full-length book, The Motorcycle Diaries. Thereafter, they hitched a ride on trucks and ferries, north into the Atacama Desert, Peru, Colombia and Venezuela.

But the motorcycle diary myth endures, inspiring young men (and the not-so-young) to embark on daft adventures.