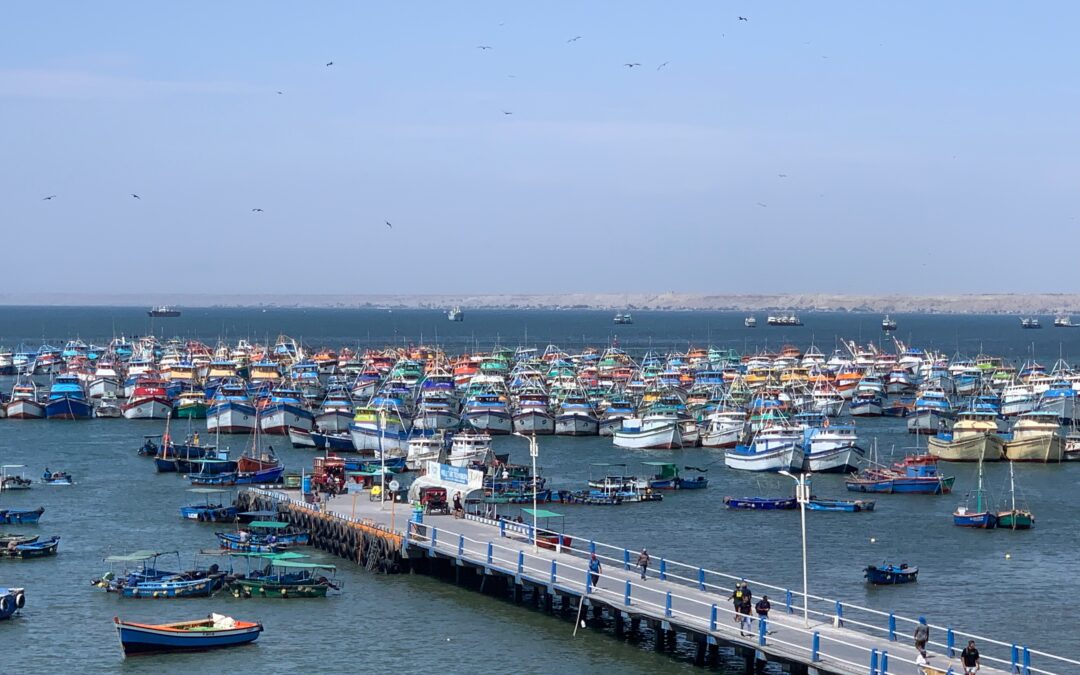 Paita on the north coast of Peru close to the border with Ecuador is a place easily overlooked. Its small enough not to make much of a dent on most maps — even though it calls itself a city and has a population close to 200,000 — and it’s also a little off the Panamericana and therefore likely to be by-passed.

I wanted to spend a final night in Peru before crossing into Ecuador and Paita, being on the coast, caught my eye. Getting there turned out to be touch and go. I left Chiclayo for the 200 km dash to Piura, with just two fingers of fuel on the tank gauge. No problem, I though, I’ll fill up on the way; sure the country is awash with petrol stations (which it is and I don’t understand it — you sometimes find half a dozen in a row and they can’t all be profitable . . .). Turns out that this particular 200 km stretch of the Panamericana is 100 per cent bereft of petrol stations — the only such stretch in the entire country, I suspect. Hurtling through a dune desert landscape, I watched as two fingers became one, and then the fuel light appeared, with that note saying the range left was 48 miles, then 47, then 46. . . I poured my two spare tanks into the bike’s tank and carried on. A police patrol car and occupants lounging on the far side of the road said the next station was 80 kms away . . . in Piura. The first guy to gouge me — the owner of a dusty run down cafe in the middle of nowhere — took 20 soles (about €5) for maybe a single liter. He poured it in so fast that I couldn’t tell how much he gave me. The next guy, a puncture repair bloke operating out of a corrugated shed in the middle of nowhere else, charged €7.50 for what seemed like a small coke-bottle full. Still, between the pair of them, it was enough to get me over the line, as it were.

From Piura, which is inland, to Paita on the coast, the road crosses a wide flat open area of maybe 20 kms and so bleak and unpromising does it look that, when I hit the outskirts of Paita, I feared the worst. Here comes another filthy, shambolic dump where I’ll sleep in my clothes in some flea pit and scarper first thing in the morning before anything else wakes in the bed. And then the way through the town suddenly plunged to the coast to reveal . . . the largest collection of small fishing boats I have seen anywhere, ever. I reckoned there must be a thousand of them, bobbing up and down in the water, a natural harbour with a beach. Chatting to someone later, that estimate was reckoned to be about right. 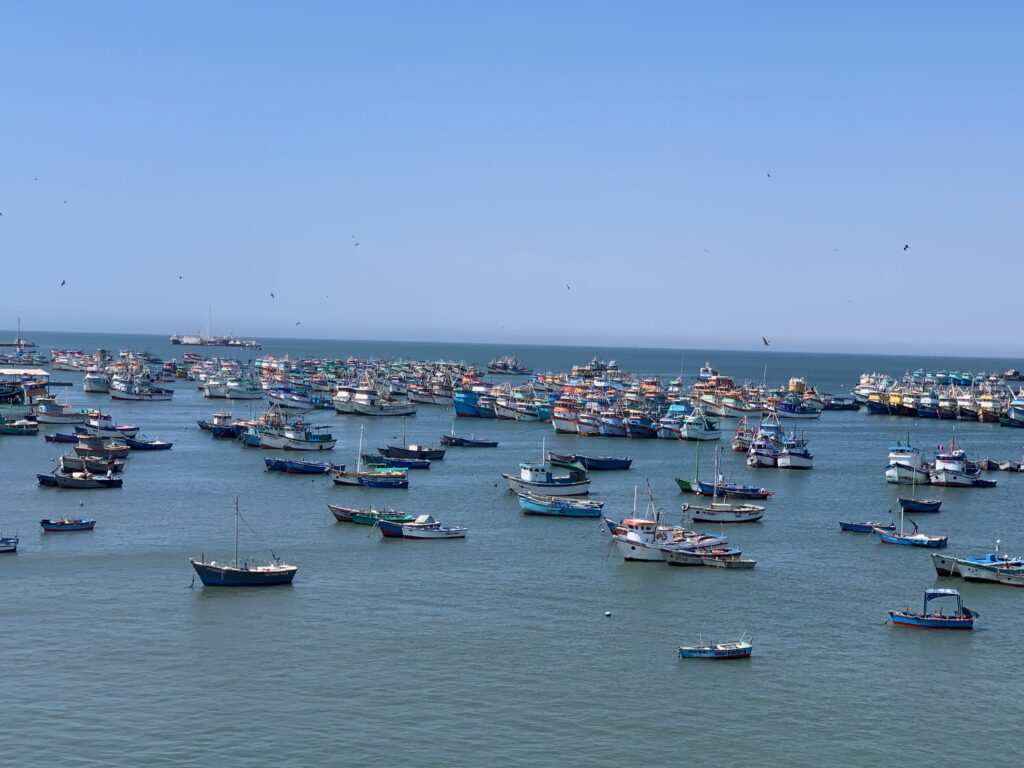 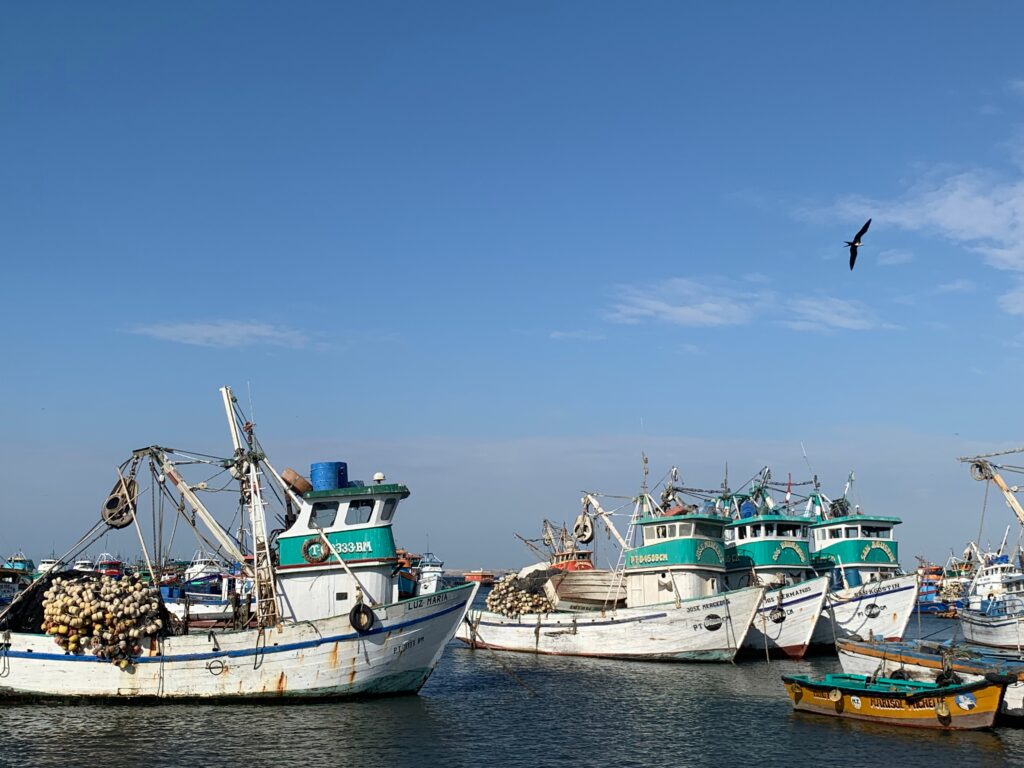 They were painted all sorts of different colours but mainly blues, white, light greens and some yellows and reds. They were heavy timber boats with wheelhouses forward and prows that arched sharply upwards, making the boat seem to almost stand out of the sea. They were lined up, each tied securely to the next, making a line across most of the bay. To the right of them was a modern jetty at which huge cranes with buckets were unloading cargo from the Oceanlove, a medium-sized bulk carrier, and pouring the contents into waiting trucks. The fishing boats were moored many lines deep and the horizon between them and the sky was broken by a forest of masts and aerials and lots of sea birds.

The most engaging of the birds were the Magnificent Firebirds — hovering and lurking, hoping for the best — but there were pelicans too, gangly birds when they land but aces at flying, which they do just inches above the waves, gliding effortlessly before landing with a great awkward splosh. The Firebirds are extraordinary: dark and with a wide, angular V-shaped wingspans, they hover and glide at a great height, their tails sometimes splayed open with two very sharp points, sometimes closed and looking like a dagger. But they don’t seem to swoop, just glide about in clusters and then, suddenly you look up, and they’re gone.

I couldn’t believe the number of boats. Surely they didn’t just serve this town/city? How could they all make money? The road down to the coast took me right to the seafront and, around a corner, a hostel presented itself — sanctuary for the night! 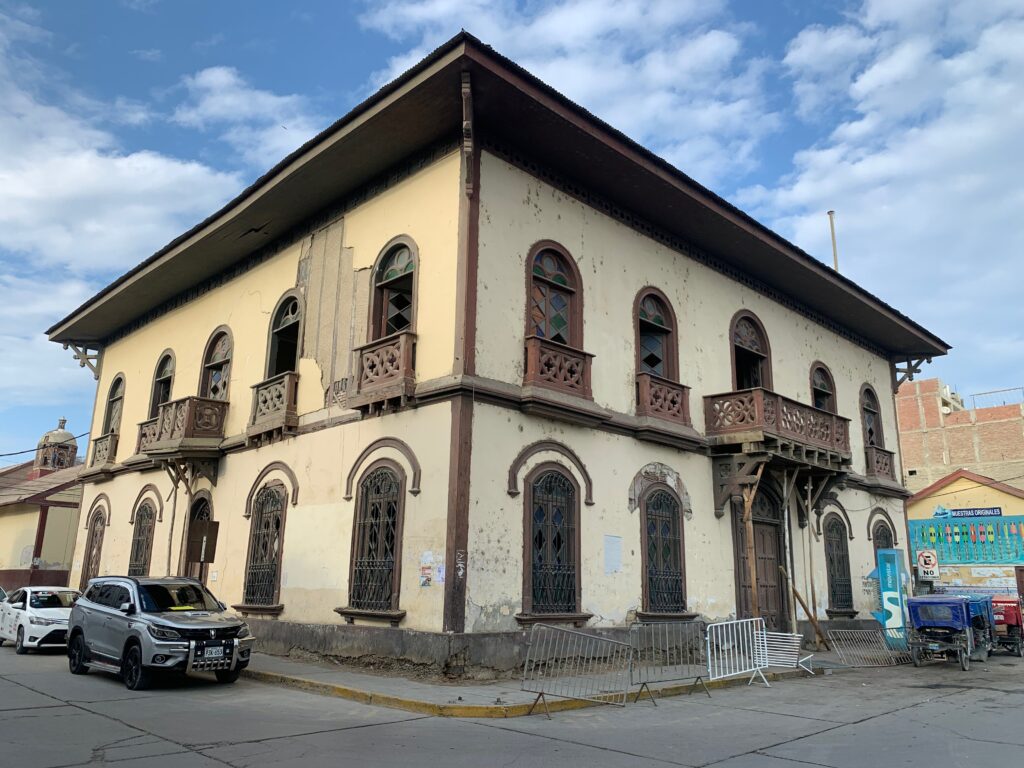 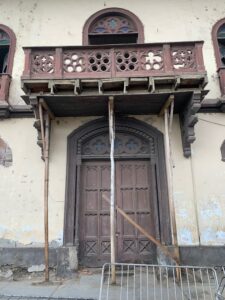 The old customs house… still standing but only just. 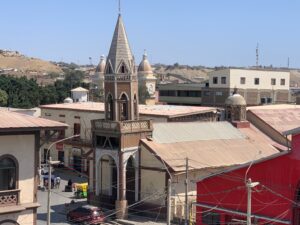 The closed church and its toppling-over steeple.

Next day wandering around, it was clear that Paita had a lot of history to it. There was the old semi-derelict customs house just by the hostel — a two storey building that was in part propped up by scaffolding poles, and with road all around it. It was a beautifully proportioned, square building with tall fan-light windows and balconies and must have looked commanding in its prime, now long gone. Behind it was a timber church, with a portico entrance and a spire on top — a spire leaning precariously forward and looking like, another few inches, and it would topple, crashing to the ground. A woman in a shop opposite told me it was the Iglesia Antigua de las Mercedes church but that it hadn’t been used for at least 30 years.

All over this part of the town there were dilapidated buildings with first floor verandas that must have been very stylish in their day. One could see families sitting there of an evening, relaxing and chatting, or summer parties taking place, laughter and conversation filling the air, along with the chink of glasses.

Perhaps the most interesting building was the one that had certain pretensions, and which, rather pathetically, announced itself as the “Club Liberal”. It fronted onto the busy main street hugging the coast and part of the ground floor was given over to a not very upmarket tee-shirt and jeans shop. The building ran back from the road right to the edge of the beach and to the sea itself. I doubt that the Club Liberal of Paita today has fraternal relations with its namesake National Liberal Club in Whitehall, London, but I wouldn’t be surprised if, back in the day, it had.

Paita used to be a great whaling port. The city was founded by the Spanish in 1532 and was their capital for north Peru before they move the administrative function inland to Piura because of the activities of English pirates. But its prime was in the 19th century when whaling was big in the Pacific, and British and American whalers used it for supplies and repairs, and for recruiting seamen as well. The Americans established a consulate and hospital in the town, such was the volume of trade and the numbers of visiting US citizens. The boom years lasted until the 1860s. . . bad timing for the Club Liberal which was founded in 1863.

The building today really is falling down but, reflecting perhaps the spirit of its founding times, it is carrying on gamely. What was once a rather grand double door entrance leads via bare wooden stairs that split, fanning to the left and right, to a large first floor landing that runs the full front of the building. Balcony windows there overlook the street below and then, the landing leads into a huge hall-cum-ballroom (perhaps) which has a long skylight ceiling that looks ready to collapse. Nonetheless, there remains in place a hanging brass chandeliers and two large gold-coloured mirrors, the remnants of more gracious times. The wooden floor is half polished, from over use rather than nurture, I suspect, as it is also host to many bird droppings. This grand, long room leads to a balcony restaurant overlooking the beach and harbour and, in its heyday, must have been the place to socialise. Today, two young women, Zaida and Zarella run the bar and restaurant . . . which serves surprisingly good food.

But everywhere is peeling paint and rotting timbers. Its strange but you can wander about the place, poking your nose in here and there and no one will stop you. There’s a sort of sapped spirit, lack of interest in what anybody might be up to. Plaster on the rear facade that faces the beach is falling off revealing the wattle and daub skeleton of the structure. The entire building rests on foundation poles rammed into the sand. It all looks like one severe sea storm could wash the lot away. And yet it carries on. . . in a manner of speaking. 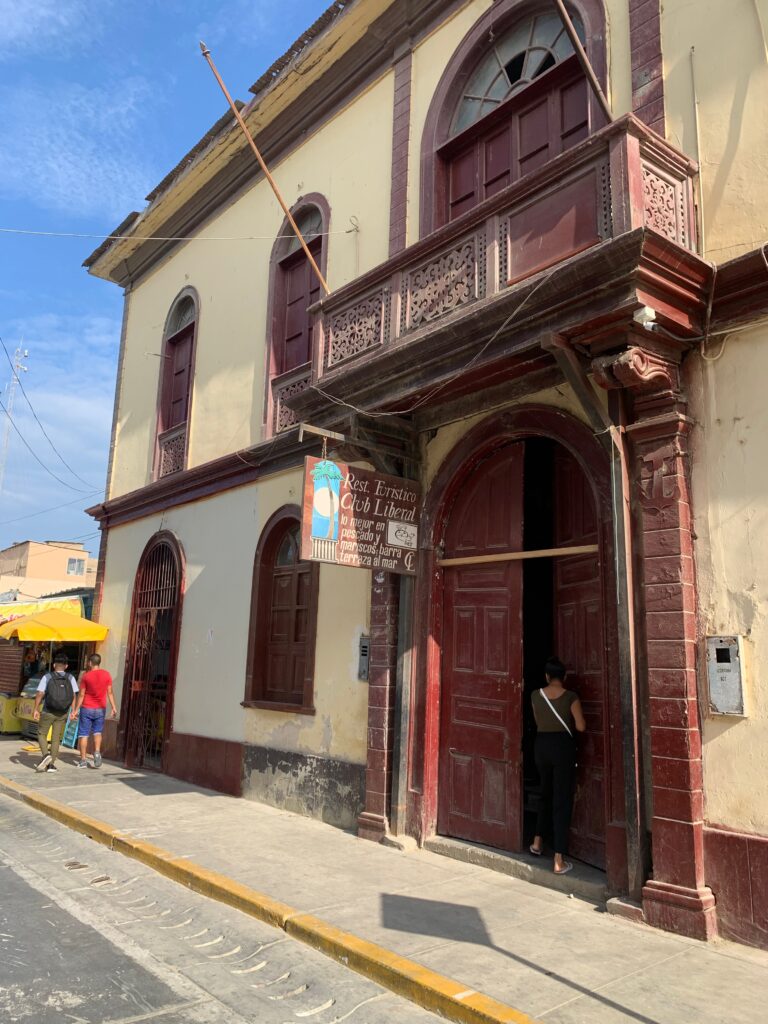 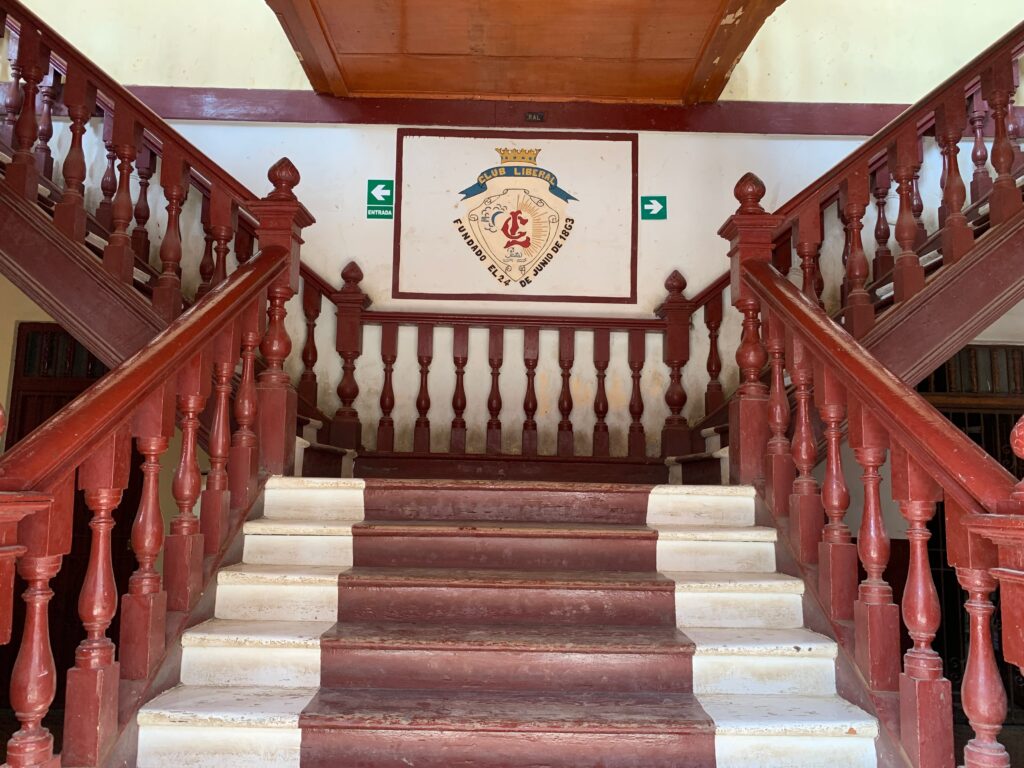 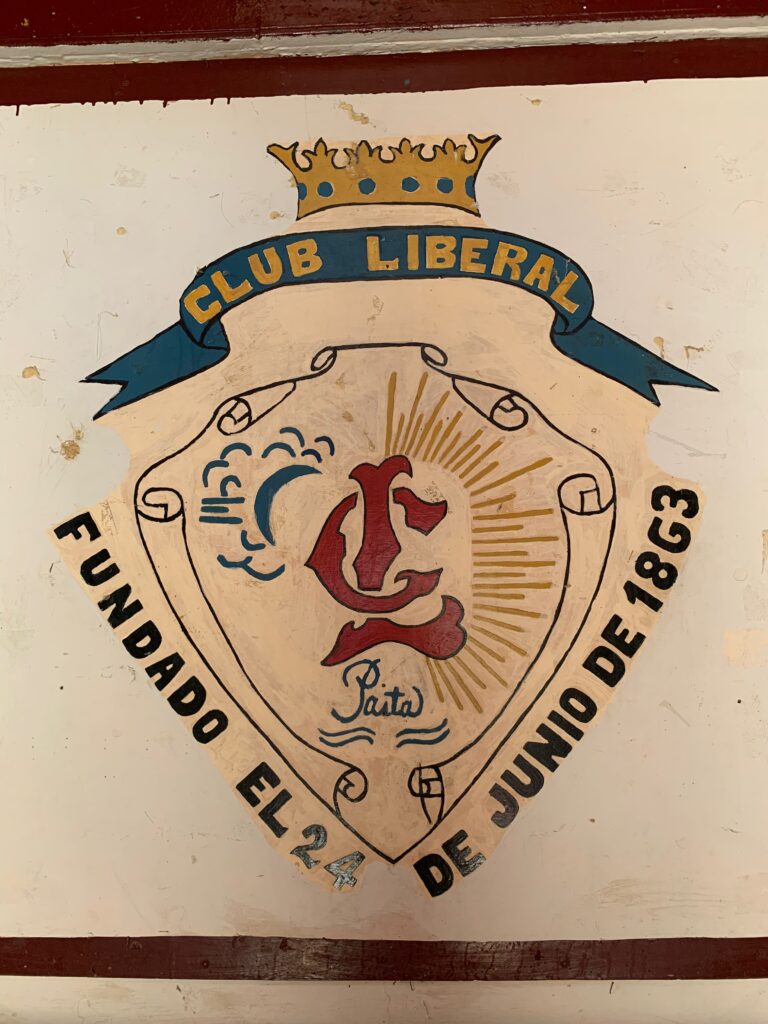 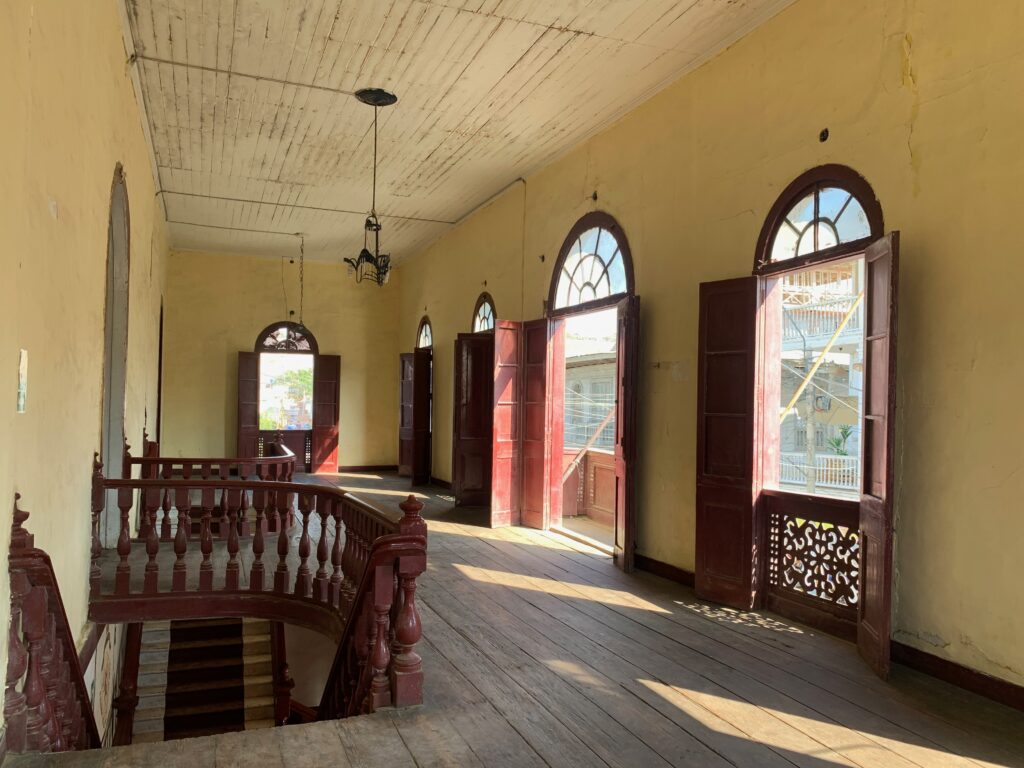 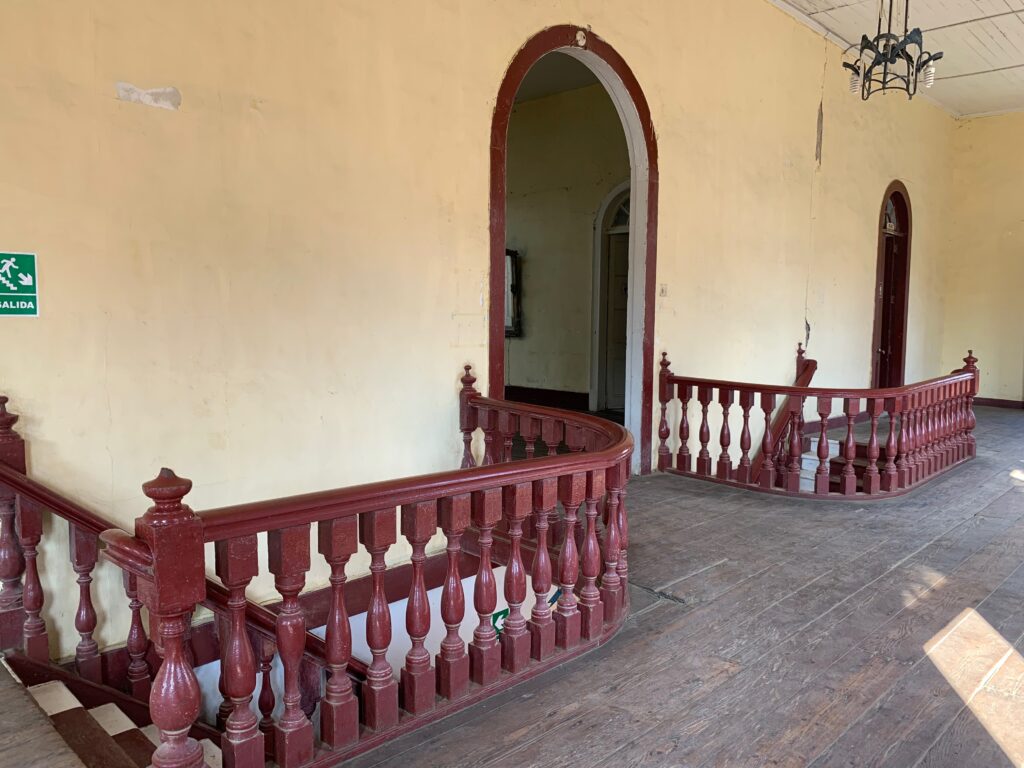 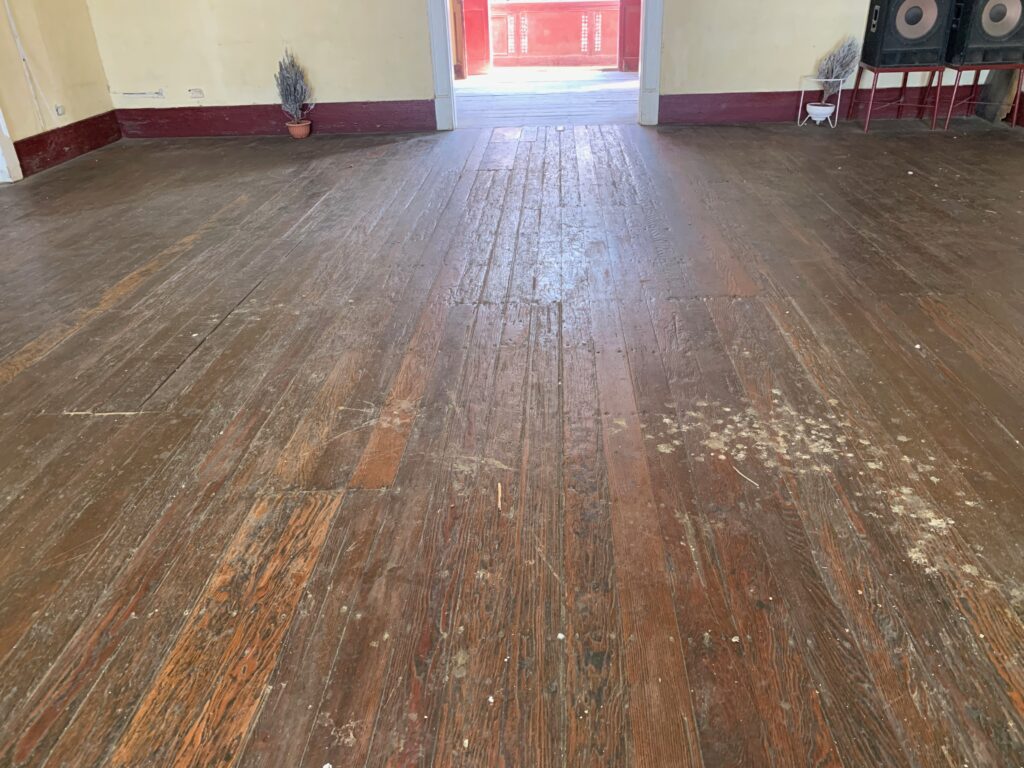 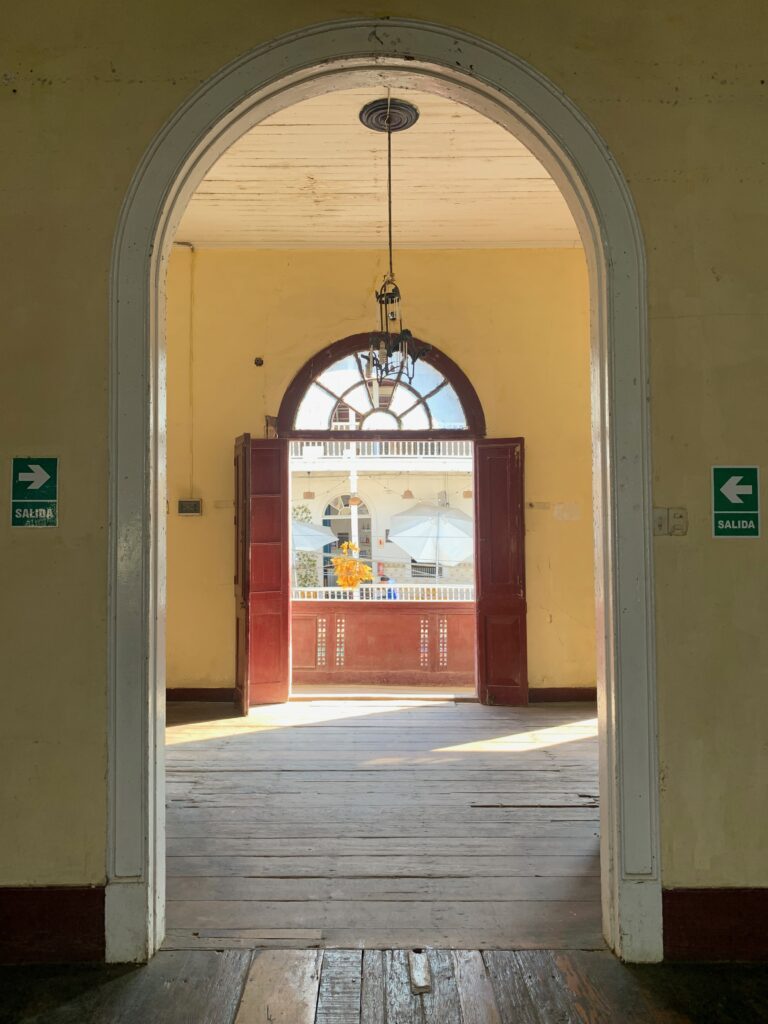 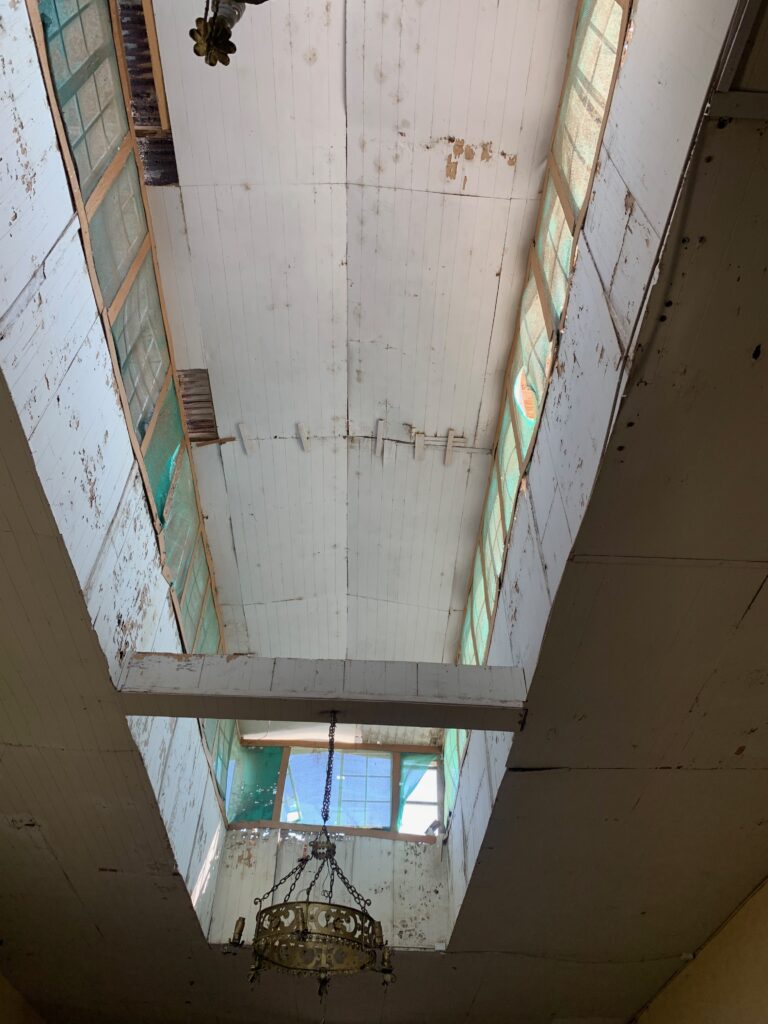 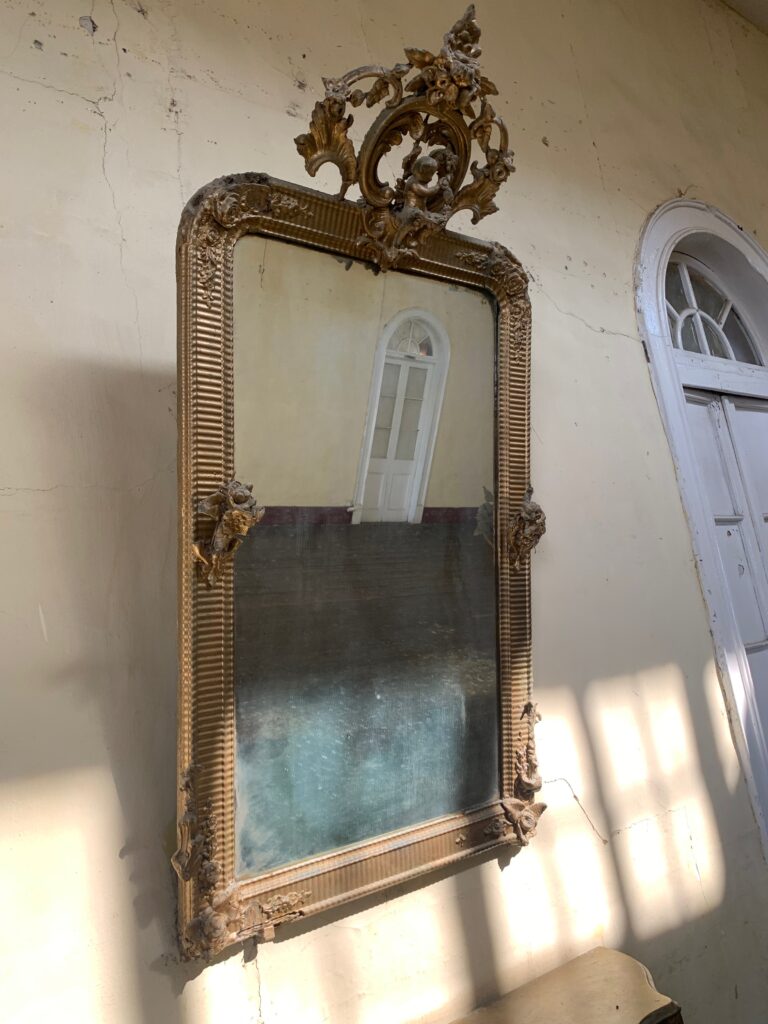 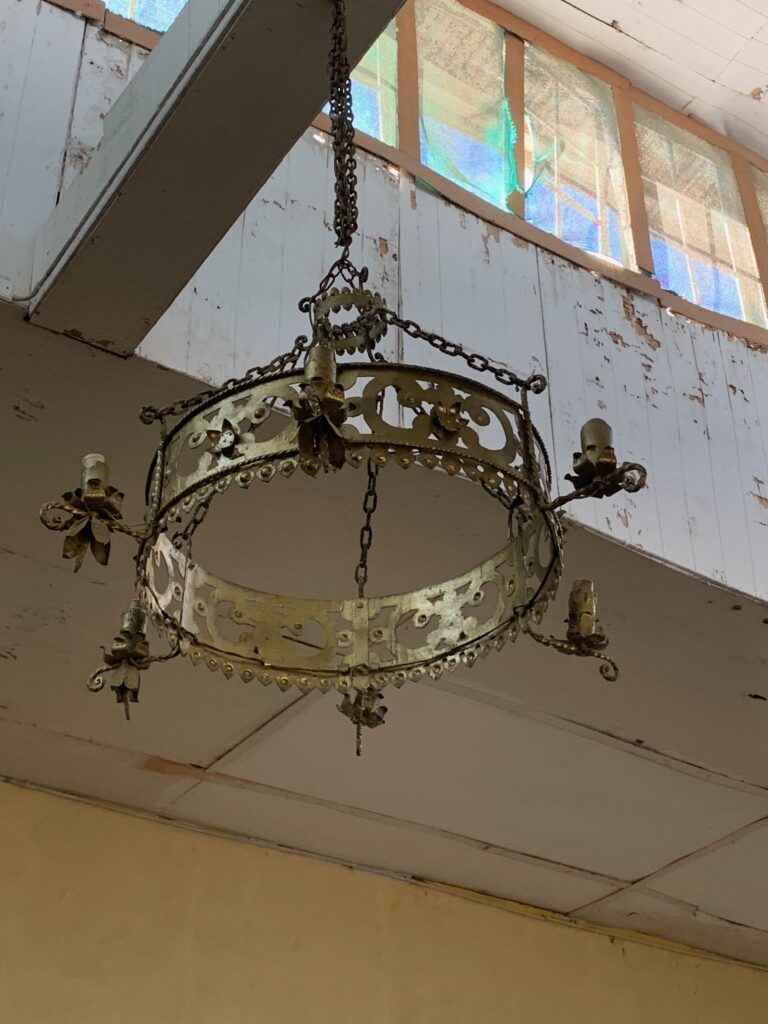 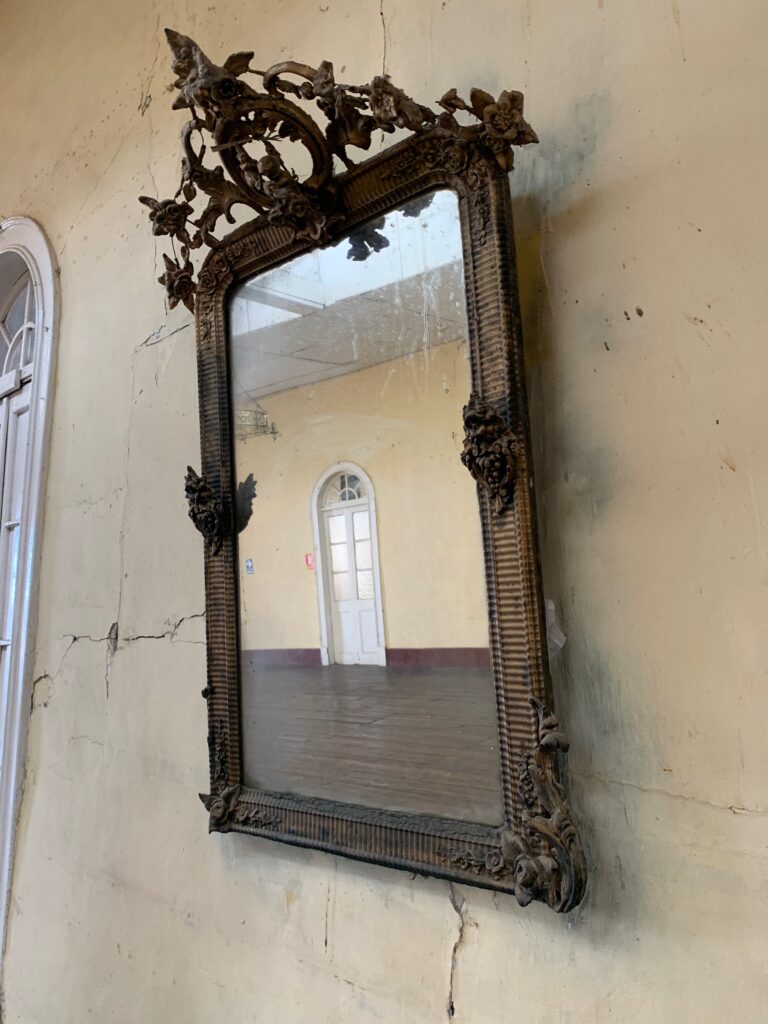 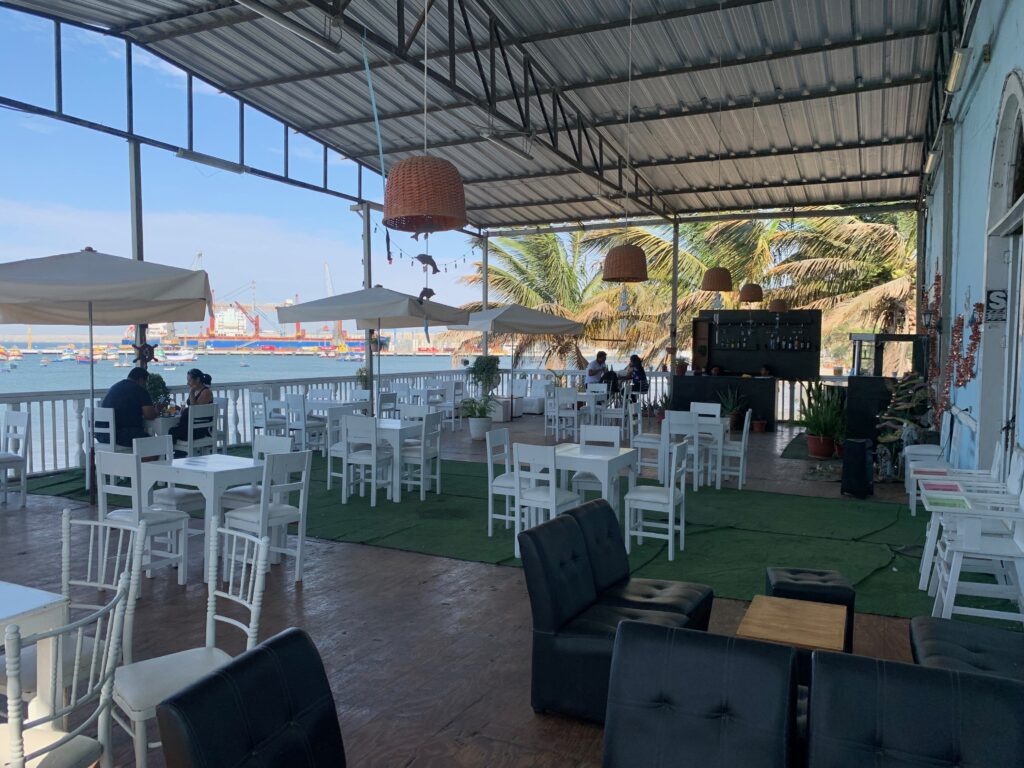 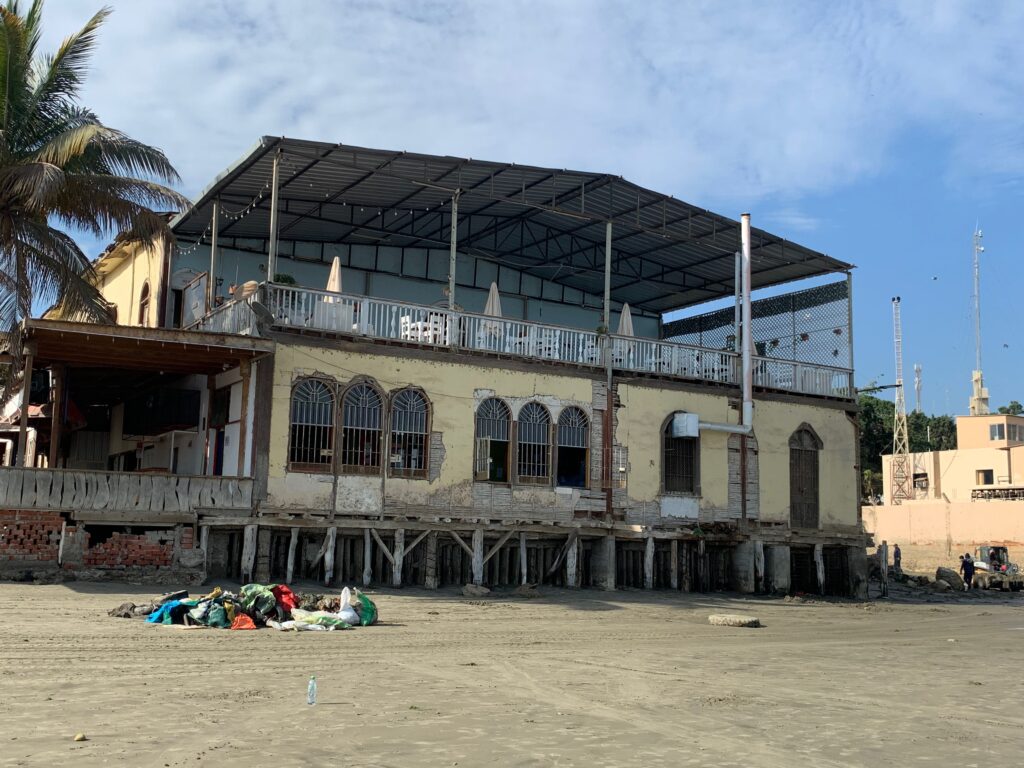 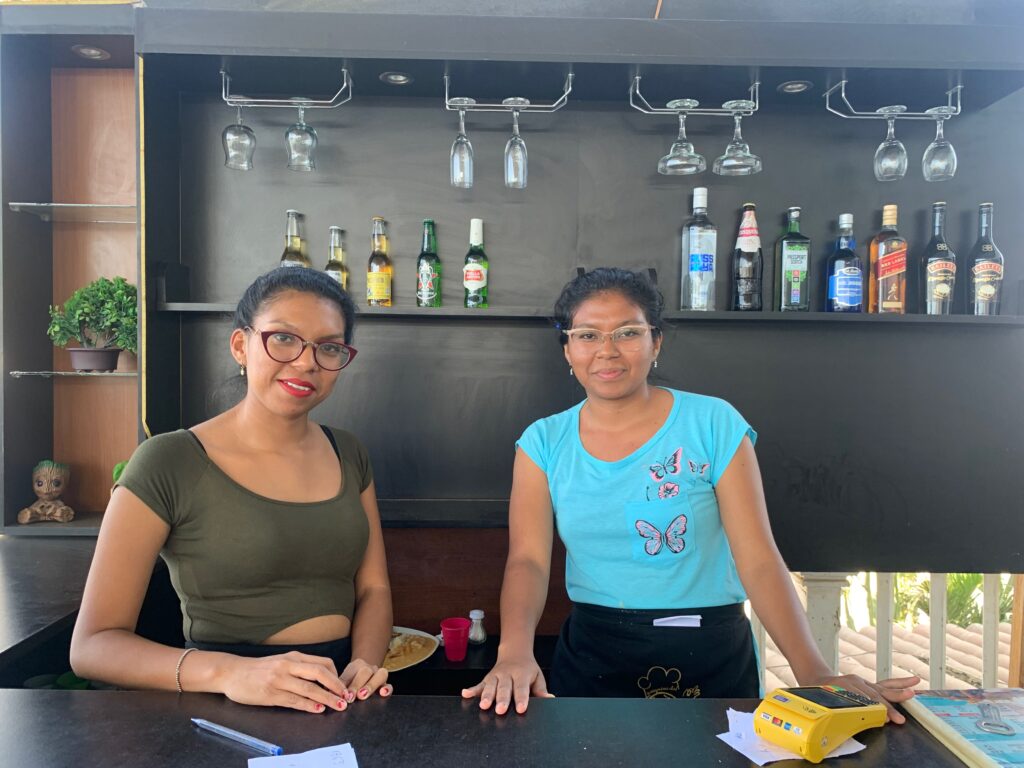 The Club Liberal… its shambolic and faded elegance, restaurant terrace run by Zaida and Zarella.

Around the corner at night, back beyond the old customs house, I see great activity. By now it is dark and arc lights have lit up a modern quayside and what is obviously something of a fish market and transport depot. A large number of the fishing boats are landing their catches, which are being loaded into a posse of large trucks and driven off. Down below in the fishing boats tied up against the quay, men fill fish boxes from the holds of the trawlers. Other men with grappling hooks then hoick them onto the quayside where the contents are weighed and noted. Sometimes the boxes are just stacked, sometimes they are abruptly shoved this way or that, for dealing with later.

Great drama surrounded one part of the catch — the giant squids; huge, enormous animals whose bodies that appear to be the size of an Armenian weight lifter’s thigh. Trays of the creatures are emptied into large but shallow stainless steel troughs into which hoses pump water, which pours over the sides of the troughs and onto the ground. Men in long plastic aprons and large white wellington boots wash the squids by sloshing them around in water before throwing them individually back into the plastic boxes as other men, often boys actually, shovel ice on top of them. Its then into the trucks — huge trucks, articulated lorries or those big rigid flatbed trucks with refrigerators in them. Men on the back of the trucks stack the iced-over boxes until they fill the space, floor to ceiling and then, without hesitation, the doors are slammed shut and they’re off — off from the quayside and depot, out through the steel gates and into the clamour and chaos of the night streets and then away. . . but to where? I asked one of them men. 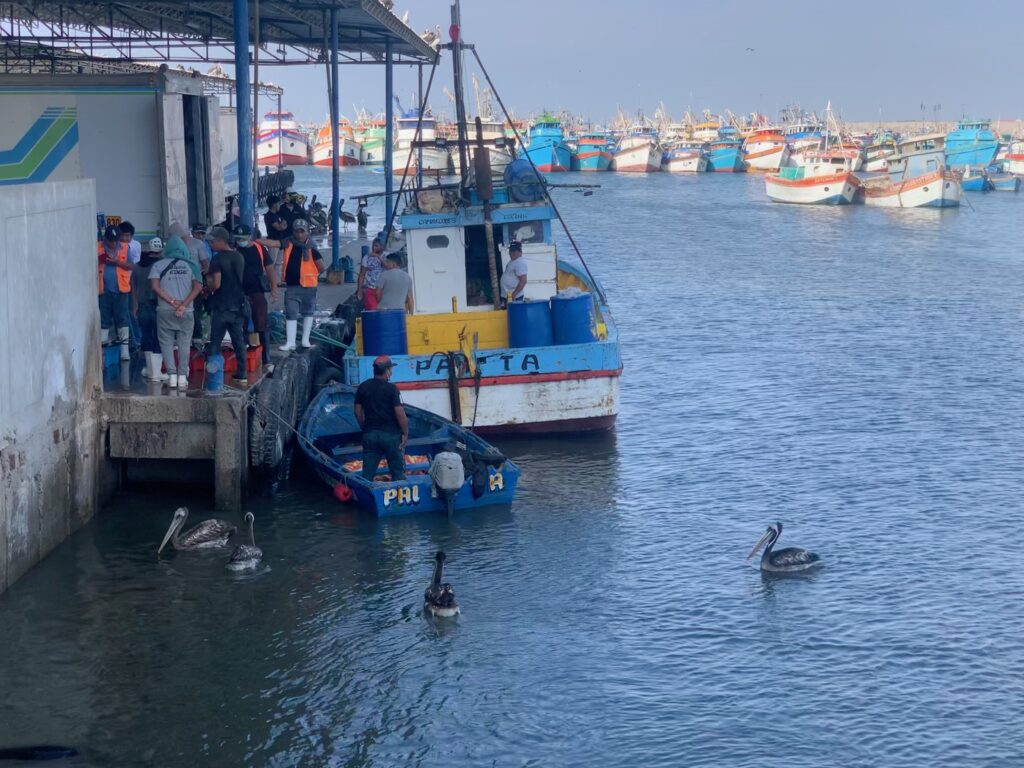 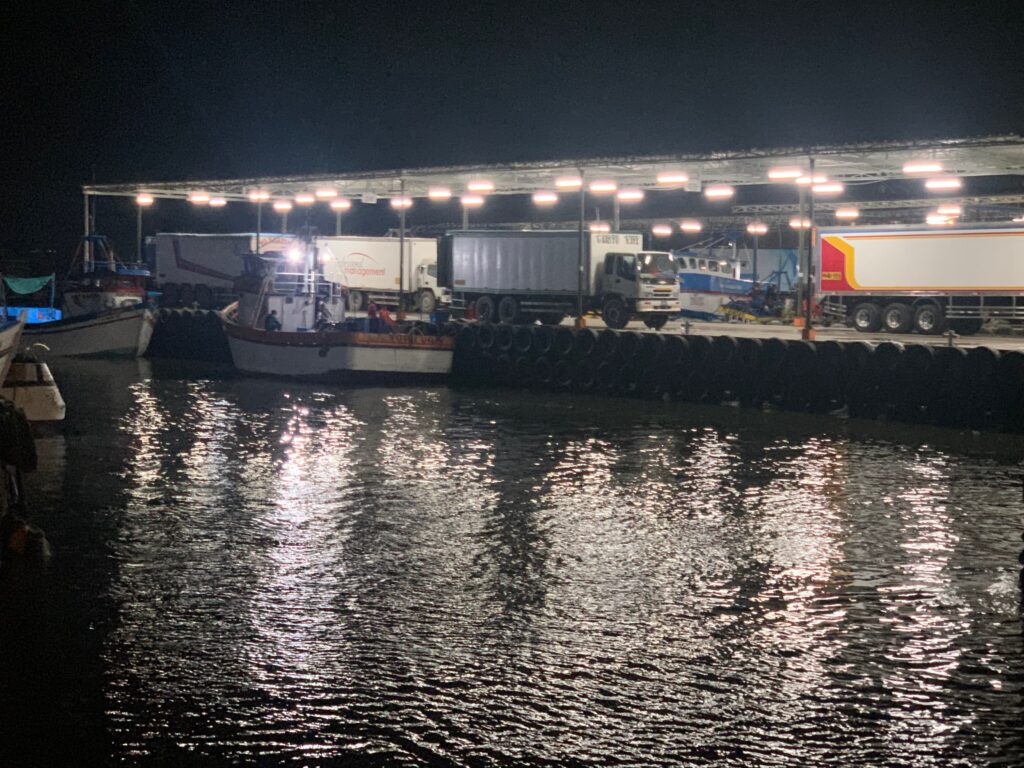 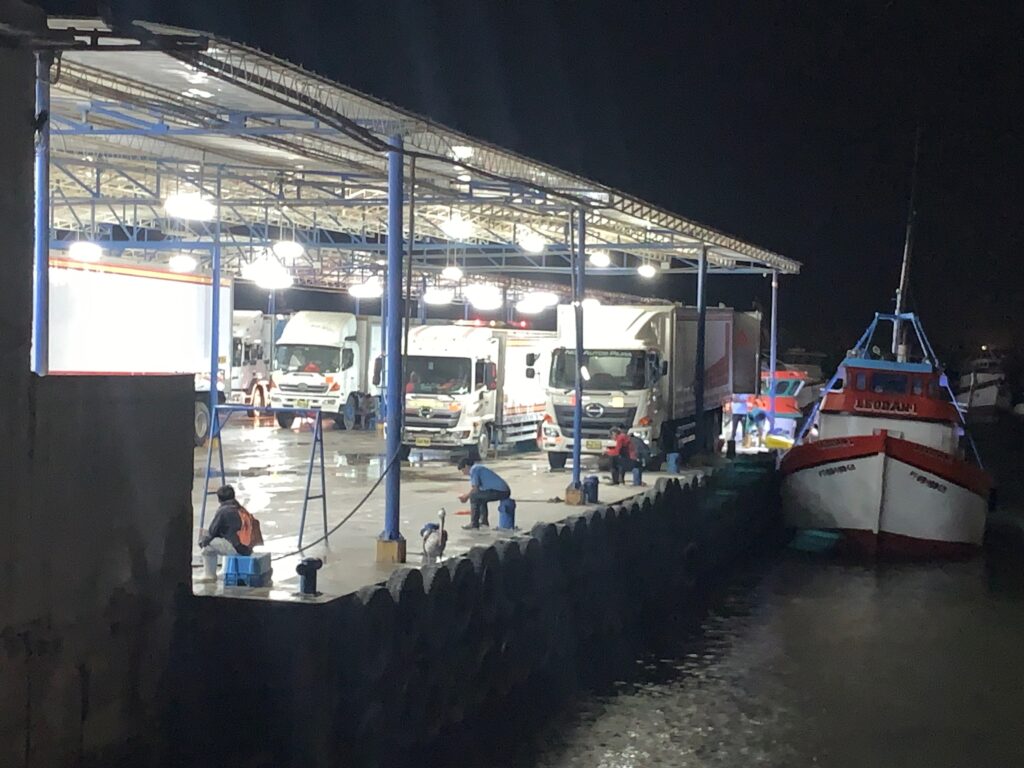 Pelicans lurking, hoping for shambles; the port at night, this one a quiet night.

All around, there were pelicans and sea lions waiting for shambles to fall their way. And the noise, the clatter of boxes, of ice shovels and hoses washing down the concrete as the trucks pulled out . . . It was a great sight, a really great sight of urgent hard work, of getting the job done in the middle of the night, of colour and drama, of everybody knowing what to do and doing it. I was raging that I did not have my camera, which had run out of battery. And when I returned next night, it was much calmer but I was unable to slip inside past the security guard. No, I could not go in, was the firm response to my pleadings.

That night, there was a festival in honour of San Sabastian and the fishing families, who all lived in fairly run-down, basic conditions around the harbour . There was much drinking and dancing and ribaldry, and letting off fireworks. Wandering back to the hostel, I noticed a prostitute in the portico of the long disused church. The sight of her there, all tarty and wearing a black Covid facemask, vulnerable in amongst the mess and debris of the half wrecked church and its dodgy spire, was just overwhelmingly miserable.