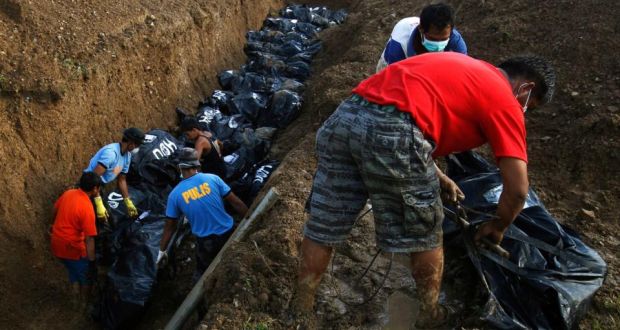 There’s not much dignity when the end is a body bag put into a mass grave, without a marking and without loved ones present. In Tacloban yesterday some 200 victims of the typhoon and tsunami-like wave that obliterated much of this central Philippines city were buried in a mass grave just outside the city.

It was a harrowing sight. Senior inspector Mariano Tuguam of the Bureau of Fire Protection, which has taken a lead role in gathering the bodies, displayed quiet determination in the face of duty. “We will finish this so Tacloban city can stand up again,” he said.

The day began with a message of hope. Standing before his congregation in the partially wrecked and almost roofless church of Santo Nino, Msgr Alex Opiniano came across as a man of warmth, empathy and love. He spoke mainly in his native language, Tagalog, but, in the manner common throughout the region, occasionally and seamlessly slipped into English and then out again. Addressing the faithful, he said: “God is good.” He then added, with emphasis: “All the time.”

Valley of darkness
The congregation of about 200, some of whom were wearing surgical face masks, listened intently and without any hint of dissent. The Mass began with a reading of names.

“There is no sense in asking why,” said Msgr Opiniano. “This situation leads us to think more deeply about life. We have an opportunity to contemplate on the essentials of life.”

He finished by quoting Psalm 23. “Even though I walk through the valley of darkness, I fear no evil for You are with me.” He added: “There has to be a morning after. We hold on to Him and we hold on to each other.”

The church of Santo Nino is a substantial concrete structure almost on the water’s edge. Like many concrete buildings in downtown Tacloban it fared quite well when the typhoon struck compared with the wooden shanty homes and shops.

The side aisles of the substantial building are open to the outside world, separated only by wrought-iron gates, allowing cooling breezes through the interior. But they also allowed in the surge of water. An elaborate wall-mounted altarpiece in the sea-facing south transept depicting Mary was swept away and now lies smashed outside the building.

The main altarpiece with the child Jesus survived untouched, as did the north transept matching altarpiece with its statue of Joseph. But much of the roof did not and now shredded pieces of plywood dangle above the congregation. The roof of the bell tower is likewise gone but the bell survived intact and was used to announce 7am Mass.

Holy mess
In the gutter of the main roof below the bell tower, balanced precariously like a slice of bread in a toast rack, a large piece of a stained-glass window, blown clear over the roof from a lancet window in the south transept, sees Christ and the Holy Spirit peering down on the holy mess below.

In the sacristy after Mass, Msgr Opiniano asked me had I had breakfast and would I like some coffee. I was fine, I said, thanking him. The death toll in his parish was 800, he said.

“We hardly have been able to account for those that we know. Bits of information have come in but we haven’t got the big picture yet.”

There would be funeral rites later in the morning during a mass burial, he told me. It would be at Tacloban North Cemetery, a short distance out of town, at 10am.

The way to the cemetery passes yet another pulverised shanty town, Tigbao, before winding its way up a small valley, whose sides have been stripped bare by the wind, maimed tree stumps being the only indication of the growth that was there.

On the road outside the graveyard, 24 body bags were laid out in a line, their putrid contents bloated with decomposition. Inside the graveyard another eight lay on the grass. A mechanical digger had excavated a pit about 100m long by 3m wide. A huge mound of clay on one side indicated the depth to which it had been dug, about 2.5m by my estimation peering in. Already inside were many, many bodies, each in a bag – some white and supplied by the Philippine Red Cross, some olive from the military, but most the black ones supplied by the Philippine department of health.

A lorry piled high with more bodies drew up. Policemen wearing face masks, in a bid to dull the stench, and surgical gloves began to haul out the bodies one by one and lay them on the road.

Numbers of dead
I counted 83 corpses. Before the task of putting them into the pit had begun, another lorry, this time a military vehicle, drew up filled almost to overflowing.

I did not wait to count as each body bag was lifted out but at a guess there were at least another 80 – a tally close to 200 on top of those already in the pit; 210 put in on Friday, 320 on Saturday.

Once the bodies were laid on the road it was the duty of the firemen to carry them in. Four of them, each taking a corner strap, would walk slowly to their pit. They tried to lay them out neatly. The pit was divided into quadrants, two of which had bodies piled four high, one on top of the other, each bag numbered, indicating where they had been found.

The authorities say they have a description of each of the dead so that if a positive identification can be made matching a person in a bag, they may be exhumed for family burial. Exhumations seem improbable as there was no obvious record being kept as to where in the pit any one bag was being laid.

Eighty per cent of the bodies are unidentified at the time of burial. At most, relatives of the unknown may learn one day that somewhere in the pit there is their loved one.

Funeral rites
Standing in the road, Msgr Opiniano spoke prayers and funeral rites as each victim was carried in. There were no relatives, no friends or loved ones present, no personal recollections of lives lived and lost. Just the police and fireman who retrieved the bodies and brought them to this grim, final resting place. The only uninvolved observers were journalists and a few locals from the shanty up the road.

Children skipped up and down the road past the body bags, some carrying balloons, chatting amiably to anyone returning their smile.