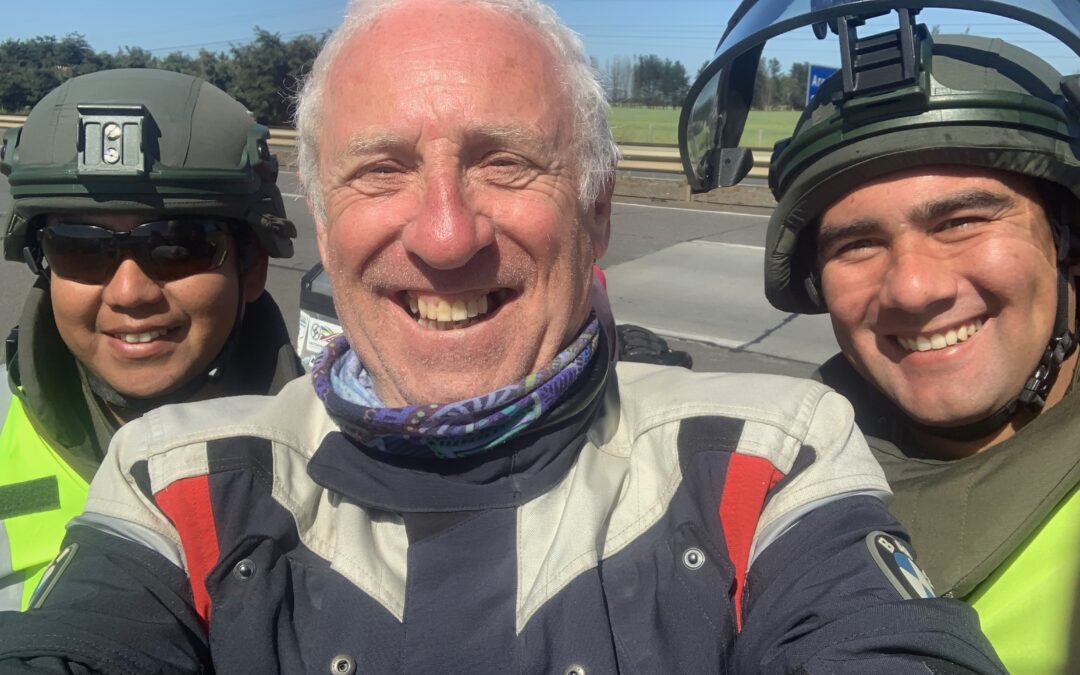 I had my first Tip2Top cop encounter yesterday — two of them in fact in quick succession.

I was heading north along Ruta 5, the main transport spine that runs north/south the length of the country, ending in the north only when it hits the Peruvian border, and in the south when the Andes and the Patagonian ice fields get in the way, forcing it to terminate at the bottom of Chiloé Island. The R5 is an excellent road — mostly dual carriageway, sometimes to motorway standards.

Anyway. I’m trundling along it, north of Lautaro, when I see about a km up the road, the dull green and white of a vehicle belonging to the Carabineros de Chile, as the national police force is called. Before on this trip, they had waved me through random road checks but not this time: hand up and that gesture to the hard shoulder and so, naturally, I complied.

There was never any doubt (at least in my mind) that everything would be OK. While many people back home feel all police in Latin America are on the take and not to be trusted, that is absolutely not the case in Chile. Nonetheless, I deployed advice received, and which is very much what I would have done anyway. Ken McGreevy, a very experienced biker pal from Malahide, and a guard to boot, said first thing to do when stopped anywhere on this trip is remove your sunglasses and then, hand outstretched, engage them in conversation.

Which is exactly what I did — engine off, dismount, helmet and glasses removed, and the nearest I could get to “howya lads” in Chilean Spanish, and we were off!

Two terrific guys — Sergeant (2nd class) Manuel Mariquero Licanpueo and Corporal (first class) Oscar Sepulveda Navaro — were fully decked out in the force’s paramilitary garb, including military-standard helmets and body armour. But there was nothing intimidating about them at all — quite the opposite. They were full of friendly questions about me. Where was I from, where was I going? Did I ride all the way from Ireland?

And so we veered off into a chat about biking and Alaska and all that jazz. And while they were really interested in the bike, they were also very professional. Very early on, I offered them my passport for scrutiny, which was accepted; then my driving licence. Sgt Manuel (he’s the one with the shades) asked to see the papers for the bike, which he duly inspected, and I also showed him my insurance, which he seemed to appreciate.

There was some chatter on the radio and I’m not sure if it related to me but, in any event, if it was, there was clearly nothing on file to warrant any action. Manuel pointed to Oscar’s sub-aqua unit badge insignia and I told them, as best I could, what I was at. They returned all my papers and there was further chat.

“Soy periodista,” I said. I am a journalist and it’s the most complete, and I believe grammatically accurate, sentence that I can recall from my brief course at the Cerventes Institute in Dublin three years ago! “Y escribo mi viaje” which would not have earned any brownie points back then but does communicate out here that I am also writing about my trip. “Para uno book,” I add rather pathetically.

Could I take their photo? I asked. They responded by saying yes, but let’s have a selfie with the three of us and, more than that, as I drove off, after handshakes, best wishes and embraces, they filmed me and sent it to me on WhatsApp.

ps: the second encounter about an hour further along the highway was just as relaxed and almost as friendly.