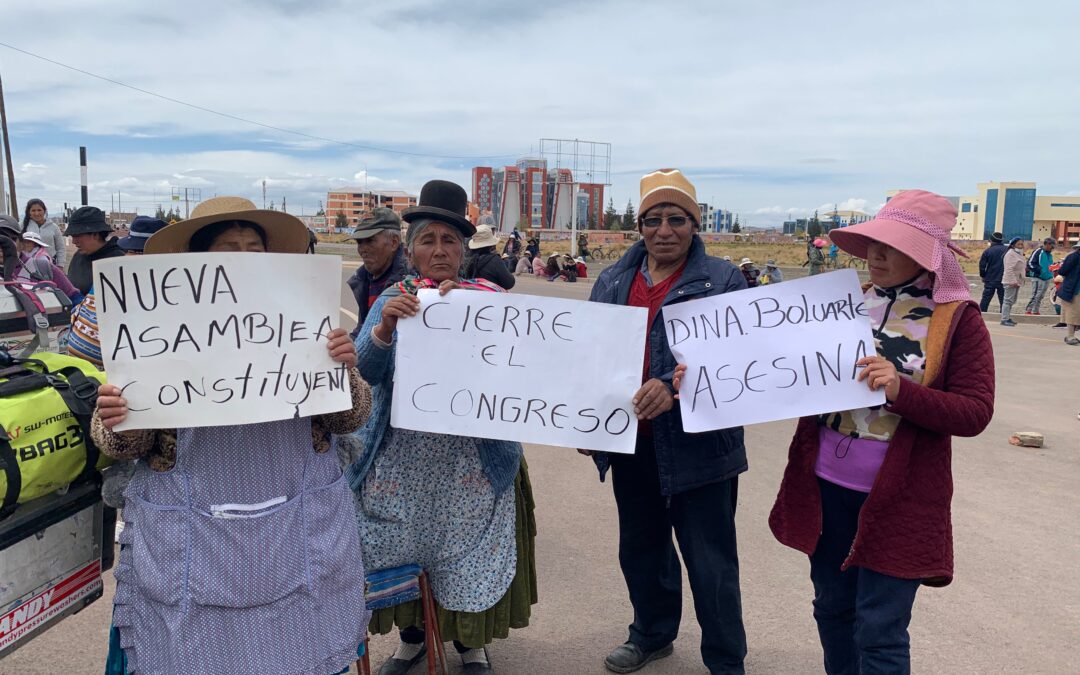 Hundreds of trucks are lined up on the road out of Puquio, a medium-sized town in south central Peru, home to some 15,000 people. The line of vehicles snakes back into the town, right back into the center where the streets are clogged with huge Freightliner, Mack and Volvo trucks that dwarf many of the buildings around them.

Outside of the town on the road in, the story is the same. Bumper to bumper, the trucks are lined along one side of the road, that twists this way and that as it rises out of the valley in which Puquio sits.

It’s been like that since Tuesday. No way in and no way out. No one can move and, unless something gives, no one is going to move. 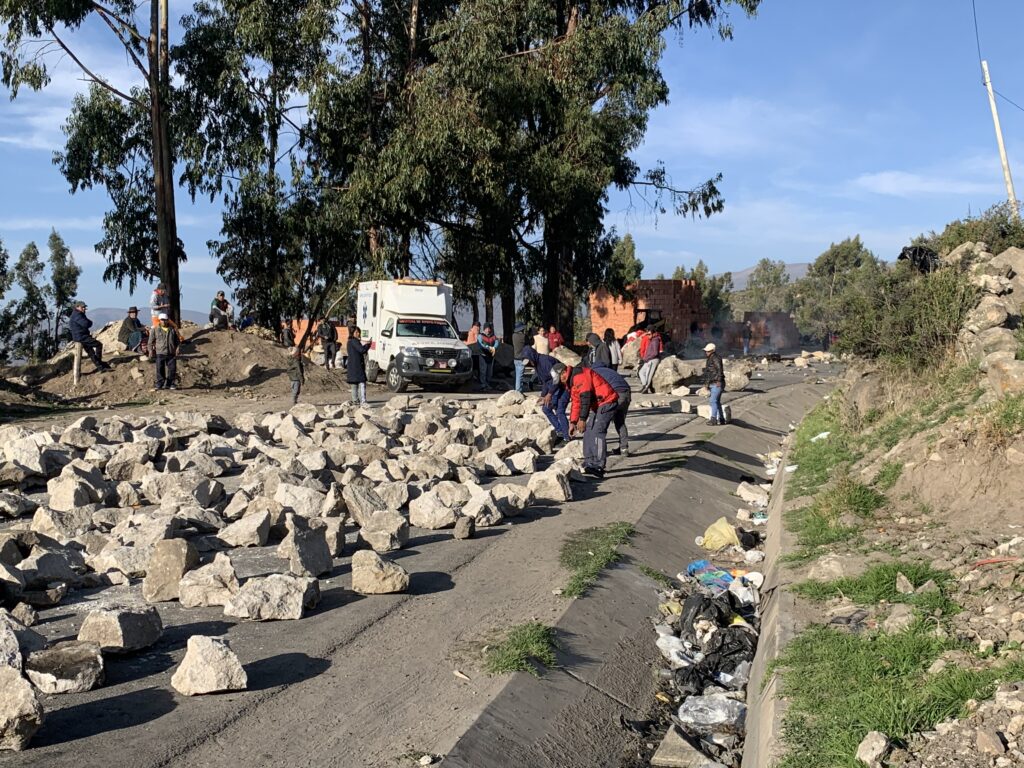 Protesters clearing the way for an ambulance at the road block at Puquio; eventually they let me through too.

In between the two lines of trapped vehicles is a horrendous mess: about 100 meters of the road is covered in rocks, boulders, bits of wood and metal, and what remains when old lorry tyres are set on fire — mounds of dirty black silt and tangles of wire. Standing around are the protesters, men mostly, disheveled and poor looking. Like almost all the protesters I have met over the past week or so, they are evidently of little means.

At the makeshift road block in Puquio, some of the protesters are standing on a hillock where the road bends. They observe and shout to the others below whenever anything seems to be inching forward to try to break the blockade. There are no posters here expressing what it is they are protesting, and there are no national flags, which have attended each of the road block protests I have seen. But the mood is clear enough.

“The people are angry,” a young woman tells me. She seems to have a position of some standing with the others but is reluctant to accept a leadership role.

“Esta una commandante?” I ask in my appalling Spanglish.

The people, the angry people, are in charge and speaking with one voice, it seems. And there’s an amount of anecdotal evidence to support the notion of a popular uprising, in pockets around the south and south-central areas of Peru, however effective the revolt turns out to be.

The crisis currently engulfing the country goes back to the June 2021 presidential election run-off. It was won on the slimmest of margins — 50.13 per cent — by Pedro Castillo. He is a former primary school teacher and trade union organiser and stood for the Free Peru party, which has a Marxist ideology, although Castillo himself is personally socially conservative.

In Peru, the president has executive powers to appoint and run the government but Congress (parliament) has a break on presidential overreach. It remained politically conservative after the election and was implacably opposed to Castillo.

In six months, Castillo appointed four separate governments, unprecedented in Peruvian history. Last December, and after several attempts, Congress impeached him after he declared he would sack all of them, write a new constitution and, in the meantime, rule by decree. He is now in jail and his former vice president, Dina Boluarle, has taken over as president.

Castillo’s supporters in the southern part of the country, where his slim electoral mandate was strongest, erupted in protest, blocking roads, attacking government buildings and destroying State infrastructure, such as road toll booths.

After a Christmas pause, the protests resumed on January 4th, the day after I entered the country from Bolivia, travelling by motorbike to Puno, on the shore of Lake Titicaca, which then was calm. However, further on at Juliaca, a city of over 270,000 people, where the highway to Cusco runs directly through the center of the city, the road blockage was total. 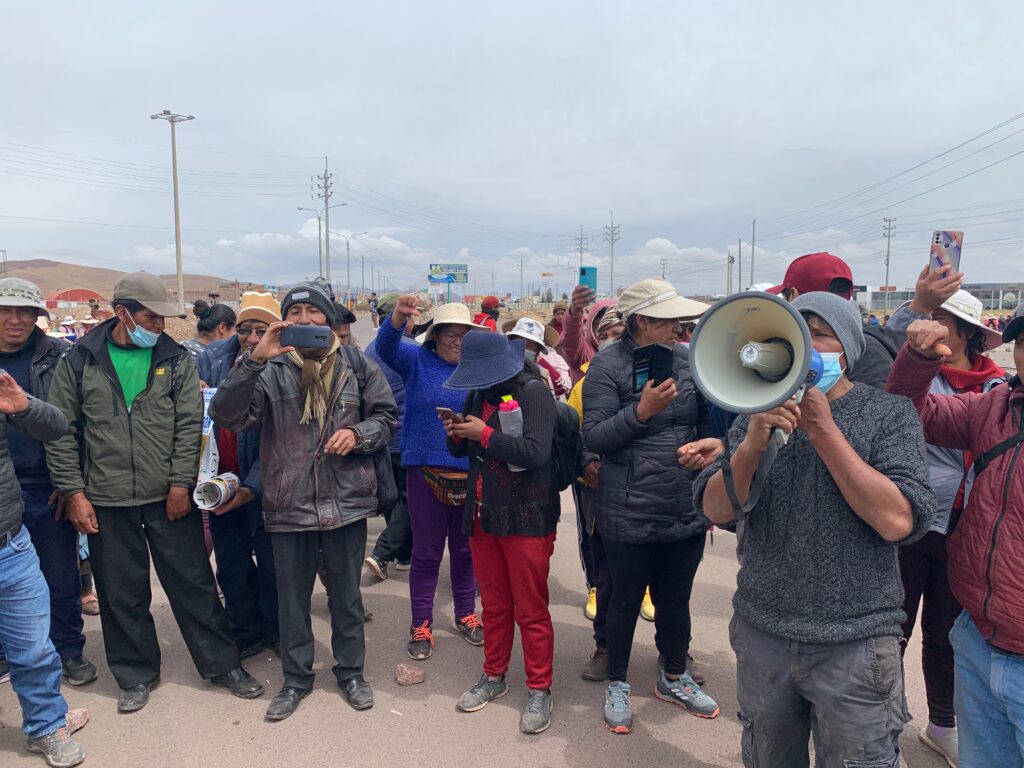 The roundabout protesters at Juliaca, as I first met them.

Thousands of people were on the streets when I approached a major roundabout on the outskirts of the city with caution. Protesters became agitated, shouting and gesturing I could not get through. Some picked up rocks.

I stopped, dismounted, took off my helmet and spoke to them.

“Soy periodista,” I am a journalist, I said, showing my press card and passport.

There followed a somewhat surreal situation in which I was handed a bull horn to address the crowd. In what can only have been Spanish far, far below primary school level, I told them who I was, what I was doing (travelling to Alaska) and asked them to tell me why they were protesting.

I fear much went missing in translation but not their warmth and appreciation of my interest in them. They spoke castilliano (they did not say Spanish) and quechua, the indigenous language of the Peruvian Andes. They carried handwritten posters demanding Congress was closed, new elections held, and a new constitution drafted. They referred to now President Boluarle as an assassin.

After my few words, there were cheers, photographs and cries of “Viva Peru!” and “Viva la Prensa!” There were chants of El pueblo, unita . . . and anyone who has even been on a leftist demonstration knows the rest — “will never be defeated”. There may even have been a clenched fist or two raised in revolutionary solidarity. I may even have indulged in the moment myself. At one stage, one of the women asked me to pose with her and to hold her poster. I obliged willingly — somewhere in Juliaca there are smart phones with the incriminating evidence..

Pasar, pasar, they said and, amid hugs and handshakes, waved me on my way. And so the scene was repeated every 50 or so meters along the highway for perhaps a kilometer, as I threaded my way gingerly through glass and wire, around boulders and over mounds of clay and rubble. Occasional threats to ram nails into my tyres were subdued with conversation and my insistence of “Soy periodista, soy periodista!”. I saw one young woman out of the corner of my eye pick up a rock. I looked straight back at her and said No — Soy tu amigo, Soy periodista! She looked down and dropped the stone. Similar admonitions, mixed with expressions of friendship, worked with the nail ladies. I’m not sure what to make of it but the only people who actually threatened me, and then, truth be told, not terribly seriously, were women. The men on the barricades seemed much more laid back.

Eventually, one protester showed me to a parallel back route through the city and so I progressed. From Juliaca on, the pattern of protest and road blockage repeated itself, though with decreasing intensity as one neared Cusao. 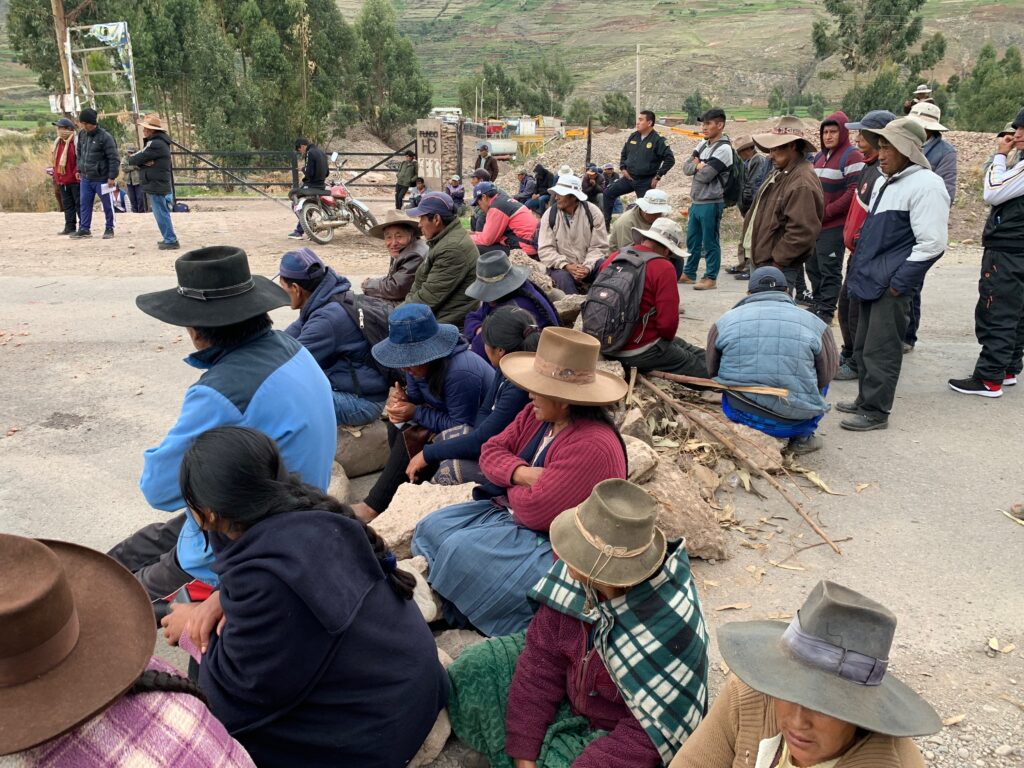 Not so much the dispossessed as the never-possessed-it-in-the-first-place. All the protesters looked poor.

Another pattern was apparent: the protests and road blockages were most evident where the road passed through what appeared to me to be disadvantaged communities and where the people looked poorest. They feel disenfranchised by Castillo’s impeachment and jailing, and generally excluded from mainstream Peruvian society. They are not so much the dispossessed as the never-possessed-it-in-the-first-place, and they know it. They are contemptuous of Congress which they call corrupt — a mantra repeated everywhere.

And so, day after day across south central Peru, the people of the little streets are hurling themselves onto the great ones and blocking them. But the results are unpredictable. In Juliaca, where I have no doubt there was widespread support for the protest I saw, based on the sheer number of people out on the streets, last Monday night 17 people died in clashes with the police.

According to the prime minister, Alberto Otarola, protesters attacked a police car, beat and handcuffed one officer and set fire to the vehicle, burning the other officer to death. “We call for peace. We cannot murder one another,” he said, according to the local news agency, Andina.

TV footage showed injured protesters being taken to hospital. Reports said some had gunshot wounds and that the police car was set alight after shots were fired. The only people known to have been armed in the situation were the police.

Outside of the Andean south of the country, Peru seems calm and normal. Overnight, on Wednesday, however, a civilian was shot dead in Cusco, bringing the death toll since the crisis erupted in December to 48.

Puquio is on route 30A, the main road that links Peru’s ancient capital and much of the rest of the country remains blockaded. A curfew has been imposed on Puno and the weekend looms.

At Puquio, the women who spoke to me before the protesters again let me through, said that Congress was dominated by business interests — “el Congreso está dirigido por empresas” — and that those in power in Lima saw them as terrorists.

I saw no terrorists but many people who were poor, angry and highly politicised.

*A slightly trimmed version of this was published first in The Irish Times, January 14th