Random encounters: the joy of travel 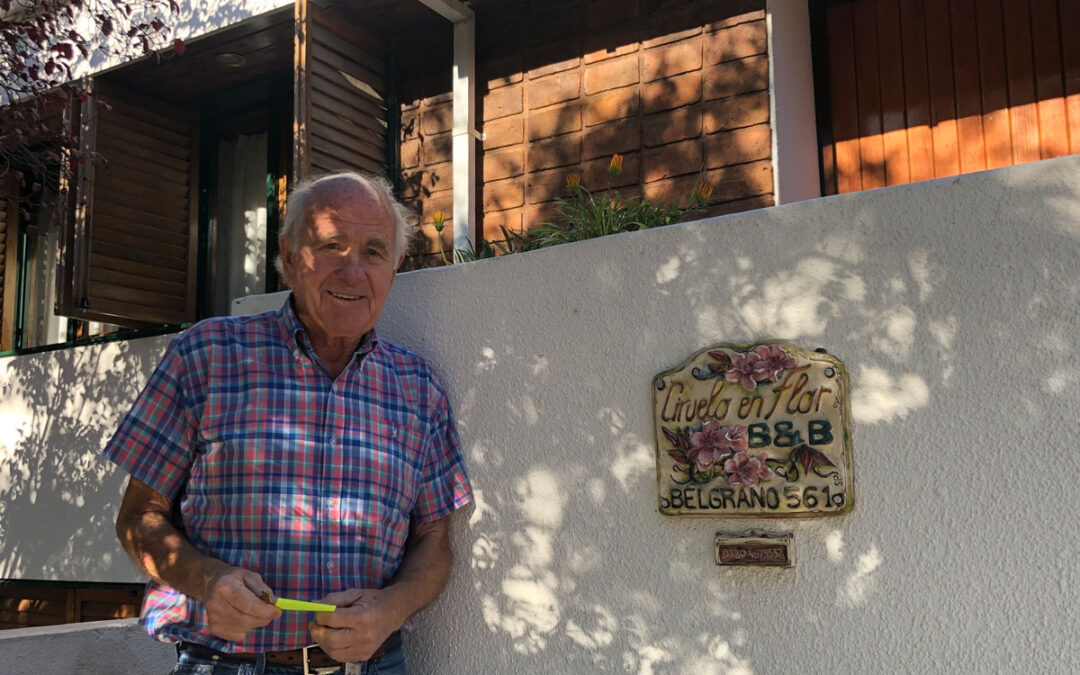 My journey south from Buenos Aires is barely a few days old when two unconnected incidents reinforce why I adore travel and the random incidents that make it such a joy.

Hot, sweaty and tired, the bike and me slide into Trelew, a largish city of some 100,000 people on Argentina’s Atlantic coast but deep nonetheless into the Patagonian Desert. I’m sticky after a gruelling three and a half hour, 312km ride from Las Grutas. The desert was unrelenting: flat and dusty, with acres of stunted gnarled bushes under a vast blue sky, broken only by whisps of cirrus cloud. The most interesting features were the derelict petrol stations and a dead guanaco, one of the many llama-like creatures than roam the plain but this one didn’t move fast enough to escape an approaching vehicle. And there were clusters too of Darwin’s rhea, the small ostrich-like, flightless birds that also roam, in groups of anything up to a dozen or so.

So Trelew was welcome, the more so when I knocked on the door of Belgrano 561, a B+B named Ciruelo en flor (plumb blossom). The door was opened with something of a flourish and I am invited in warmly and with enthusiasm. The compact, single storey over basement house is a delight: polished wooden floors, whitewashed walls and furnished and decorated with restrained style.

FJ gives me the keys to his garage where I park the bike and drag my various bags into the house. He shows me to my little basement room and bathroom, gives me an ice cold bottle of water, the keys to the house and disappears. I go wandering up town and happen upon a super cool bar named Jyglo. It’s an industrial retro kind of place, all galvanised corrugated walls, polished metal and wood tables, and wooden pallets mounted on wheels used as room dividers. The speakers are belting out Dire Straits and Fleetwood Mac and, best of all, they serve no fewer than 10 beers which, as far as I can tell, they make themselves. I get comfortable and watch a sudden, angry wind whip up leaves, litter, sand and dust and turn the street outside into an opaque mess. A beer, some Malbec and a fat burger and I’m off to bed.

Next morning FJ is in flying form. I arrive in his little kitchen for breakfast and there he is: bright as a button and sporting a black floppy chef’s hat and a cardinal red kitchen apron with a Welsh dragon on the front. From a CD player, a Welsh choir, supported by what sounds like a very substantial cathedral organ, is belting out sacred hymns. The wonderful, spine tingling sound of Blaenwern (Love Divine All Loves Excelling) and Cwm Rhondda (Guide me, Oh Thou Great Redeemer, also known as Bread of Heaven) fills the house and makes Franklin John very, very happy.

“I love this!” he says, clearly delighted that I too have an unquenchable, emotional fondness for massed choirs singing sacred hymns but it wasn’t quite what I expected to hear in a Patagonian Desert town! And all the better for it.

Franklin John Humphreys is aged 77 but he could be 57 for the brightness of his blue/grey eyes, his easy smile and his warm and engaging personality. His grandfather came to Argentina, aged just six, from Blaenau Ffestiniog in north Wales in the 1850s, the child’s father having worked there in a slate quarry. They wanted a better life. “They were slaves of the Anglo-Saxons,” says Franklin John. “Our parents are Celtic and the freedom is very important for the Celtic people.” His own parents were farmers, working land close to Trelew, a town whose growth was linked to Welsh settlement in Argentina, wool production from sheep and the development also of the rail system.

“I was born on the farm and grew up on it,” he says. “We had some cows and grew alfalfa. In those days, we went everywhere by horse.”

Franklin John became an architect, a profession from which he formally retired just three years ago, though in the garage, he is still working on a set of drawings for a friend named Hughes.

Franklin John’s own house, designed and built by him 45 years ago, has aged as well as he has. It is filled with treasured heirlooms – stirrups and other items from the old farm, including a small beam of ancient wood. Franklin John lost his wife 35 years ago. “She smoked heavy and. . .” he taps his chest to suggest lung cancer. “I got no other wife but not to say I didn’t have girlfriends,” he says with an impish smile. I’d say there was a queue.

We talked about Ireland, about Brexit (he was very well informed) and his daughter, Carolina, who I met, and a son, Henrique, who lives and works in electronics in Norwich, England, the world capital of the tiny-stickers-on-fruit industry, which I did not know.

I could have stayed chatting to Franklin John for hours but the road beckoned. We said our goodbyes, embraced spontaneously and took photographs. A lovelier, more gentle and engaging man would be hard to find.

The road south from Trelew is another numbing, straight as an arrow thrust across the desert, this time with buffeting winds coming from the west. The bike shows a rapidly diminishing supply of petrol (down to about 20 miles to empty) and I’m getting worried when a station appears on the horizon in a place named Uzcuddun. It’s nothing more than a forecourt with half a dozen pumps and a mouldy, run down looking café whose windows are almost entirely covered in biker stickers. There are about a dozen riders hanging about, fascinating themselves over the details of each other’s machines (as is their wont) when the arrival of mine causes a bit of a flurry.

I go in to the rundown café where there’s a reassuring anti-virus gel dispenser on the counter and get coffee and a slice of pizza. Just then, a small man with a barrel chest, buttoned up biker jacket and a bandana comes in from the forecourt and walks over to me with a great sense of purpose.

“My friend,” he says with a certain formality, which can mean a conversation is about to go one of two ways. “I have work with many of your countrymen. Very fine people.” And he shakes my hand in a manner that suggests respect and gratitude to me personally, as the representative in situ of the entire Irish nation. “I work with them in Cyprus.”

Oh, I say, doing what? Tell me more! Bandana man is Fernando Lopez and he’s with his partner, Elena Moreno. They’re doing a big, around Patagonia bike tour. So, what about Cyprus? I ask. Fernando explains that he has both military and police training and, for a time in 2006 and 2007, was seconded to United Nations police duty in Cyprus.

“I work with garda,” he says of his time there. Fernando now has my total, undivided attention. He continues: “Great man. Cyril Finney. He was my station commander. Really great man.”

Do you know where he lived in Ireland?

Now, as the crow flies, I am 12,107 kms from my home in Greystones, Co Wicklow, Ireland, standing in the middle of the Patagonian Desert talking to a bloke wearing a bandana who’s telling me about Garda Cyril Finney from Greystones.

It is, I confirm, a very lovely place.

And so, Fernando tells me about himself, about his tour and his biker club and how they do things for disadvantaged children. And a little further down the road, when I and my bike fall over in some mud, me trying to take a photograph of a penguin poster in the desert, passing Bandana man stops and helps me pick it up.

I don’t know Garda Cyril Finney but garda, you’ve got a big fan rattling about the Patagonian Desert who remembers you with great fondness.

You really couldn’t make this stuff up…