Sometimes, you have to just stand in silence and gaze in awe 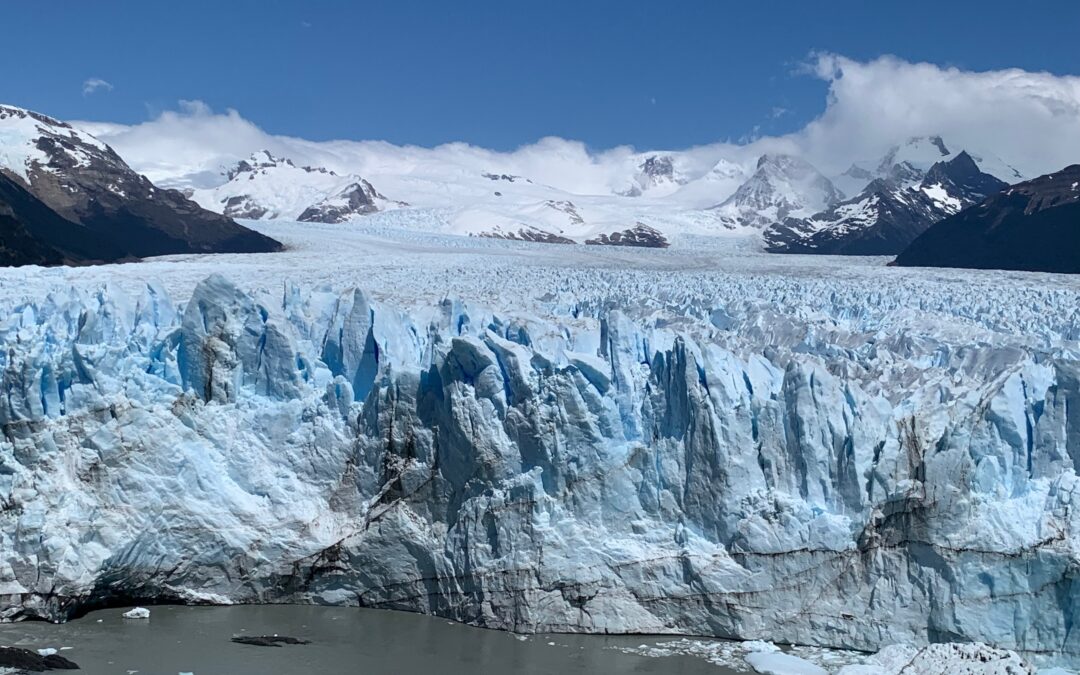 I got back to Punta Arenas from Puerto Williams at around midnight and, unlike at Puerto Williams, the ferry crew would not allow passengers without accommodation in the town sleep the night on the boat. I settled down instead on the ferry terminal building floor . . . alone, in full biker gear, minus the helmet and, surprisingly, got some sleep.

At 5.15am, the sun, not yet quite over the horizon, is nonetheless brightening the sky and it’s time to start the trek north. The 250 kilometres road to Puerto Natales is empty — not even a guanaco in sight — and the wind only slight.

The guanaco, first cousin to the llama, is ubiquitous in Patagonia, especially to the east of the Andes and right across the Patagonian desert steppe to the Atlantic. An attractive looking animal with its brushed-rusty brown coat and pert tail, it is, however, spectacularly thick as well as being rather shy. This does not discourage it, however, from gathering in large numbers beside busy roads. Whenever a vehicle approaches, your average guanaco will look up and start fretting. Despite their being 500 million hectares of desert scrub on either side of the highway, the guanaco will observe the approaching vehicle and, taking decisive action to get away from it, will run straight onto the road in front of it.

For this reason, guanaco corpses are not uncommon sights, distressing as they are for all concerned, save for the grateful birds of prey and insects whose work ensures that very soon all that is left of the late guanaco is an empty hide flapping in the wind and bones rapidly bleached white in the sun.

Plenty of guanaco watching later on but not for now. And no sign either of the flock of flamingos I observed at a lake last time I passed this way — but that was March and this in late November.

By the time I get to Puerto Natales, breakfast is calling and the wind has whipped up. The town, one of the main set-off ports for vessels touring the many islands on Chile’s west coast and venturing as far as Antarctica, is flat, weather-beaten and rather dull looking. It too has a frontier feel about it but the most abiding feature is, without doubt, the wind, which is churning up the sea and battering everything in its path.

The westerlies blow in from the Pacific, whipping around Cape Horn, as well as over the Andes. As they cross the mountain range, moisture is released as rain and snow so that, by the time the wind swoops down and onto the Patagonian steppe, it is bone dry but fierce in its intensity. Throughout the spring and into the summer, the wind speed increases to, at times, 120 km/h. 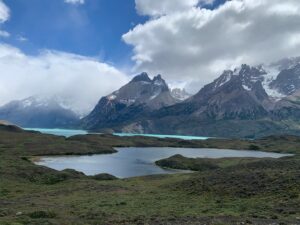 It felt like that on the road out to Torres del Paines, the Chilean national park that has become a mecca for hikers because of its striking granite peaks (the towers) and glaciers that feed a series of lakes and rivers, one of them the river paine. The park is 181,400 hectares in size and attracts a quarter of a million visitors a year, half of them foreigners who pay a premium surcharge compared to Chilean visitors.

They included a busload of oriental people for whom I was far more interesting, or so it seemed, than the Cordiellera del Paine mountain range rising above Lago Nordenskjol, at which we were all, at least initially, gazing. The Cordiellera is the star of this place. I baulk when I hear Americans describing a half decent cup of coffee as “awesome”. But the mountains here truly are awesome in the sense that they inspire awe in those who gaze upon them.  It’s not just the middle earth, Tolkien-esque appearance they have — black, brooding and snow-capped. It is their massive bulk, their scale and imposing presence, as opposed to their mere size.

The tallest is only 2,884 meters above sea level; by contrast, the Matterhorn is 4,478m. So it’s not size per se — it is scale and the sense that, when standing even hundreds of feet away from them, one is in the presence of something truly massive. It’s all a little overwhelming. 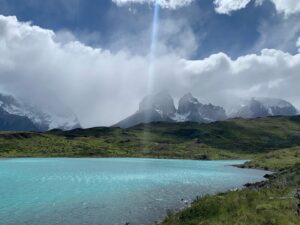 The lakes — Nordenskjol, Pehoe and, nearby, glacier-fed Grey — and are a striking azure blue. Their beauty appears somehow unreal but there they are, one after another, right in front of you. Rivers flowing off the snow-topped mountains, or from glaciers, have a blue-grey colour; add to that the effect of a clear blue sky, and all the waters become a pure painted blue.

I ride on and later, cross the frontier into Argentina, and head for El Calafate, taking a slow motion tumble on a gravel road. Thankfully, no injury (to man or bike) but I discover that I do have the strength to upright the machine — which ain’t bad considering my age (69) and its weighs (over 220kg, unloaded). El Calafate is a small resort town, a playground for the country’s well-heeled younger set and for backpackers. The main attraction for me is to see the Perito Mornier Glacier, the largest in the country and the second largest in South America.

It’s unusual in that it is melting and accumulating ice at roughly the same pace and so it classified as stable, in terms of the effects of global warming. It flows out of the South Patagonian Ice Field, which contains an astonishing one third of the planet’s reserves of fresh water. The glacier is 30 kms long, and about three kilometres wide at its mouth, where it is also some 70m tall.

Directly opposite the mouth, on a slope of land facing it, a series of gantry walkways and platforms allows one get to within what seems like touching distance of it. The front nudges into Lago Argentino and slowly but inexorably the iced dies. Every now and then, the silence is broken by a cracking noise, sometimes a thunder-like snap, a sharp splitting of the air. Sometimes it’s more a dull thud, like when a shotgun is discharged in the distance. And with the noise, another giant shard of ice falls into the water, sometimes moving as though in slow motion, the way giant things sometimes seem to — slow  powerful, even in death. 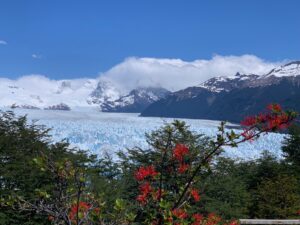 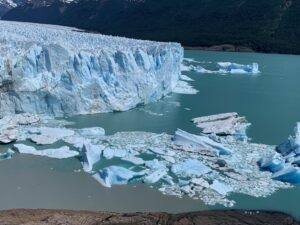 I cannot stand before such a sight except in silence, scanning the details of it and just drinking in what I am seeing.

Back in El Calafate, I camp for the night in a tiny site just off the main drag. A man about my own age wanders over to my tent and introduces himself as Jaime (James). He looks at me, my tent and the bike as though he’s about to cry. He used to ride bikes, he tells me; there’s mention of a Kawasaki.

“But this,” he says looking at mine, while holding both hands to his chest, palms open, before gesturing to the machine itself, “this. . .” 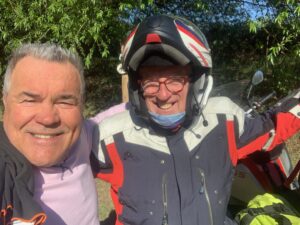 He wants to know where I’m from and where I am going. I tell him and he immediately hugs me, a sort of comfort hug as though I have suffered a great loss.