The Andean rivers are running dry 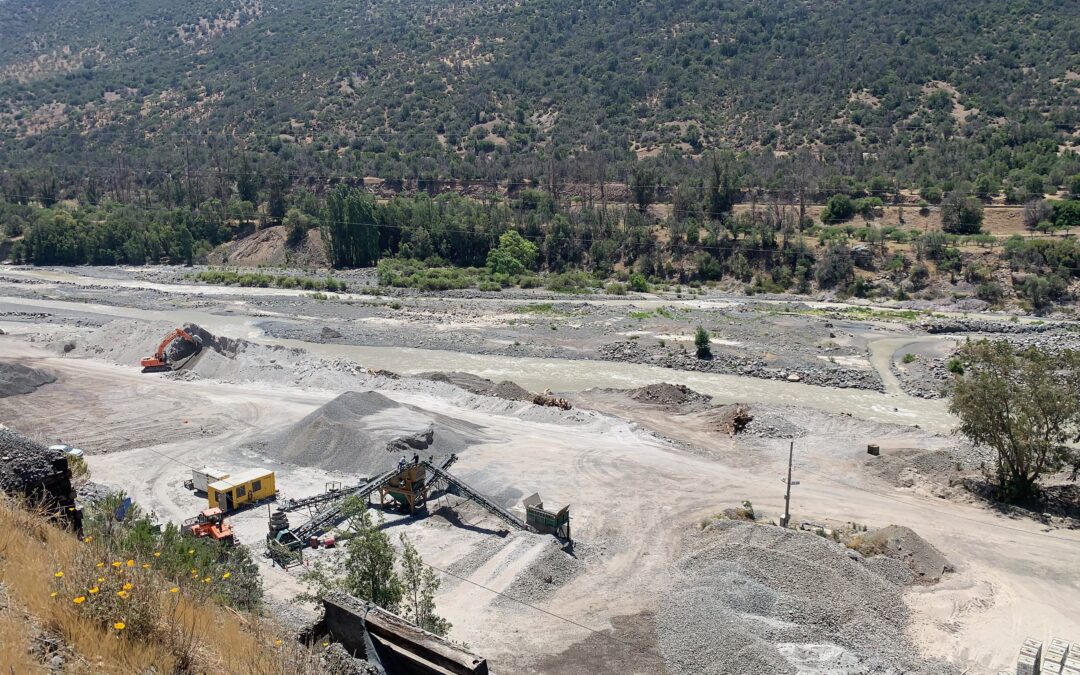 As I move ever further north up the country, some of the reasons for Chile’s wealth become more evident.

Riding along Ruta 5, the spinal transport road linking together the north, central and the northern part of southern Chile, it is very apparent how much logging is a huge part of life from the lake region and into Los Ríos,. There are huge pine and eucalyptus forests all along the way and with them, evidence too of the wild fires that can lay waste large tracks of brush and forest. At regular points there are enormous lumber yards where tree trunks, in various stages of transformation into usable timber, are stored and stacked. Some stacks, of dark black trunks, are being sprayed with a liquid that I assume is part of a preservative process. In other places, the piles at sawmills are being processed into fence posts or planks; sometimes, off cuttings and bark are being also pulverised into what look like dunes of sawdust, I assume for ultimate processing into chipboard and the like. And at various points also, there are outlets advertising “casas” — literally whole houses, ready-made wooden homes, albeit small ones, that can be transported and plonked wherever one wishes.

The road slices through the landscape, passing over river beds in parallel with the main railway line, whose mostly yellow-painted old bridges of bow-shaped steel girders bend in graceful lines leaping the valleys. They can appear like a family of dolphins, flipping in and out of water. As fields gradually take over the landscape, the land looks rich. The soil is dark in nutritious humus. Already in the south, many fields have been harvested for silage and gradually, as I progresses north, fruit trees multiply — apples, peaches, apricots and cherries — as well as hazel and wallnut trees.

And so too come the roadside fruit sellers and the processing operations — the factories where the produce is cleaned and packed, the concrete hard stands where the crates that are filled in fields are stacked and stored. One of the fruit growing and processing giants in Chile is the Irish-owned Dole Plc, part of the Total Produce group, whose lineage included fyffes and whose global corporate HQ is 29 North Anne Street, Dublin 7! The Chilean highway, now branded on hoardings as the Pan Americana, is filled with mid-sized pick-up trucks, flatbed trucks and some really massive transporters — US-made Macks and Freightliners, those bottle-nosed noisy American giants of the freeway.

Around Talca, I began to see the first evidence of Chile’s wine industry and before long, grape production, and all that goes with it, starts to dominate — together with roadside corporate advertising by the major brands, offering wine tours for the curious and the thirsty. The importance of the industry to Chile can be illustrated by one fact alone: 83 per cent of production is exported, which is the highest ratio of any wine producing country in the world, second only to New Zealand. So wine matters to Chile. There are over 800 wineries, employing 100,000 people, about half of them in production, the rest in logistics, sales and marketing. The industry represents 0.5 per cent of the country’s GDP and two per cent of all exports — and Ireland is one of the leading takers.

As I was getting nearer to Santiago, and had an appointment south of the city in a place named Buin, I wanted a perch for the night somewhere close by. But where?

As I got closer to the metropolitan conurbation that is the capital city, there was a road to the right off Ruta 5 at a place named Rancagua and which went towards the ever present Andes. The road appeared to follow the course of a significant river before doubling back again to the highway. There was bound to be a campsite somewhere along the way of this loop, I thought. Of course, there wasn’t but there was much more of interest besides.

The river, the Cachapoal, was one of those that tumbles off the Andes and is made fatter by tributaries joining it before it and rushes west across the Maipo Valley. At the point where I met it, the river bed was incredibly wide — in places I would estimate it to be several kilometers but it had very little water in it, especially for the time of year — early summer. Instead, the vast dry riverbed was being used as a source of rubble and sand for construction. All along the course of the valley, which the road faithfully followed, men and machines were gouging the dry riverbed — giant ‘dozers and diggers filling trucks whose contents were then carted off or emptied into enormous hoppers that poured their contents into crushers. Sifters and belts then conveyed the usable raw materials onto different piles.

I didn’t see much of concern in what might otherwise appear like a horrible assault on the landscape. Through glaciation and other forms of wearing down the mountains, nature had delivered huge quantities of rock and sand that could be harvested easily and, it seemed to me, without causing much damage to the environment. The material was clearly needed for road building and other forms of construction. As the road rose higher into the mountains, big trucks hauled their loads down the valley. The dusty air was made pungent by the pines and eucalyptus trees all around; condors circles above in that languid way they have of lazily wheeling, to no obvious purpose. 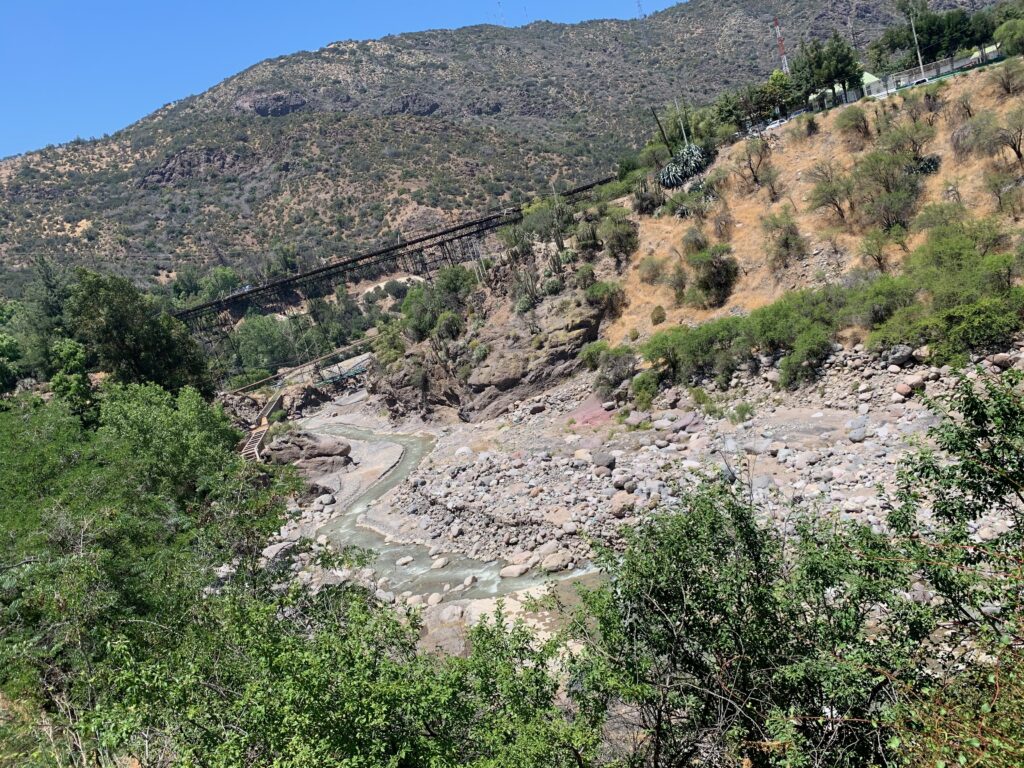 Even upstream, the narrow river flows in a valley clearly carved out by a much greater flow

High up and where the road veered left, for its return journey, looping back down, there’s a small town named Coya — 100+ homes, I’d say, some shops and a small hydro-electric operation — which explains, even if I did not see the dam, something of the dry river bed below, though it is caused mostly by global warming. The hydro-electric station is run by Pacific Hydro, which bought the facility in 2004, is being further developed and will eventually be able to supply power to up to 300,000 homes. There is some water in rivers up here but not sufficient to have created the valleys and riverbeds that exist. 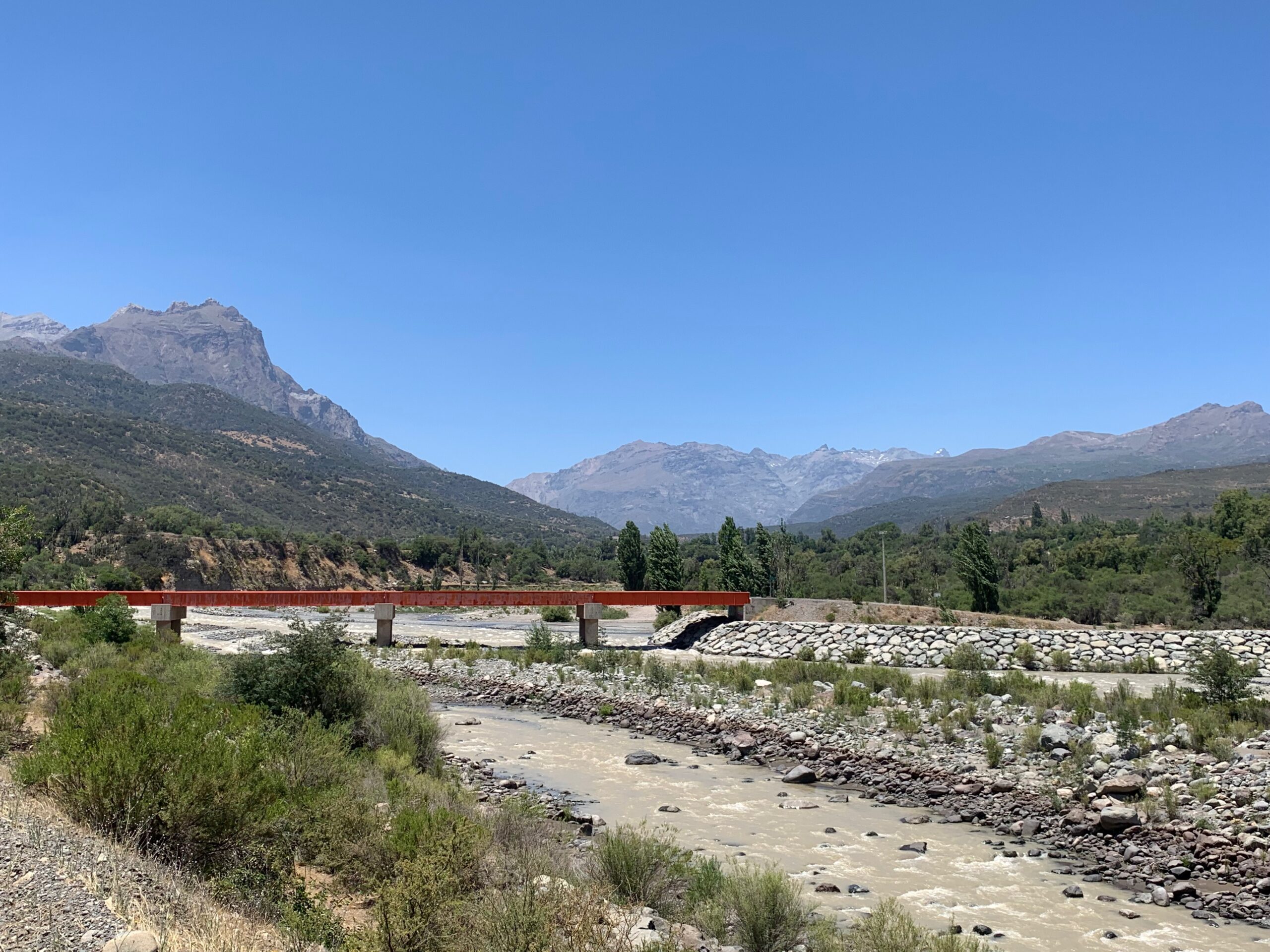 Riding out of Coya, I came to a junction that confused: one option saw a road continue ahead but another saw it fan out onto a large concrete apron and what appeared to be a motorway toll. 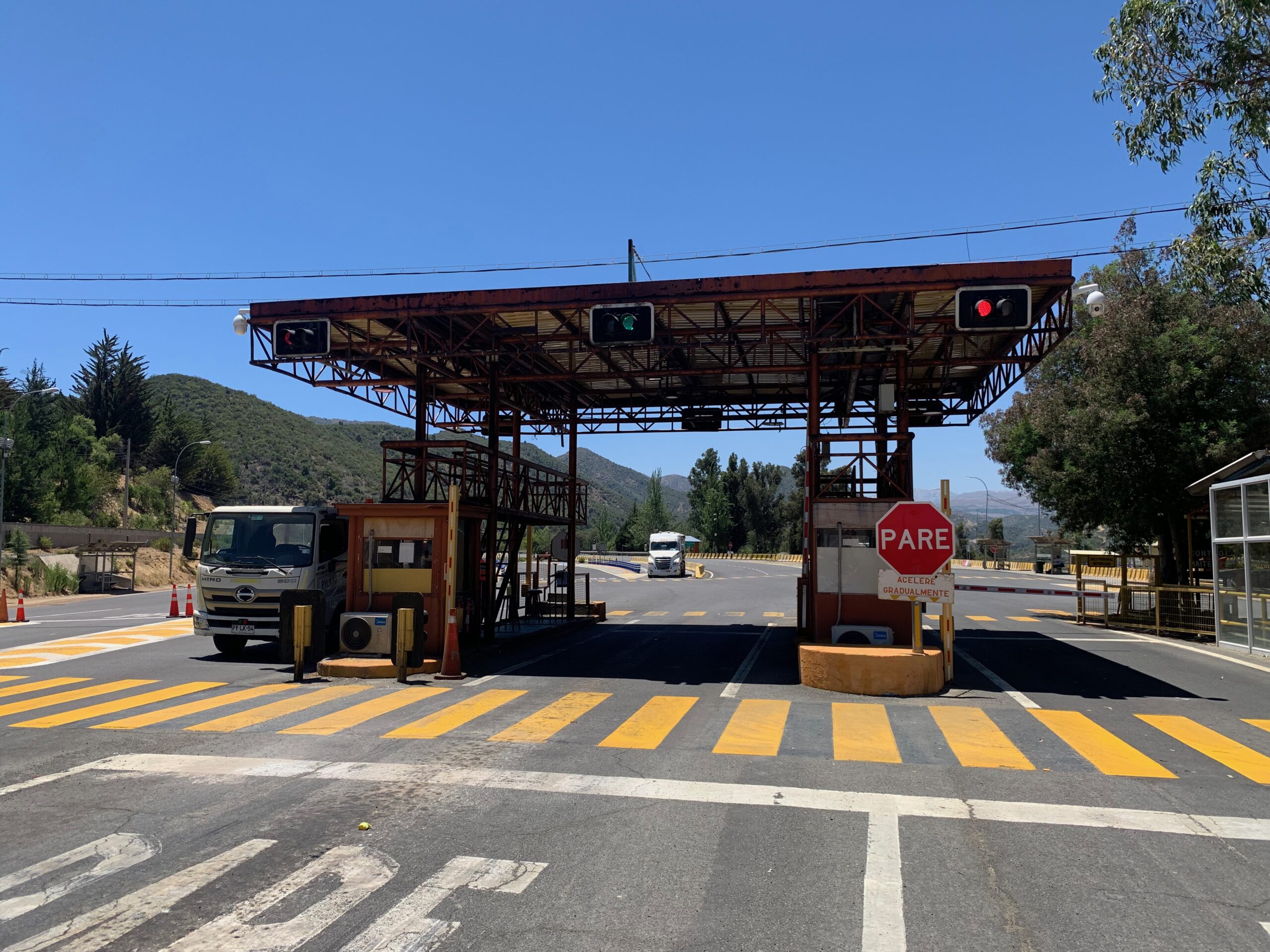 There was a row of bikes parked at what could have been a cafe. I stopped to nose around and I was actually at the entrance to El Teniente, Chile largest underground copper mine. Two lads in hard hats approach — Carlos Sanchez and Luis Gomez — and we go through the usual where from?-where going?-on a moto?-on your own? Wow! conversation. And then it’s my turn. . . 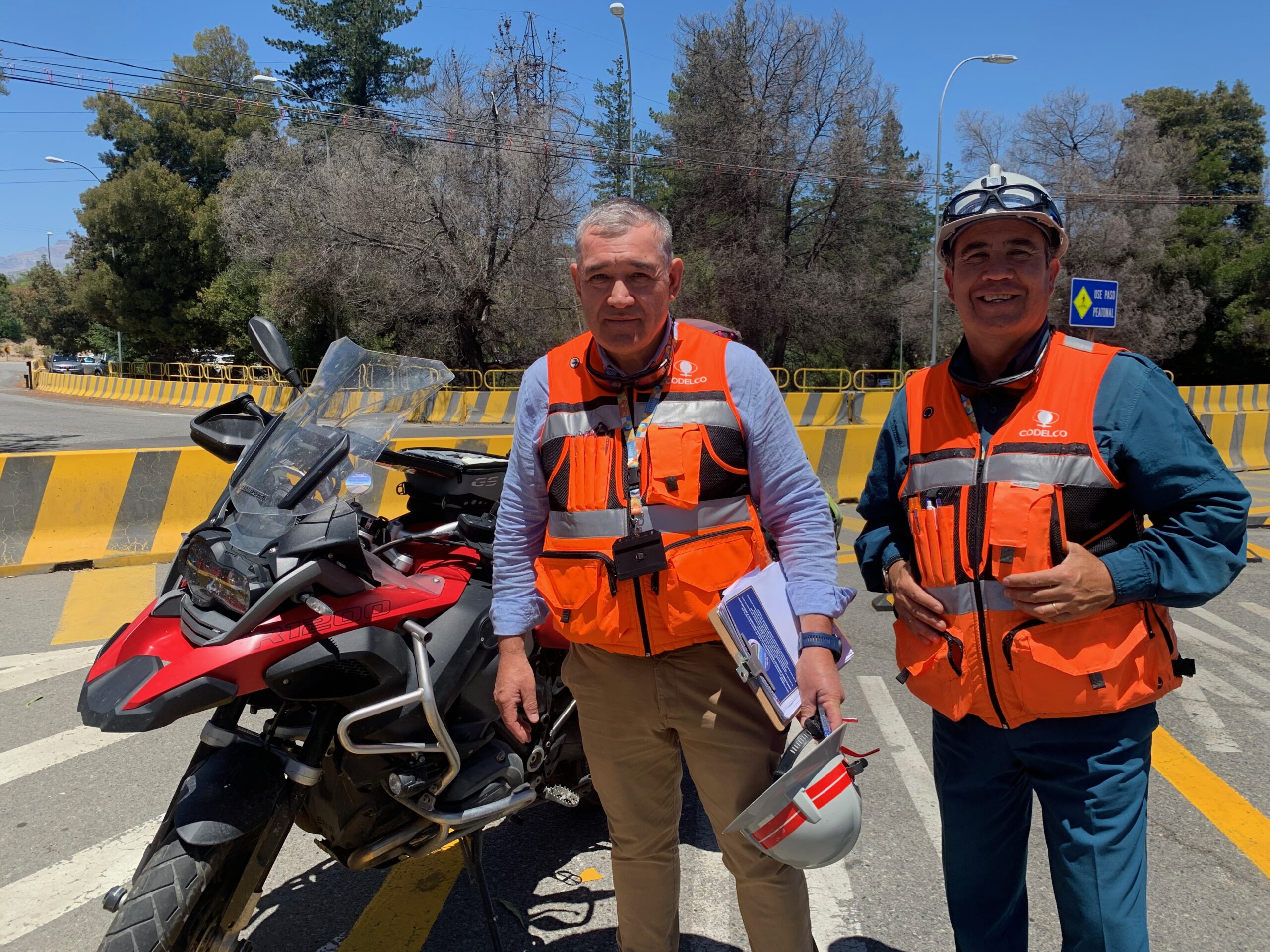 Carlos and Luis, security guards at the entrance to the  world’s largest underground copper mine

The lads tell me that there’s some 12,000 people employed at the mine, which is owned by Codelco. It’s an underground mine, meaning they tunnel for the copper ore, rather than gouging it off the face of the earth in an open cast mine, which is massively destructive of the environment — such as at the Codelco-owned Chuquicamata mine, in the Atacama Desert in northern Chile. Codelco is an amalgam of several copper mining companies that were nationalised by President Salvador Allende in 1971 and created as the existing entity in 1976 by, interestingly, the disgraced dictator, General Pinochet, who did not reverse the nationalisation of the man he overthrew.

Copper mining has been going on at El Teniente for ever and a day. The place used to be owned by the Jesuits who apparently had it as part of their Hacienda de la Compañia de Jesús, and called the mine the Socavón de los Jesuitas (literally, the sinkhole, or pothole, of the Jesuits). For much of the 20th century, it was owned by Kennecott, a Utah-based division of Rio Tinto. Today, the Chilean national flag flies proudly at the entrance “toll”, beside the company flag.

Trucks come and go but the place is oddly calm. Not much sign of frenetic mining nor any obvious visual impact on the landscape, save for the “toll” which is just a check-in and check-out point for employees and produce of the mine itself. The bikes, about a dozen of them, were owned by mine staff, said the lads. We shook hands, I gave them some Tip2Top stickers, which they liked, and was on my way.

Around the corner, quite suddenly there opened a vista onto the valley floor below and the large town of Rancagua again. Descending, I come to a sprinkling of homes scattered on the mountainside, on the flank that supports that large entrance to the mine itself. They are modest enough houses but, without being shanty-shack poor, there are no millionaires living there. I wonder do any miners live among them or are they merely people eking a living from the land, or some other down-the-pecking-order activity?

There’s a pull-in point to admire the vista onto the Maipu and two sets of power lines, their cables slicing down onto the valley floor, presumably from the hydro plant. A sign says the cables are high tension and it is prohibited to park under them.

But not, apparently, to build homes and to live there.