The shabby chic magic of Valparaiso 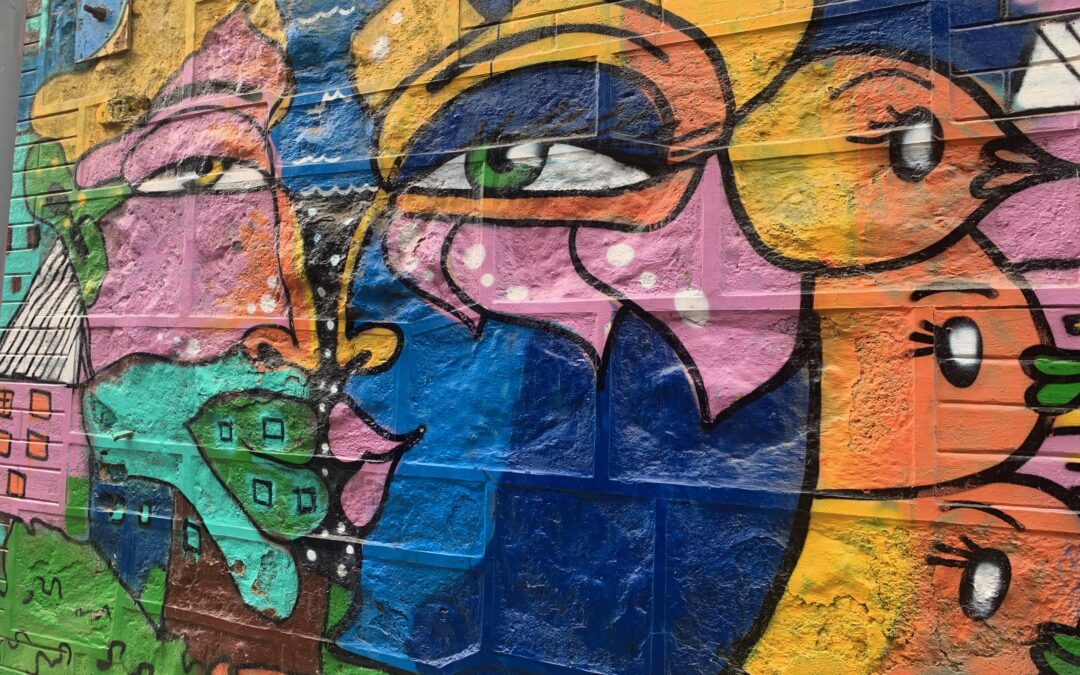 Valparaiso has always had something magical about it for me. Perhaps it is the poem by Oliver St John Gogarty, The Ship.

A ship arrived from Valparaiso,
Dropped its anchor in the bay,
Her name reminded me of kingdoms,
Sunlit countries far away.

Come along with me she whispered,
Far from cloud and mist for you’ll,
Find beneath the Andes Mountains,
An awesome city – bright as a jewel.

But I was young and would not wander,
With hope and youth I chose instead,
The promises of verse and fable,
From the wondrous books I read.

The ship sailed off into the vapour,
Shining like gold its mast so bright,
It wrote its story on the parchment,
High amidst the stars that night.

She will return to me, however,
The white city, I still conceive,
That by the sea of peace eternal,
I too shall be, if I believe.

The poem was translated into Irish, as Valparaiso by Pádraig de Brún, and indeed today, is perhaps better known in that version. But I suspect it is some sort of childhood school echo of the Gogarty original that has for me the very word Valparaiso lodged in my head as a place of great romantic attraction, a place far away to which I want ever to go — to those kingdoms and sunlit countries, as Gogarty had it. Reading the last verse in the Gogarty version, it seems more likely that he, the author after all, was expressing some sort of faith-based longing . . . “the white city . . . peace eternal . . . I too shall be free, if I believe”. However, now I think for most people what lodges in the mind is the siren call from the mists beneath the Andes, inviting us to that jewel by the sea.

I rode into Valparaiso on a sweltering hot December day, the whole of central Chile being burnt to a crisp and the highest temperature on record for the country — 41.6 degrees — had just been recorded near the sea port. I went straight to the La Joya Hostel near the sea front and which promised safe parking for the bike. There was indeed safe parking, albeit in a garage with a roller-door open permanently to the street! The first floor hostel itself was uber cool — full of black and white signs, cast in that very “in” written script style, and lots of post-industrial chic tubular steel furniture. There was a low slung sofa and wooden pallets fashioned into coffee tables. On an adjoining top floor there was a pub-cum-burger joint doing a roaring trade, and not just from backpackers at the hostel. 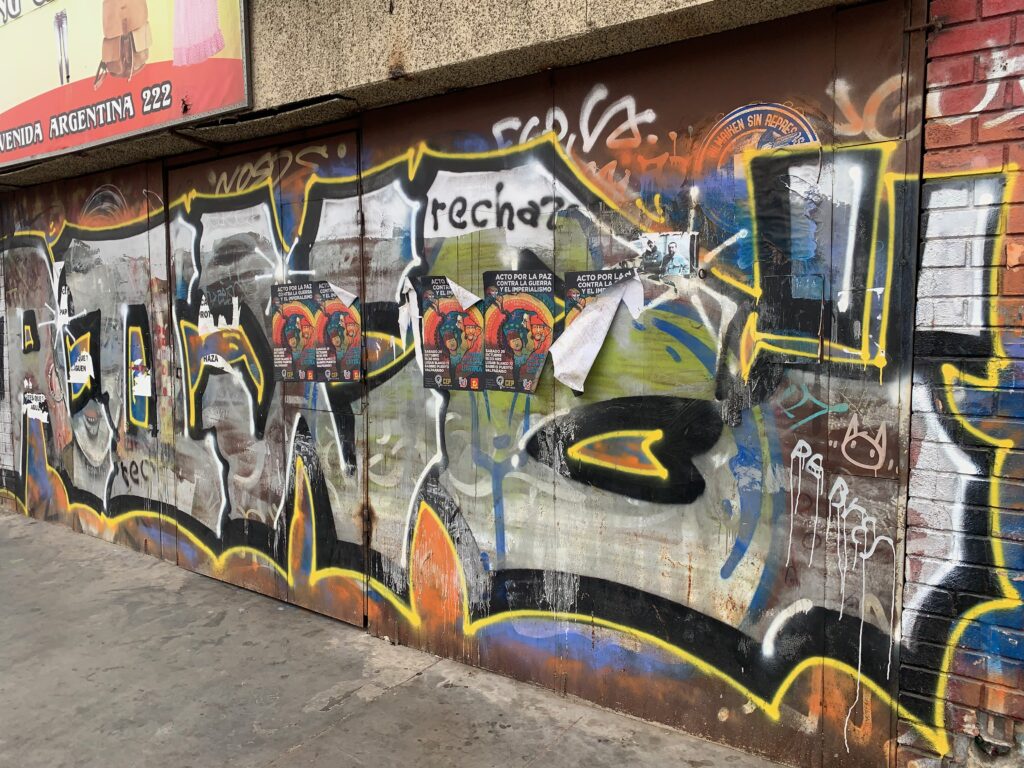 Outside was typical Valparaiso urban chaos! Crowded, noisy streets and footpaths. But awful graffiti everywhere gave the place a deeply run-down feeling; shops, so apparently fed up with the spray pain, had given up trying to protect their facades and had their shutters down all the time. The city, which is in effect an amphitheater looking out on to the Pacific, used to have 26 funiculars but only 16 remain functioning. One of the closed ones was by the hostel and a very sad site it looks — all broken timber and twisted rusty metal.

Across the main thoroughfare by the hostel was the city’s fruit and vegetable market — though as much seemed to be going on outside the market hall as inside it. Farmers, middleman, sellers and household buyers (some doubtless small traders intending to sell on) filled the pavements as men and lorries lugged produce this way and that. Cars tried as best they could to make their way through it all. Liberal use of the horn was employed by all.

My favourite part of the city is the far southern end, the hill known as Concepcíon and which overlooks the rest of the chaos. In front of the hill is the sea, to the right, today’s bustling city, and to the left and below, the Barrio Puerto with its buildings that remind of a different, possibly more prosperous, era. Valparaiso’s heydays were from the mid-19th century to the mid-20th. What spelt the end, or at least a major change, was the opening in 1914 of the Panama Canal. Prior to that, all shipping from the east going west, or visa versa, had to round Cape Horn and generally stopped at Valpo for R+R and any fresh supplies needed for the onward journey, often up the west coast of the Americas. The port was also the main route out of Chile for the country’s vast mineral treasure trove. Since the opening of the Canal, and with it the loss of a big chunk of business for Valparaiso, other ports have also been developed on Chile’s Pacific coast, notably in the north but, despite all that, Valpo remains a major port.

Why do I like Concepcíon? Because on that hill there is the most extraordinary collection, spread across a warren of streets and walkways, of timber buildings made to serve the needs of the community that built and operated the port — their homes, machine workshops, retail outlets, offices and churches. The roofs are almost invariably corrugated iron, and if the external walls are also, they are usually clad in another, flatter but also ribbed, form of metal. 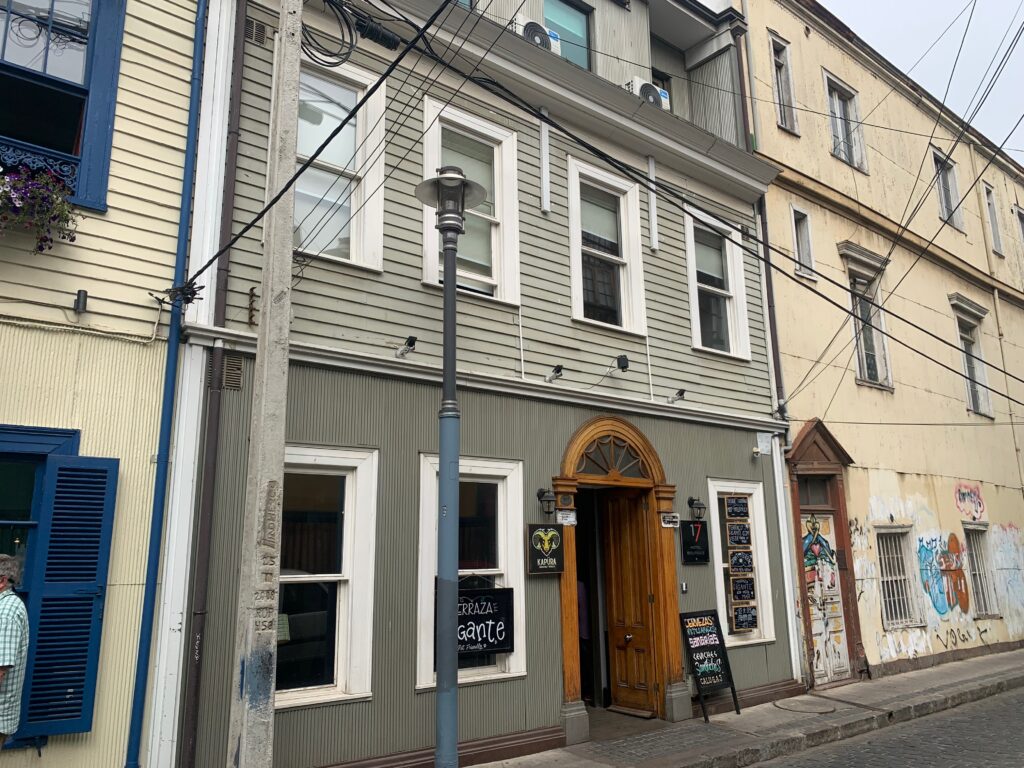 Once run down like its neighbour, now an attractive restaurant 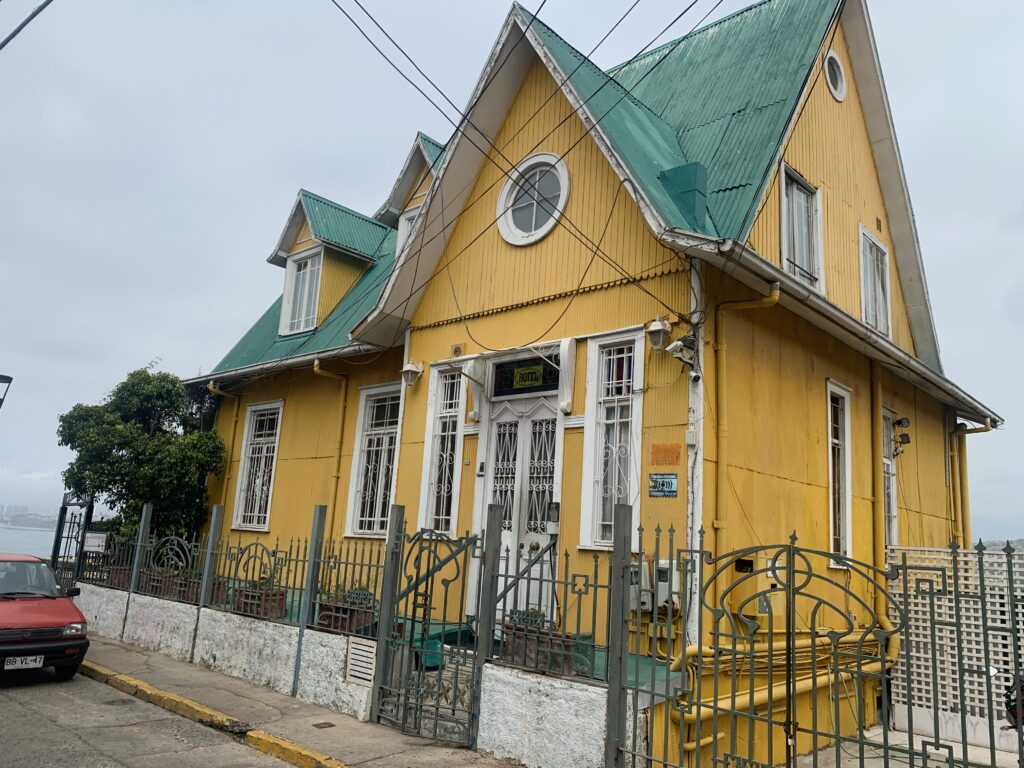 A home in need of sympathetic restoration

As the port declined and other changes of modernity kicked in, Concepcíon went downhill as well. Today, it is on the up, thanks to gentrification. But it remains a beguiling mix of the shabby and the chic. Some buildings are rundown and some are simply falling down, all peeling paint and windows askew, and others that have been restored and are super trendy, or are merely occupied by artists and the like while owners ponder what to do with their asset. 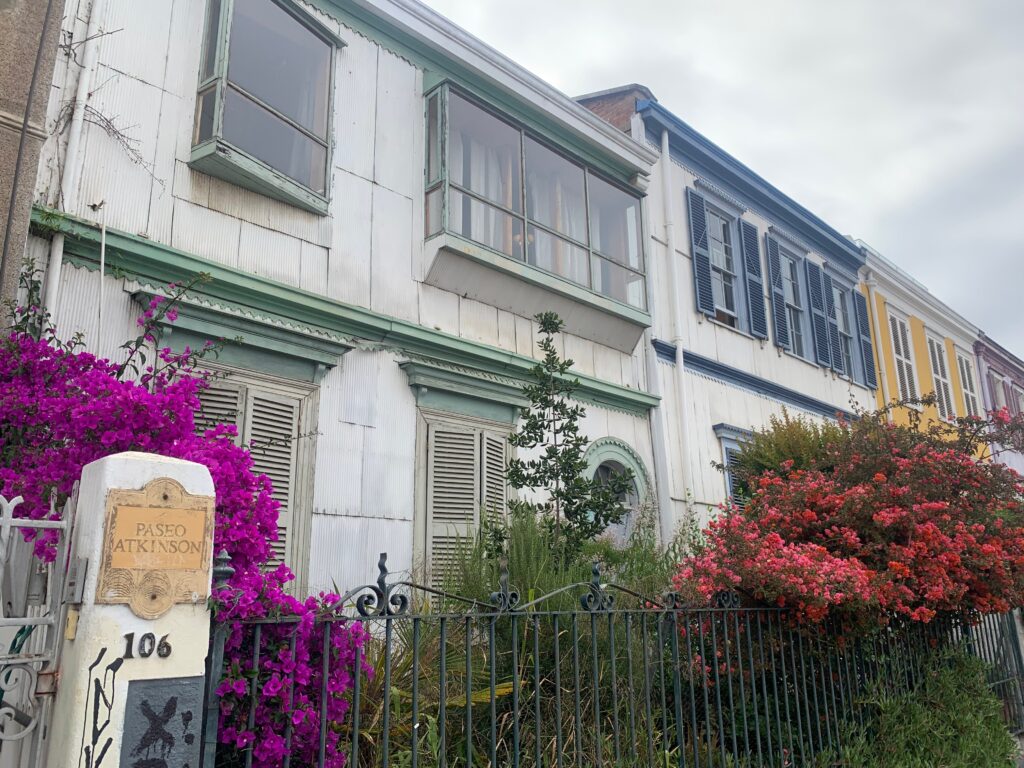 Some terraces, such as Paeso Atkinson, are a mixture of done up and still run down. One suspects there may be more than a few squatters about. The whole area is a firm favourite for artists, students and intellectuals, as well as drop outs. There are lovely hostels and hotels, eg the Bristol Hotel, (but don’t lean on the balustrade as its so rotten you are likely to plunge into the barrio below), boutique stop-overs, cafes and restaurants. 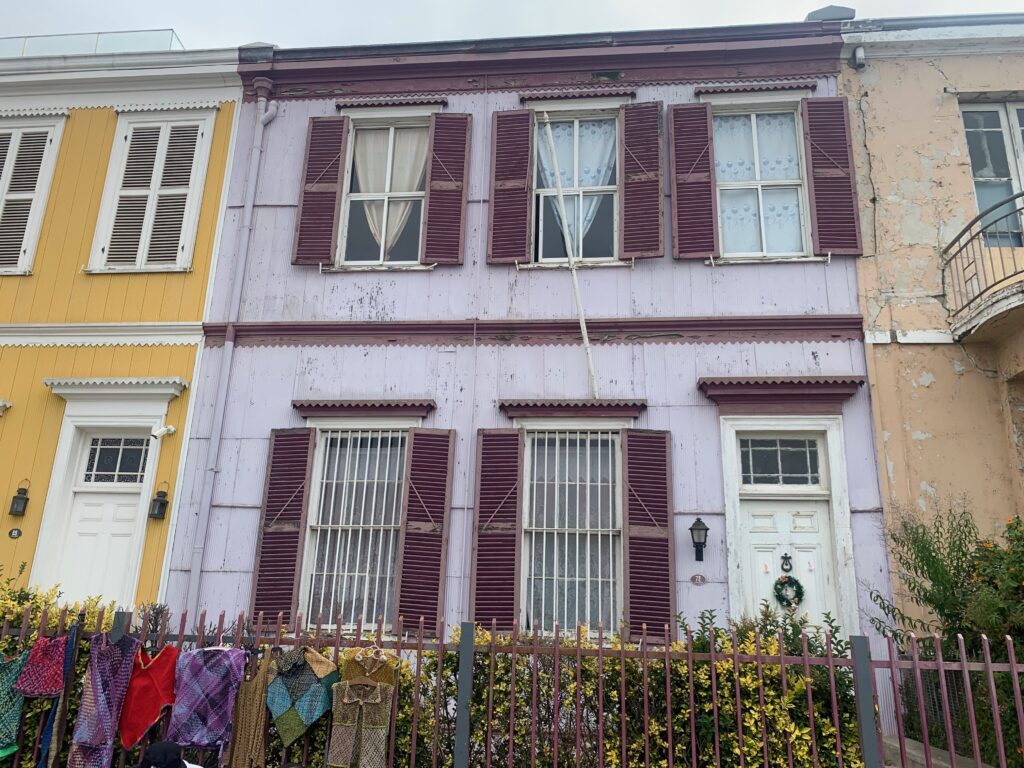 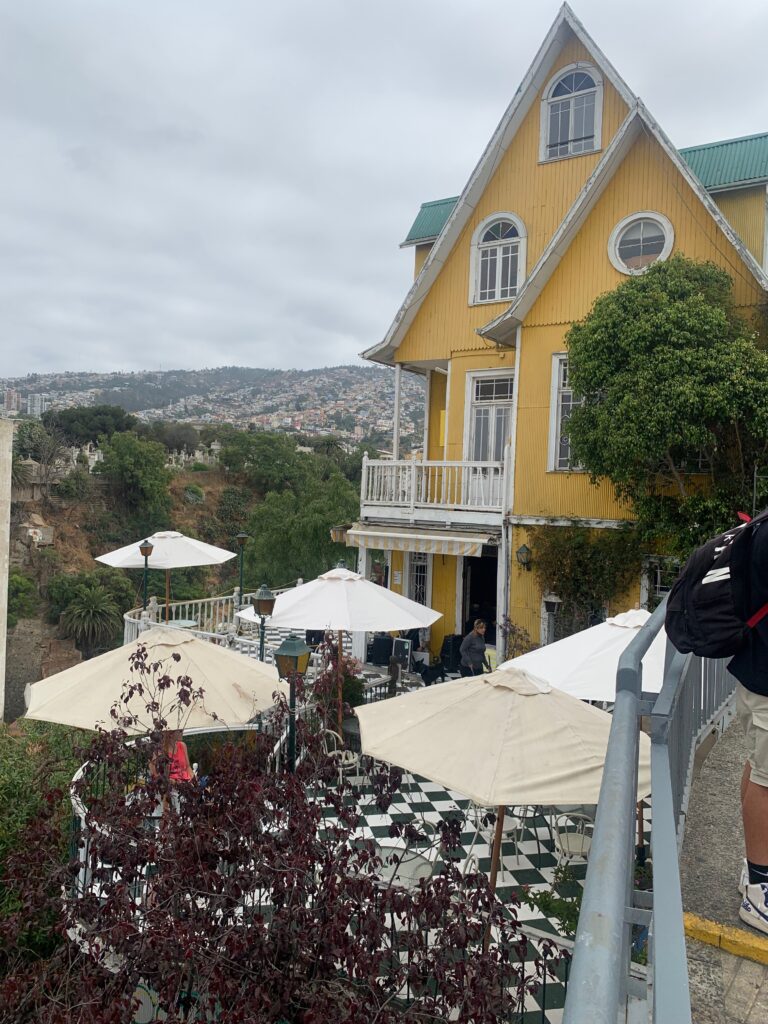 The beautiful Britsol Hotel. . . and its dodgy terrace rail.

Concepcíon is the one place in the city where I think it is fair to refer to much of the graffiti that covers many of the buildings as art. Walking tours abound and well-informed guides, often retirees or students earning beer money, have a good knowledge of many of the artists. Some of the huge, full facade or gable end paintings are commissioned by the property owners. Some of the artists have become known names, painters like Sabastián Varas Mackenzie, who specialises in black and white works, marking him out from the rest, and Mauro Goblin, who some liken to Banksy. Several have graduated from the street, take commissions and have their own galleries. One of the best known is Cuellimaqngui, whom I met while on a walking tour, flogging his work on Paeso Atkinson. A very pleasant, friendly fellow!

Rather than try to describe the colours and vibrancy that one seen in Concepcíon, I’m just going to let the works speak for themselves… 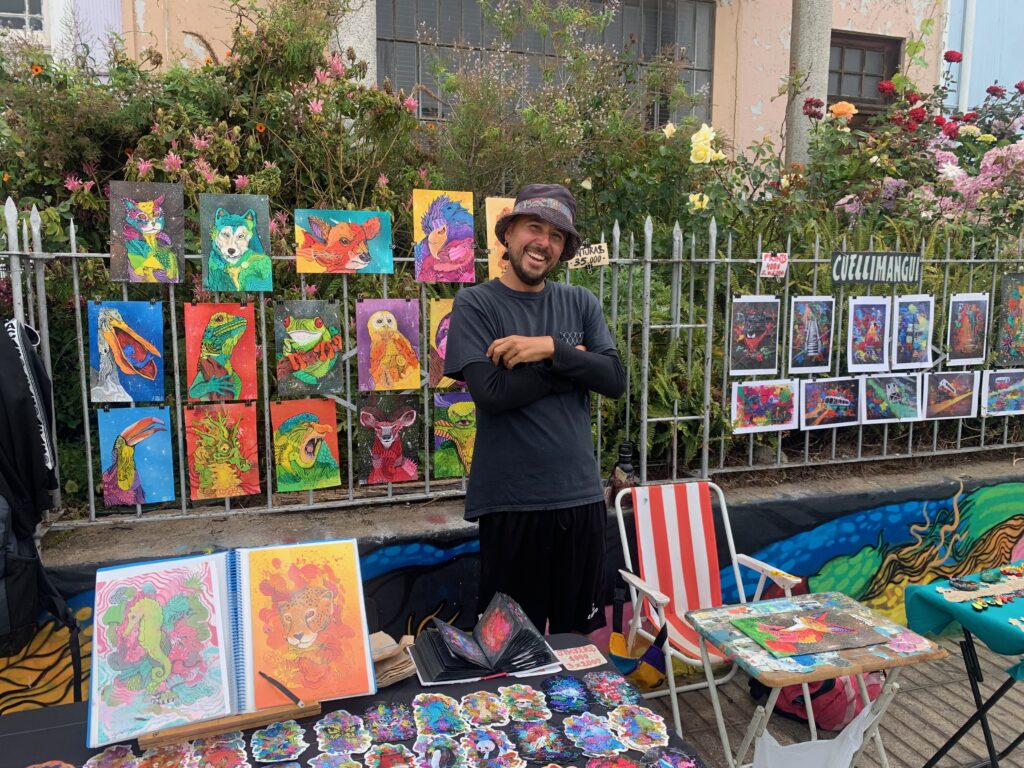 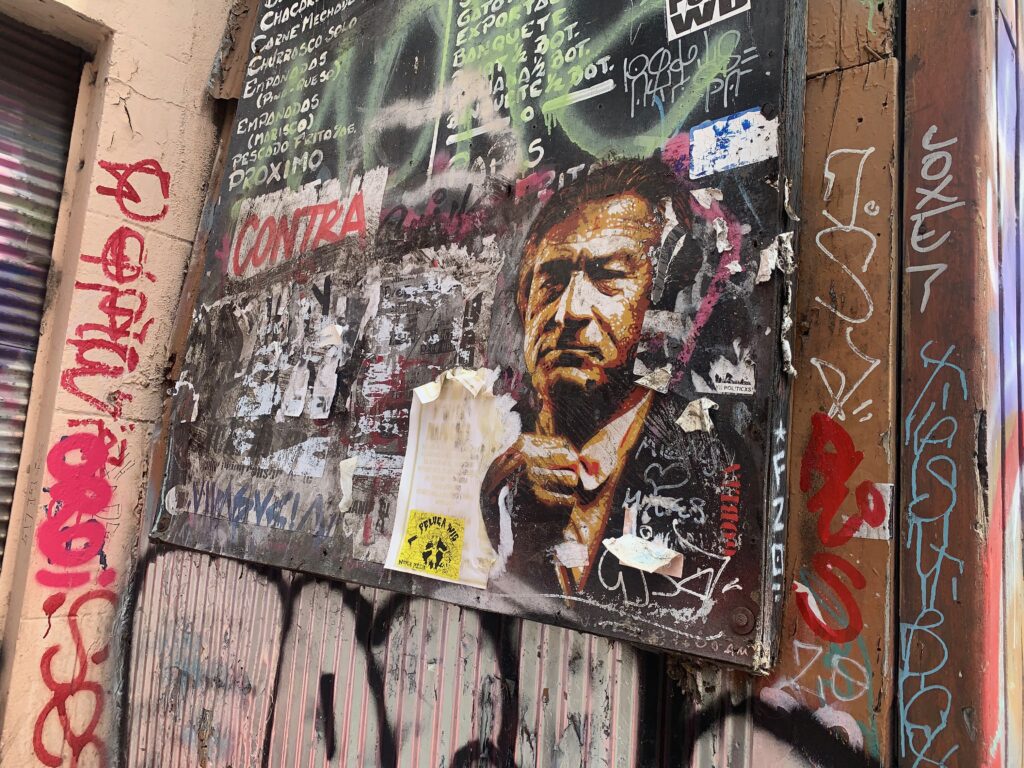 A work by Goblin, itself now the victim of paint vandalism 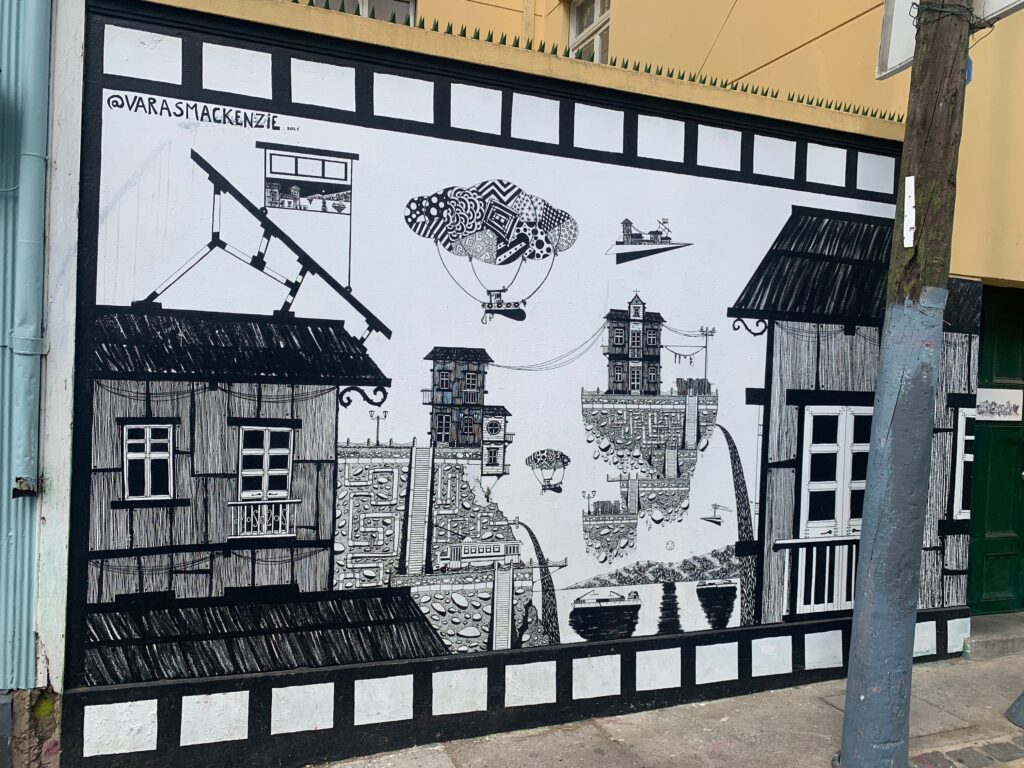 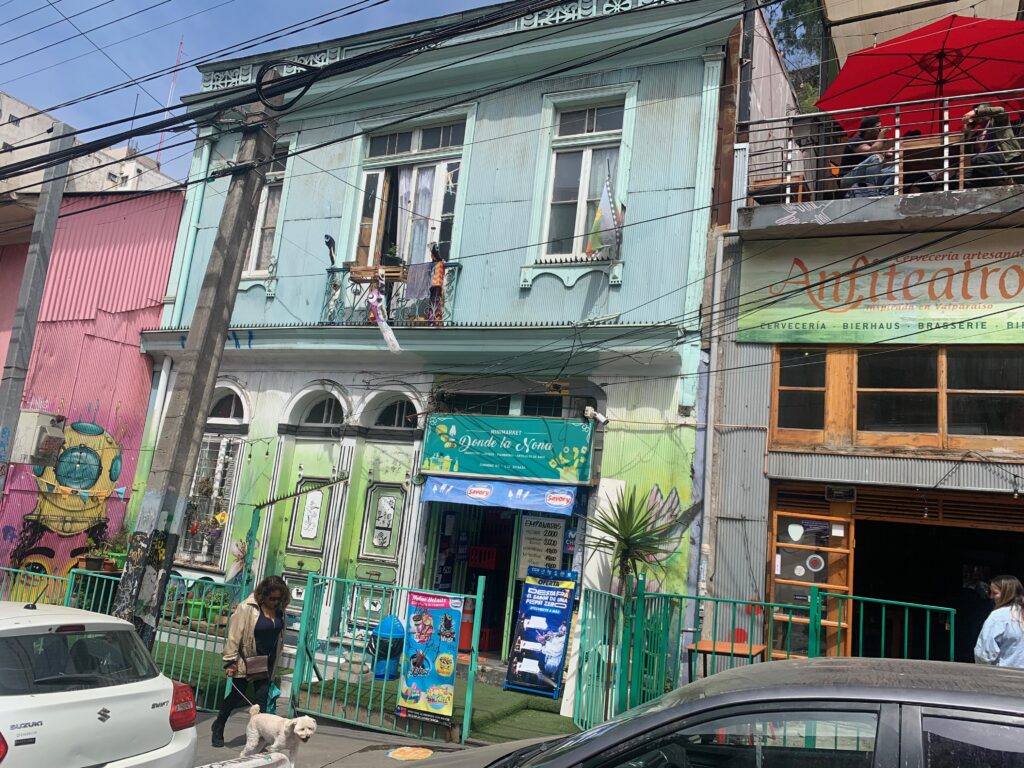 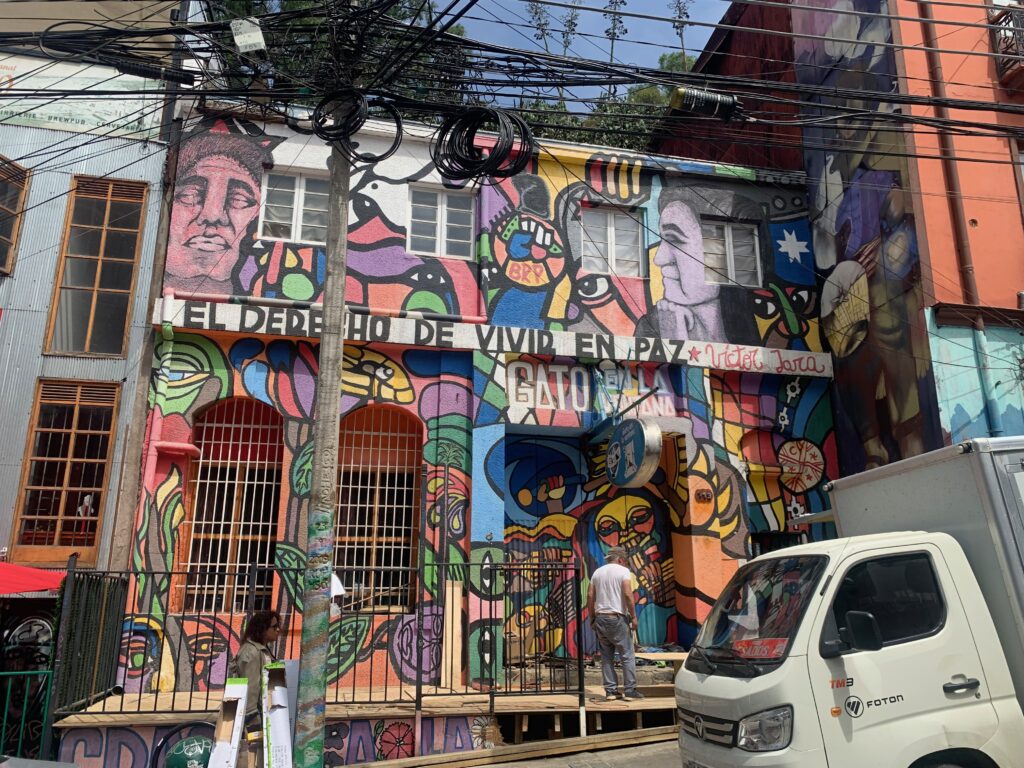 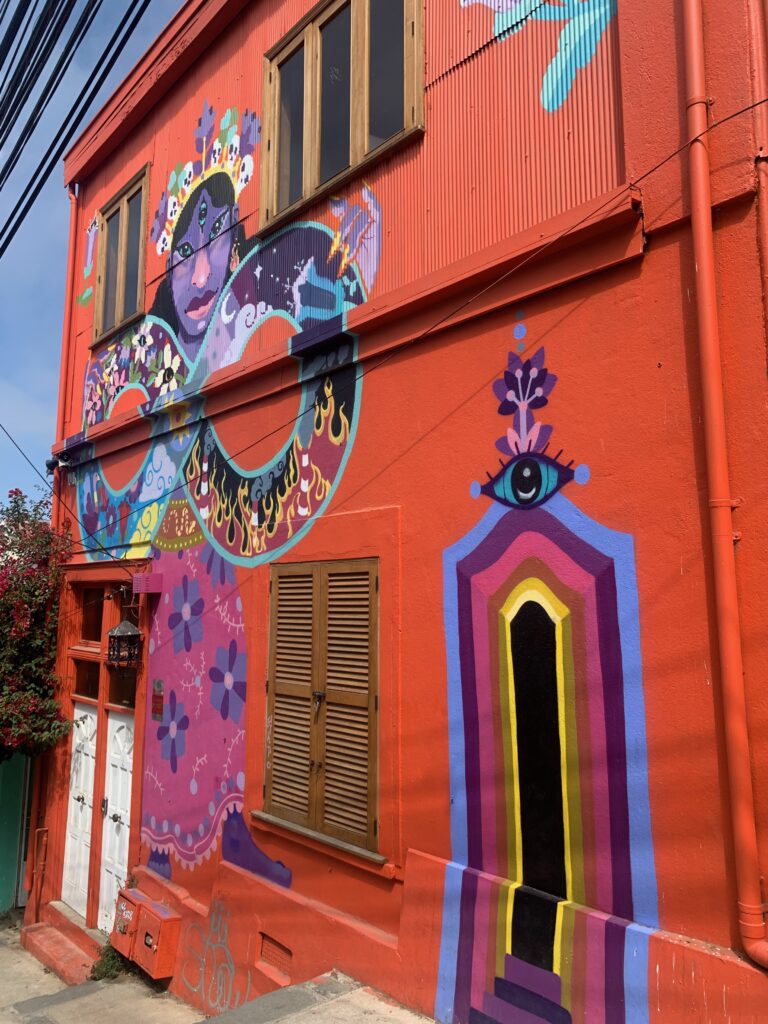 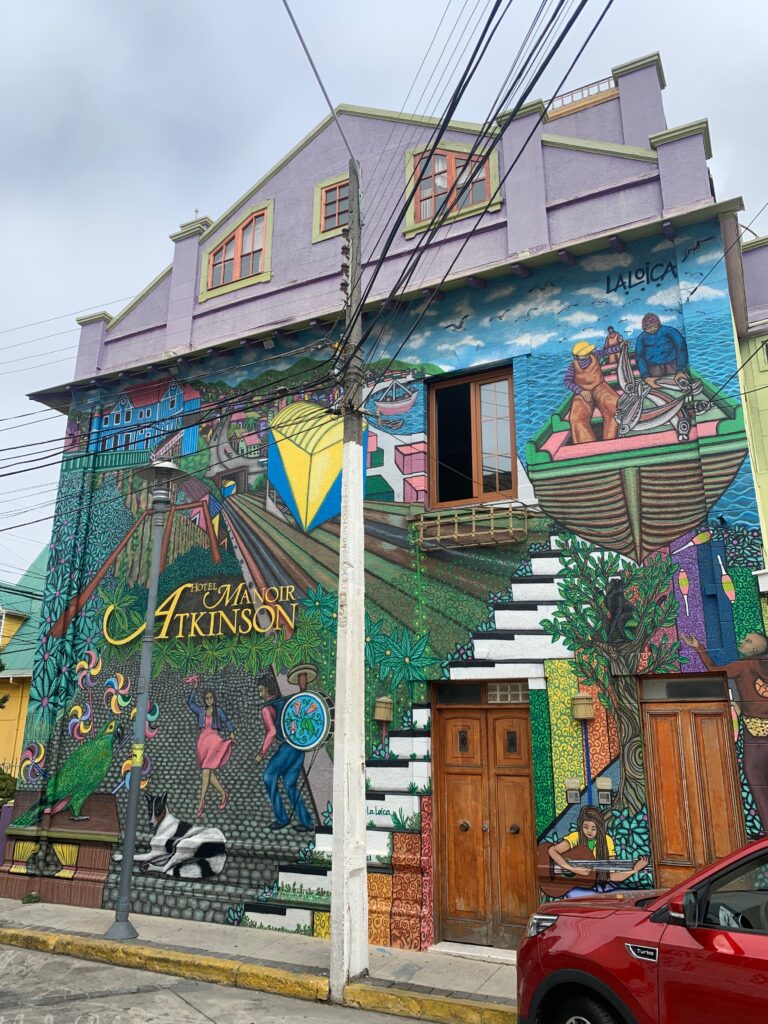 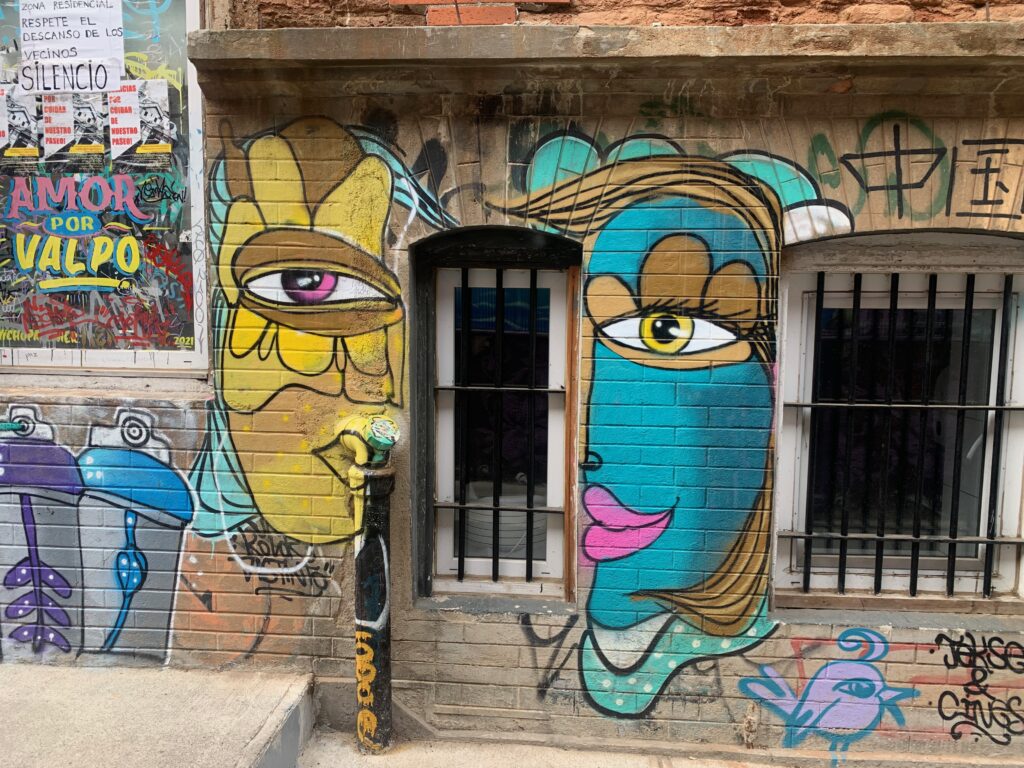 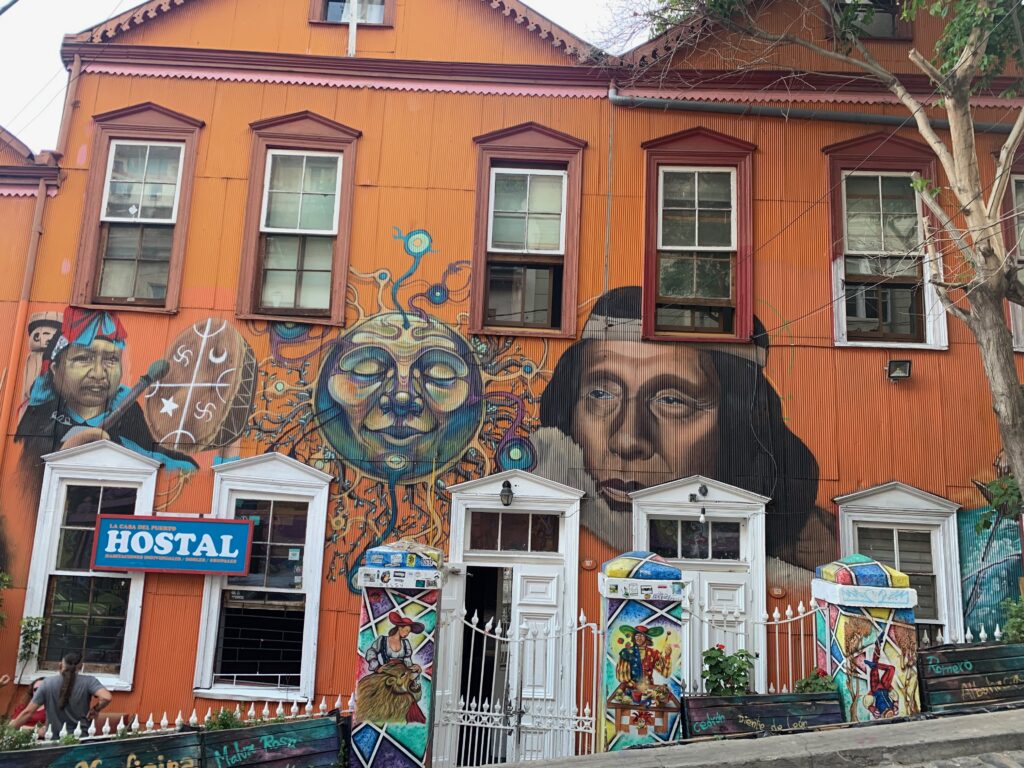 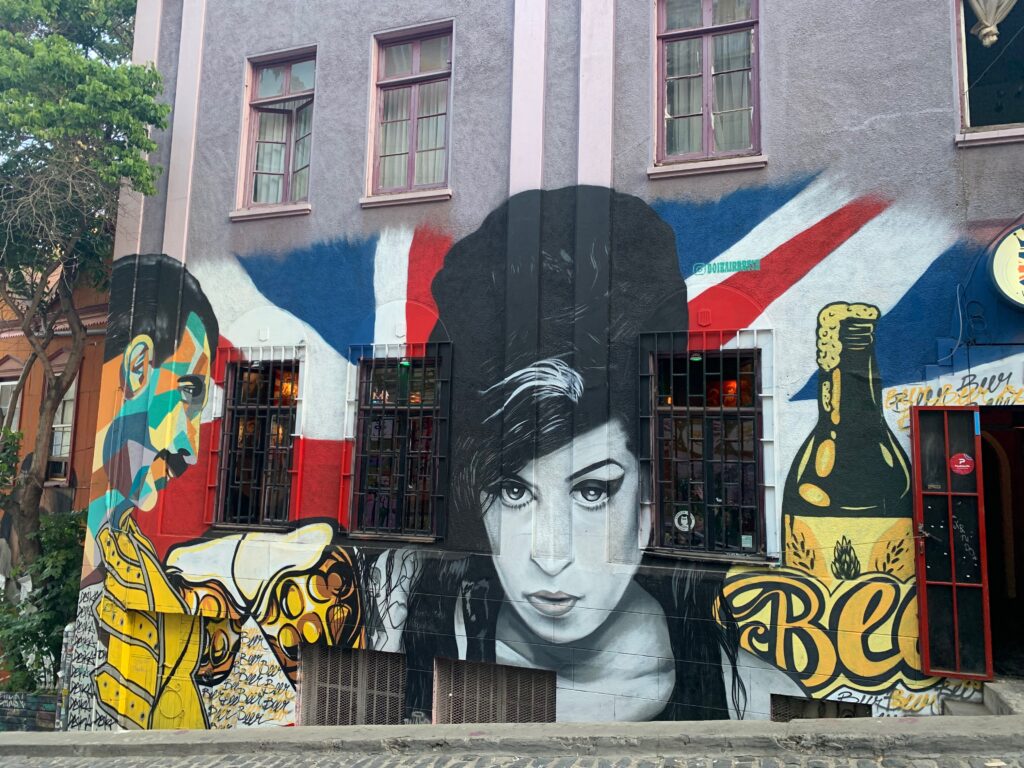 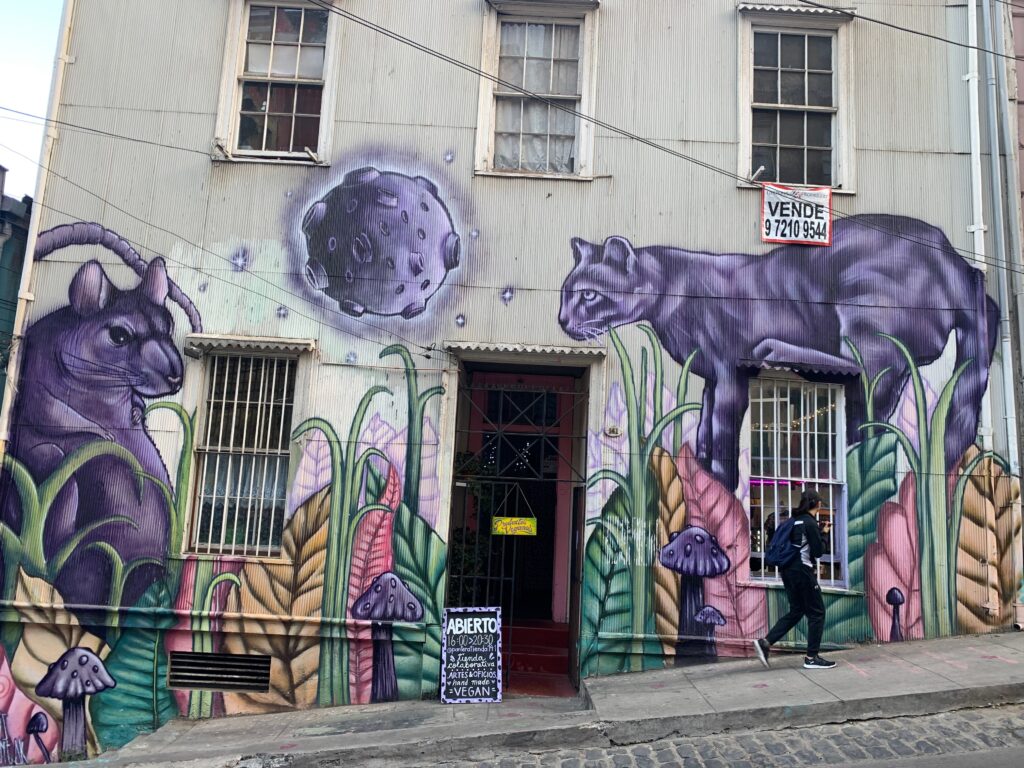 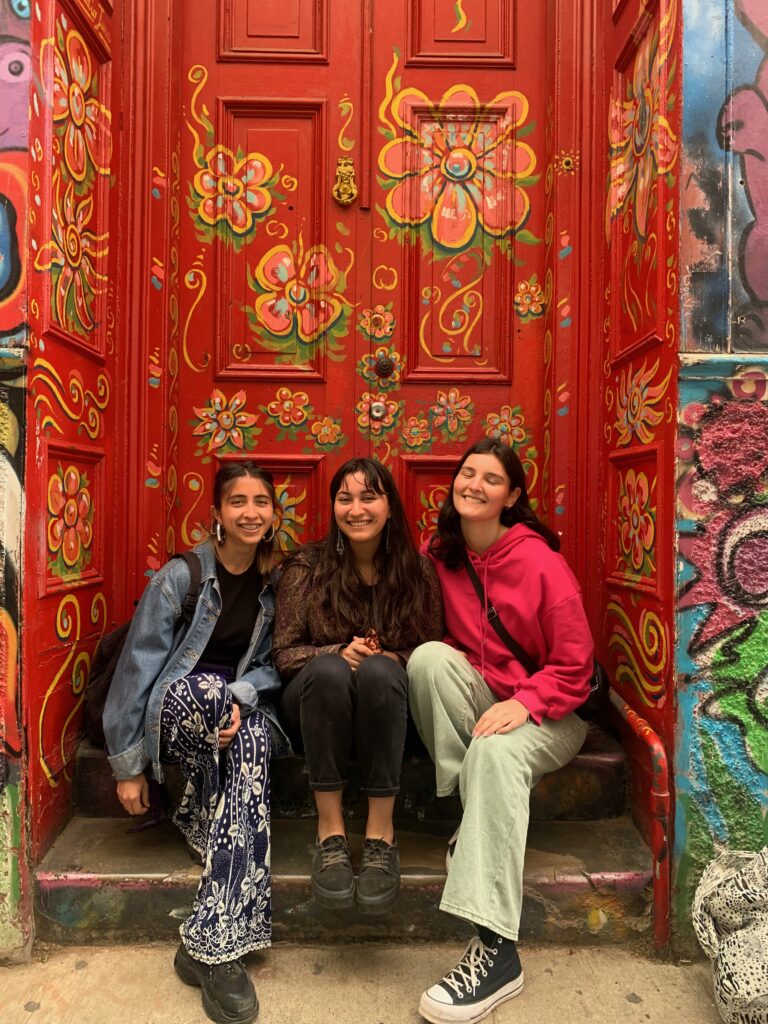