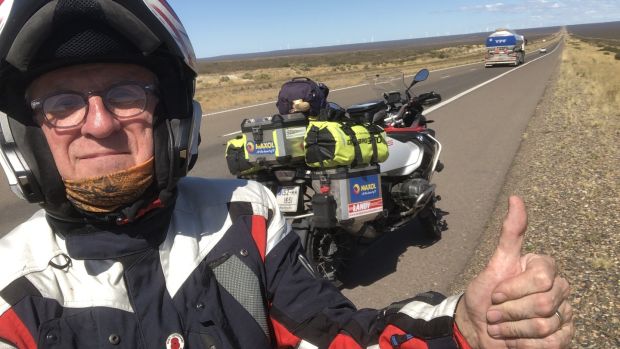 IN A NEW SERIES, PETER MURTAGH TRAVELS FROM PATAGONIA TO ALASKA ON A MOTORBIKE

A group of bikers, all looking the part, are standing on the forecourt of a petrol station in the middle of south Argentina’s Patagonian Desert, fascinating themselves over their machines and respective stories.

“The borders are closed,” announces Andre, a large man from Rio Grande in southern Brazil. It’s all down to governmental “paranoia” about the coronavirus, he pronounces, adding that those of us heading south will just have to tweak our biking adventure plans.

Another biker arrives from the south heading north, covered in dust and mud like he’s just ridden through a filthy storm. It’s Gregg Holmes, a 56-year-old agricultural fencing contractor from New Zealand, who did Alaska to Tierra del Fuego, travelling on a Honda Africa Twin, and is now heading back north. He has a big warm smile and exudes camaraderie and a love of life.

“Disasters?” he says when I ask if he had any on the way down, “Nah. I did get stuck under the bike in Copper Canyon in Mexico but a couple of truckers came along and just picked it up off of me.”

Everyone heading south decides to turn around because they are sure the borders in South America are closed. But I’ve been told by Irish diplomats in the region that the border between Argentina and Chile is open for at least another 24 hours. I pass on the intel but the others aren’t convinced.

I didn’t feel, deep down, that there was much to celebrate

I’ve already ridden 120km through extreme austral crosswinds, and the prospect of another 250km doesn’t exactly fill me with joy. “There’s nothing out there mate,” Holmes says to me, “nothing but wind and desert for at least 200kms.”

So is this it? Is it over before it’s even begun? Do I follow the herd and turn back? Does this damn coronavirus mean I should postpone for a year? I check flights. It’s possible to go Rio Gallegos-Sao Paulo-Madrid-London over about 40 hours with no guarantee of getting to Dublin. And what of the bike?

When I retired as a staffer with The Irish Times almost exactly a year ago, people expressed their delight for me.

The problem was that, despite the warmth and generous intention of the remarks, I didn’t feel, deep down, that there was much to celebrate.

All I ever wanted to be was a reporter and I remember today, as clear as when I was aged 20, that this meant only one thing – being a reporter for The Irish Times. It was the paper, the one my father read every day (except when it went up in price by a penny or two and he’d huff and puff and say “that’s it, I’m not paying that for that bloody thing any more” until, within about 48 hours, he’d realise that life was not worth living without news he trusted, the Simplex crossword, the births, marriages and deaths listings, Irishman’s Diary and letters to the editor).

So for me, walking out the door wasn’t all that easy after close to 40 years rattling around various papers in Ireland and Britain – but mostly The Irish Times. About 25 of those years were spent in editorial management but for the rest, I was a reporter, my first and greatest (employment) love and one to which I had been able to return for my final six years.

April 2019 kept getting closer and closer, but I eschewed all wind-down preparations, except for a two-day course with the Retirement Planning Council of Ireland, of whose existence I was unaware for the previous 65½ years. There was plenty of useful, practical advice about how to apply for the State pension and the free transport pass but the suggestion that stuck in my mind was how doing pilates now would help me get up again later. When I fall over.

So this was the future: a relentless decline into decrepitude; toppling over, unable to get up again; drooling; growing tomatoes; sinking into slippers in front of daytime TV. Or, as my brother joked, occupying an entire day by posting a letter.

Well, feck that lads. Off you trot to your vegetable patch but not me.

This adventure is what I’m at. I’m riding my motorbike, a BMW R1200 GS Adventure from Tierra del Fuego at South America’s southern-most tip to Alaska, the opposite way to Holmes and most other bikers – but why not? The plan is to get to Porto Williams, the southern-most town, on the Isla Navarino in Chilean Tierra del Fuego, and then head north, to northern Alaska and Prudhoe Bay in the Beaufort Sea, via the Yukon to the – perhaps appropriately named – oil town of Deadhorse.

Without planning it this way, motorbikes have come to bookend my adult life. When I was 17, I got a Honda 50 and then a Kawasaki 90SS, which went like a rocket. There were six of us in a gang – Don, Cockie, Brian, Howard, Alan and me – and we painted our helmets grey and put on go-faster red stripes and we thought we were the bee’s knees. Some girls agreed.

And then we all kind of grew up and I stopped biking.

In July 2007, a pal (Tony Sullivan) suggested we go for a motorbike jaunt through France and Spain, roughly following part of the Camino de Santiago de Compostela. The result was A Sort of Pilgrimage, a series I wrote for The Irish Times. But of more lasting consequence, at least for me, was the birth of my love of the camino (properly done, on foot) and the rebirth of my love of motorbiking.

Since then, I’ve had biking expeditions with Sullivan to the Balkans and Romania and, with Geoff Hill, a biker-journalist pal from Belfast, to Brazil and following the route, through Ireland, Britain, France and Spain, of Carl Stearns Clancy, the Irish-American biker who was the first person to ride a bike around the world, which he did in 1912/’13 and which Holmes re-enacted in 2013.

So, for the past 10 years I have owned several BMW GS bikes as I have reacquainted myself with my inner hooligan, using the bike every day to go to work and chase stories.

The German-made bike is incredible. It was popularised by Ewan McGregor and Charlie Boorman’s The Long Way Round, their 2004/’05 circumnavigation and TV series. My current machine is a 2015 GS Adventure TE (which means Travel Edition). I bought it on eBay from a man in England, Stephen Hingston, a nuclear engineer living in Devon. Via email and a few phone chats, we developed a mutual trust and I paid him close to €14,000 without actually seeing the bike.

Madness? Yes, but rewarded. Collected in mid-November, it was in pristine condition and, on his dining-room table, he had laid out every single document relating to his two years’ ownership, including the till receipt for one of two minor additional purchases, including a side stand foot extender.

“I envy you,” he said, just before I rode off, “but I’m just not using it the way it should be. My heart is heavy but I’m glad you are going to take it on the sort of adventure it was made for.”

Leaving home was very much harder and more upsetting than I bargained for, even though the moment had been coming for a year. I am blessed with an understanding wife, Moira, and grown-up children, Patrick and Natasha, but I know that this time, I am really pushing their indulgence. From afar, I can listen on my phone to Morning Ireland and Sean O’Rourke, and read the paper, and am no less immune to Covid-19 anxiety than anyone else.

And to make matters worse, much worse, this week, Midge, my trusted little pal of over 15 years, died. This little Jack Russell loved me and I completely adored her. We slept together nightly, ate, drank and watched TV together (she even attended editorial conferences in The Irish Times and made everyone smile).

Now she’s gone and I never gave her a proper goodbye and cuddle when I left home on March 7th. I am filled with sadness, grief and guilt.

I left the others fretting and indecisive at the petrol station. The ride to the Argentine/Chile border post at Austral is, as Holmes hinted it would be, horrendous. I have to lean into the wind to a terrifying degree just to keep the bike – all 389kg of it – upright but it still slews across the road through the buffeting force of the gale.

But the frontier is open and, after the requisite bureaucratic formalities are completed, Argentina lets me out and Chile lets me in. Via a Chilean petrol station with just 27km left in the tank, I reach Punta Arenas as the sun sets – 562km since setting off that morning.

I’m looking at the Strait of Magellan and hope to cross it and the Beagle Channel. The names of the places! I’m as excited as a child.

The immediate goal is to get a ferry to Puerto Williams on the Isla Navarino, which is Cape Horn. Weather permitting and if I can find somewhere to leave the bike safely, I want then to hike about 20kms to Lago Windhond and spend the night in a tumble-down wooden shack there called the Refugio Charles, or maybe stay in my tent, and walk back the next day.

This, as far as I can tell is the very southern-most place one can stay, short of going to Antarctica and after that, the only way is up.

Stop Press! As used to be said in newspapers – the regional authorities of Magallanes y Antártica Chilena have just announced a clampdown on foreigners moving by ferry. Two cases of Covid-19 have been found in Punta Arenas.

Reality has a knack of hitting home, no matter how far from home one is. The only way is up? Yes, but delayed for now. . .

n Peter Murtagh will be reporting on his trip in The Irish Times and on irishtimes.com and on his own website, Tip2Top.ie, on Twitter @PeterMutagh and on Instagram at tip2topadventure